The Goldilocks of heterogeneous catalysis

An international team of scientists has tethered palladium to a metal–organic framework (MOF) support using thiol groups normally associated with catalyst poisoning. In doing so, the metal centre becomes neither too soluble nor too crowded, but is instead just right for lossless catalysis. 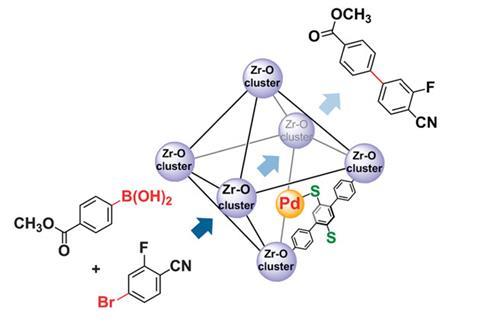 Heterogeneous catalysts, where metal catalysts are supported on an insoluble structure, are easier to recover than soluble homogeneous catalysts. Leaching of the metal catalyst from a support into solution is however a central problem in heterogeneous catalysis. Metals lost to the supernatant can be costly, either in catalyst replacement or additional purification and recovery processes. In drug synthesis there are strict limits on residual metals in active pharmaceutical ingredients. Palladium levels must, for example, be less than 10 ppm for oral intake, and an order of magnitude lower for parenteral exposure.

Catalysed by palladium, the Nobel prize-winning Suzuki–Miyaura reaction is one of the most powerful synthetic procedures for forming C–C bonds between aryl groups and is widely applied in industry to make fine chemicals and pharmaceuticals. Now, Zhengtao Xu’s group at City University of Hong Kong, working with Cheng Wang’s team at Wuhan University, China, and Matthias Zeller at Youngstown State University, US, have virtually eliminated catalyst leaching from a Suzuki–Miyaura reaction system.

‘Our strategy for assembling a thiol-laced framework chimes with Yin and Yang,’ comments Xu. Specifically, chemically hard carboxyl groups on soft thiol-functionalised organic linkers preferentially bind to hard Zr(IV) ions, forming a framework and leaving thiol groups available to bind to a soft metal catalyst. Spatial constraints on the thiol groups anchor palladium to the heterogeneous framework, whilst preventing overcrowding and poisoning of the metal centre.

Their approach is so effective that the reported palladium level in the reaction solution is below the 0.015ppm detection limit of standard analytical techniques.

‘The Xu lab continues to lead efforts in the synthesis of sulfur-derivatised MOFs,’ comments MOF expert Seth Cohen, of the University of Californian in San Diego, US, ‘This work demonstrates how such materials may offer utility in many facets of chemistry, including precious metal catalysis and recovery.’

Omar Farha, an authority in catalytic MOFs at Northwestern University, US, agrees and says the work ‘illustrates the powerful control of linker and functional group location in order to control or eliminate catalyst deactivation.’

Xu hopes their work highlights the importance of rigorously examining the fundamental heterogeneity of these catalytic reactions. More broadly, the team wishes ‘to promote the thiol group for its versatility in functionalising open framework materials’.