Through the looking glass with switchable mirrors 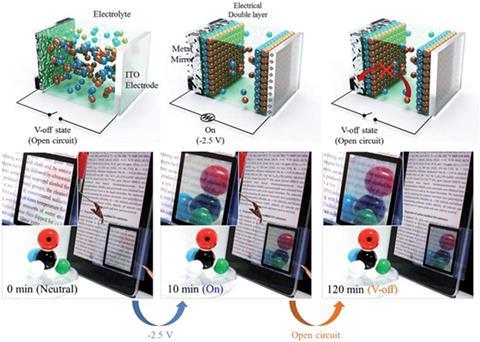 Bromide ion diffusion onto the metal film is forbidden due to the EDL, affording bistability in the switching mirror

Scientists in South Korea have developed a reversible electrochemical mirror (REM) that can switch between a transparent and reflective state, and remain reflective for up to two hours without external electrical power. Such mirrors could be used in smart windows to control lighting and reduce cooling costs for buildings.

The REM, developed by the group of Eunkyoung Kim at Yonsei University, consists of a thin layer of silver-containing electrolyte sandwiched between two transparent electrode panes. When a reduction voltage is applied, a reflective layer of metallic silver is deposited onto the electrode surface. Applying an oxidising potential dissolves the mirror coating by ionising the metallic silver.

Previous mirrors based on metallic thin films were limited by the short lifetime of reflective layer once the power was switched off. Kim and her co-workers solved this problem by using an ionic liquid as the electrolyte. ‘Because ionic liquid induces the development of an electric double layer, which repels anions from the metal surface, the electrodeposited metals can be maintained without external electrical power,’ explains Kim. The researchers also overcame the tendency of the metal coating to rupture during deposition by modifying the electrode surface with thiol groups.

Combining reflectivity and low energy consumption could be useful in building lighting and climate systems. According to Kim, the REMs have advantages over other smart window materials, since their reflectivity can be used to redirect light for illumination or heating purposes in addition to simply blocking light.

Claes-Göran Granqvist, an expert in photochromic materials at Uppsala University in Sweden, sees the work as a step towards practical adoption of REMs: ‘Electrochromism has been known for several decades, and numerous applications have been suggested. Few of these have been realised, however,’ he says. ‘The results shown are beyond the state-of-the art and point towards fruitful areas for further research as well as potential applications.’

Scientists in South Korea have developed a reversible electrochemical mirror (REM) that can switch between a transparent and reflective state, and remain reflective for up to two hours without external electrical power. Such mirrors could be used in smart windows to control lighting and reduce cooling costs for buildings.

Now, the group hopes to speed up the switching process. ‘The switching speed of REM is rather slower than that of other ETS devices,’ says Kim. ‘Thus the remaining challenge will be a research on a fast switching and bistable REM.’