In fine chemical and pharmaceutical manufacturing, single-use (disposable) systems are rapidly becoming more popular with both small and large companies as an alternative to stainless steel reactors and fermentation vessels.

The rise of biological drugs and increasing exploitation of cell-based processes to produce small molecule drugs and building blocks has driven demand for bioreactors that provide a sterile environment for cell culture and growth, and for processes including filtration, purification or virus inactivation. 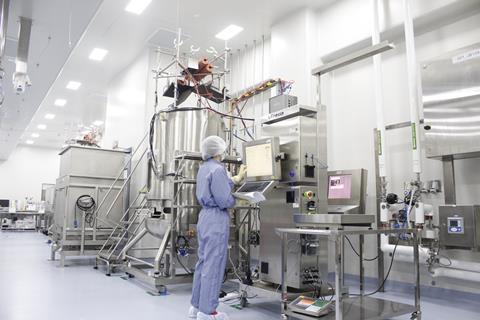 Conventional stainless steel bioreactors are typically used to produce large quantities of product. But ‘an overall trend in the biopharma industry is to develop highly efficient drugs and/or target more niche patient populations’, says Eva Lindskog, marketing director at Lonza’s pharma and biotech division. That means smaller production volumes, and potentially more different products being made at a single facility.

Enter the single-use bioreactor. A sealed, sterile plastic bag is placed inside an outer container (often stainless steel), and can be swapped out for a new one when the process is complete. There are multiple variants available from manufacturers including PBS Biotech, Merck KGaA, GE Healthcare, Thermo Scientific and Sartorius Stedim. The choice depends on the process being employed – for example models that include a pre-sterilised stirrer to mix the contents, or ones where the bag sits on a rocking platform that acts as an agitator.

Once you finish a fermentation run, you’re looking at around 24 to 48 hours of downtime while you clean the system, compared with 10 minutes with a disposable

The systems were initially developed in the 1970s, but ‘there’s been huge uptake in the past decade,’ says Craig Loftus of Cellexus, a Scotland-based company that manufactures the CellMaker bioreactor platform. ‘Everyone’s buying them, across the board – not just small companies. They offer lower initial investment and huge time savings, making the route to market significantly easier for all.’

A Markets and Markets report predicts the market will grow from $818 million (£625 million) in 2016 to $2.7 billion in 2022. It expects Europe to account for the largest share of the global market, while North America is expected to register the highest growth rate from 2017 to 2022.

Single-use systems have three main advantages over conventional systems: they are cheaper, which makes them ideal for smaller companies and/or start-ups; they can be scaled up; and they can significantly reduce downtime for companies producing more than one product

‘Installing a traditional 10-litre bioreactor [to Good Manufacturing Practice standards] is an expensive business,’ explains Loftus. ‘By the time you’ve bought the enclosure, installed it with ancillary equipment, bought the chemicals, plus running costs, you’re looking at around £50,000. With single-use bioreactors, you do still need to buy the enclosure but the initial investment costs are around £34,000–40,000, making the technology more accessible for small biotech companies.’ 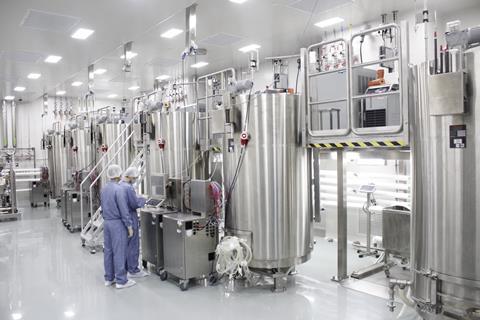 While scaling beyond 2000 litres is tricky in single-use systems, it is easy to run several vessels in parallel for higher volume production

Stainless steel bioreactors must be thoroughly cleaned and sterilised between processes to ensure there is no cross-contamination, which leads to significant downtime. ‘Once you finish a fermentation run, you’re looking at around 24 to 48 hours of downtime while you clean the system, compared with 10 minutes with a disposable,’ Loftus says.

As a user of single-use bioreactors, Lonza’s Lindskog agrees. ‘An important advantage with single-use technology is that it saves time for us and therefore the customer. With disposable reactors, we don’t need to spend time cleaning or doing cleaning validation and sterilisation before setting up the next batch. Also, the capital expenditure with single-use systems is lower and the facility design can be simplified, which helps us to be more agile and respond quickly to our customer’s needs.’ Steam-cleaning traditional vessels also requires large amounts of water and energy, which is eliminated with single-use systems.

But, as with many disposable technologies, challenges remain. One problem is that single-use components are not standardised across different manufacturers. ‘This means that we need to critically assess how all the pieces work together when we apply them in a process,’ Lindskog explains.

Operators need to be specifically trained on the systems they use, she adds. ‘Some steps in the operation of single-use technologies are done manually and these can differ between vendors.’

Another issue is that, while they can be scaled up, scaling beyond 2000 litres is not easy. Single-use systems are most attractive to companies with multiple product lines, producing up to 2000 litres of each product, whereas stainless steel bioreactors are better suited for larger volumes of a single product.

Disposable systems are more environmentally friendly, when you take into account the volumes of water, energy and steam required to clean traditional ones

Certain processes are also more challenging to transfer to single-use systems. ‘This can be for a couple of different reasons, including the formulation of the cell culture media and the specific cell lines themselves,’ Lindskog says. For Lonza, it is imperative to have the knowledge and the experience to be able to transfer between single-use and stainless steel if needed.

And organisations such as Greenpeace have raised concern about the increased use of plastic. Currently, most bags are incinerated after use, to prevent contamination. ‘Any waste that has been in contact with cells is considered a biohazard and has to be incinerated – this accounts for around a third of our single-use waste,’ Lindskog says. ‘The remaining non-hazardous waste is recycled (approximately 50% of total waste) or incinerated for energy production (around 17% in total). None of our plastic waste goes into landfill.’

Recycling the bags is not yet possible. The Bio-Process Systems Alliance (BPSA) – comprising companies active in the biopharmaceutical industry advancing single-use worldwide – explains that the plastics used to manufacture the bags are chemically resistant, compatible with most acids and bases, and biologically inert. But to meet those criteria they use multiple types of plastic, so recycling presents a challenge.

‘Although recycling is viewed as environmentally appealing, it is not amenable to most single-use systems due to low volumes and mixed plastic content,’ says the BPSA. ‘Incineration is a widely-accepted treatment option in both the US and Europe that reduces the volume of waste.’

Nevertheless, Loftus points out that there is one firm in Europe actively investigating ways to recycle the bags, although he couldn’t name the company.

Over the next decade or so, Loftus predicts further growth. ‘Disposable systems are more environmentally friendly, when you take into account the volumes of water, energy and steam required to clean traditional ones,’ he says.

Lindskog identifies three main drivers and trends that are contributing to the increasing use of these systems. Innovation over the past decade has led to more efficient bioprocesses with higher yields and running at higher concentrations. This means, in general, smaller volume reactors can produce the same amount of drug substance. Secondly, the trend towards drugs for rare diseases with smaller patient populations requires smaller production volumes. Lastly, for any given indication, there is increased competition, so any individual company will have a smaller share of the market, and hence manufacture at lower volumes.

‘It is clear that single-use technology is here to stay,’ she says. ‘However, at the same time, we see a continued need for processes that require stainless steel, either because the volumes are high or because the process is not compatible with single-use. For us, the two technologies are complementary.’

Lonza sees an increasing demand for contract manufacturing to support clinical trials and is expanding globally to meet this demand. Its Ibex biomanufacturing complex in Visp, Switzerland, is based entirely on single-use technology. ‘This has enabled us to set up a business model with a contractual commitment to deliver drug product, based on 1kg of drug substance, in 12 months or less,’ she says. ‘And our other clinical facilities in Slough (UK) and Haywood (US) are increasing single-use capacity to match demand.’

Another clear trend is the increasing demand for biological product manufacturing in Asia. WuXi Biologics, a contract manufacturer based in China, has installed and is now testing the world’s largest 4000 litre single-use bioreactor at its commercial manufacturing facility in Wuxi City, Jiangsu. The company says it expects the system will deliver performance comparable to stainless steel systems, but which can be fully customised for different products, resulting in higher cell productivity and faster process transfer and scale up.

Lonza will open its first biologics facility in China next year, with services based on single-use technology. The company is already working with Tracon Pharmaceuticals, through its site in Singapore, using single-use reactors to supply clinical trials of antibody cancer treatment carotuximab. If the drug is approved, Lonza will take on commercial production at the same plant. ‘The faster set up times for single-use facilities can be an advantage when moving quickly into new territories,’ Lindskog concludes.