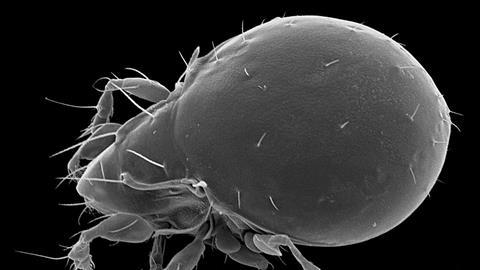 Although the Oribatula tibialis mite is only the size of a pin head, it packs a punch when it comes to defending itself from predators. It produces a compound that releases hydrogen cyanide – one of the quickest acting and most toxic poisons – when it comes into contact with an attacker’s saliva.

Of the 80,000 known arachnid species many use toxins to kill their prey or protect themselves, but the soil-dwelling oribatid mite is the first to defend itself using hydrogen cyanide – a poison usually only found in plants like the South American cassava and in a handful of other animals, most of them insects. 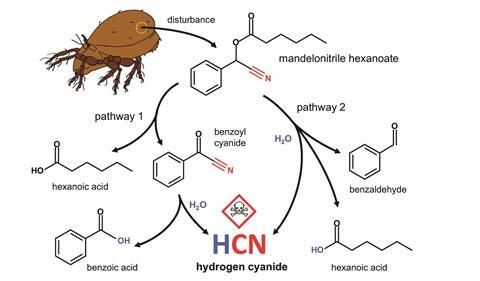 The mite stores cyanide as mandelonitrile hexanoate in oil glands to avoid poisoning itself. If a predator eats the mite the cyanide precursor compound is hydrolysed on contact with water leading to the release of hydrogen cyanide – a potentially deadly surprise

Michael Heethoff and his team from the Technical University Darmstadt, Germany, were surprised to find that the Oribatula tibialis mite secretes a hydrogen cyanide precursor from its oil glands when attacked by predators such as centipedes. To avoid poisoning itself, the mite stores hydrogen cyanide in the form of mandelonitrile hexanoate. This compound hydrolyses on contact with moisture, for example from the predator’s saliva, to release the active poison. A mouthful of deadly hydrogen cyanide not only deters attackers, but might also make sure that the same predator will never bother the mite again.