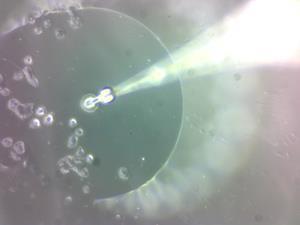 US researchers have broken into individual living cells with inexpensive probes that can suck their contents directly into a mass spectrometer (MS). Zhibo Yang and Anthony Burgett from the University of Oklahoma say this will help study cells that are hard to obtain or culture, like stem cells and patient samples. ‘There is no sample preparation and no delay between sampling and analysis,’ Yang observes.

Often, cells’ contents are analysed after they’re physically broken open using high frequency sound waves. However, this gives measurements averaged across many cells in the sample, whereas Burgett and Yang wanted to map molecular distribution across biological tissues. They started with a relatively wide-bore tip that pushes out solvent and quickly sucks it back up into the spectrometer for analysis.

Seeking finer detail, they shrunk this tip design below 10µm in diameter. ‘The tip size became smaller than a cell, so we decided to use the technique for single cell analysis,’ Yang says. Lowering their ‘single-probe’ in 0.1µm steps, the Oklahoma team penetrated individual cultured ‘HeLa’ human cells, first detecting metabolites like adenosine phosphates and lipids like phosphatidylcholines. They then moved on to studying living individual HeLa cells that had been treated with solutions of cancer drugs, later washed off with buffered saline. Even after the drugs could no longer be detected in the saline, the single-probe analysis found them inside the cells. 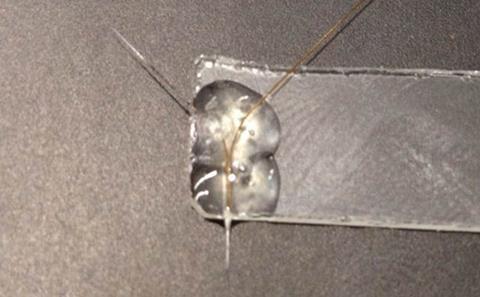 The tips are cheap to make and easy to replace

This isn’t the first MS analysis on sucked-out cell innards. Tsutomu Masujima, now at the RIKEN research institute in Osaka, Japan, pioneered the idea. However, his process has two steps: after a first sucking step, he then adds solvent needed to ionise the extract inside the mass spectrometer. Masujima therefore calls putting a solvent inlet and suction outlet right next to each other in the single-probe a good idea. ‘However, this method is very hard to control and not sensitive enough to detect tiny concentrations,’ he warns.

Nevertheless, Yang and Burgett underline their approach’s practicality. Whereas Masujima’s approach takes around five minutes per cell, theirs takes three. Their setup includes a heating coil that helps clear blockages; and if that doesn’t work, replacing the single-probe takes just a few minutes. Also, as they’re made of quartz, each single-probe tip costs only $5 (£3). Yang hopes that such advantages ‘will usher in a new era where single cell MS analysis is a universally employed technique’.