The red planet might once have had an atmosphere as thick as Earth’s, but has since lost most of its gases to space 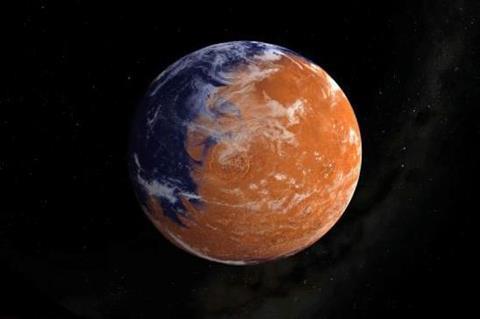 Over the last four billion years, Mars has lost most of its gases to space, research suggests. The red planet might have once had an atmosphere as thick as Earth’s – mostly consisting of carbon dioxide – but a constant stream of energetic particles from the sun has since eradicated most of it.

Bruce Jakosky from the University of Colorado, US, and his team suggested this scenario after analysing argon isotope data from the Maven space probe, which has been orbiting Mars since 2014.

The scientists found that the planet is rich in one argon isotope, 38Ar, but depleted of the lightest, 36Ar. The latter naturally accumulates in the upper atmosphere, where it is ejected into space by colliding with high-energy solar wind particles. Calculations show that Mars might have lost as much as 66% of its lightest argon isotope as well as large amounts of other gases over the last 4 billion years.

In its early life, Jakosky suggests, Mars might have had a thick carbon dioxide atmosphere, which could have even allowed liquid water to exist on its surface. But after losing most of its atmosphere, the red planet’s surface transformed into the cold and dry desert landscape we know today.