Some wags suggest that size doesn’t matter, but tell that to the chemists who have just broken the world record for the longest carbon–carbon bond ever made.

Until March 2018, Peter Schreiner’s team at the Justus Liebig University Giessen, Germany, had held the record for longest carbon–carbon bond since 2011 with a 1.7Å alkane bond. Their record was toppled by Yusuke Ishigaki and Takanori Suzuki of Hokkaido University and their colleagues with a carbon–carbon bond in a dispiro(dibenzocycloheptatriene) that was 0.1Å longer, making it 1.2 times the length of a conventional alkane bond. 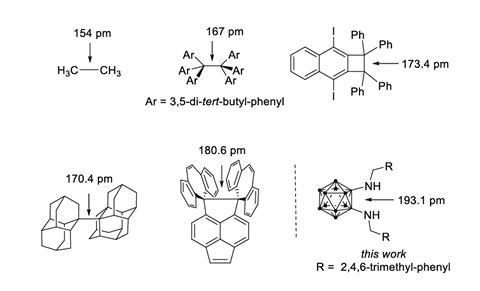 Now, Xu-Qiong Xiao and his team at Hangzhou Normal University, China have synthesised a series of 1,2-diamino-o-carboranes that have carbon–carbon bonds in their inner cluster that range from 1.63Å to just over 1.93Å. The latter is a staggering length given the received wisdom on carbon–carbon bonds sets them at 1.54Å. As Schreiner has pointed out in the past, such extended bonds repeatedly urge us to ask when is a bond not a bond? Xiao and colleagues point out in their paper that ‘unusually large deviations from this standard bond length challenge bond theory’.

Commonly, undue ring strain or other constraints, such as steric congestion or electronic perturbations, stretch and distort not only the bonds themselves but our concept of the chemical bond. As well as those compounds synthesised by Schreiner and others there are substituted 3,8-dihalobuta[b]naphthalenes, compounds with diamondoid substituents, and dispiro(acridan)-substituted pyracene and acenaphthenes that have exceptionally long carbon–carbon bonds. But, none quite as long as that in the new compounds from Xiao and colleagues.

The team explains that density functional theory (DFT) carried out by their collaborator, Thomas Müller of Carl von Ossietzky University of Oldenburg, Germany and his team, suggests that the carbon–carbon distances in their compounds are controlled by negative hyperconjugation between the lone pairs at nitrogen atoms and the antibonding orbitals of the carbon–carbon bond. It was already known that o-carboranes contain longer than normal carbon–carbon bonds, but the researchers have certainly stretched the point. 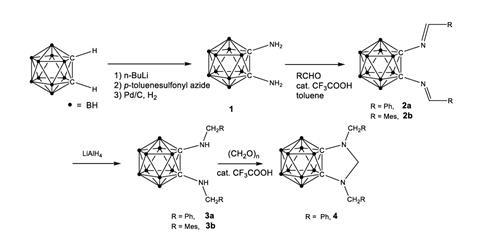 Critically, the team’s theoretical analysis suggests that there is nothing exotic about their long carbon–carbon bonds other than their length. ‘Based on our analysis, we conclude that even the much stretched carbon–carbon bond in the secondary amines are regular carbon–carbon bonds,’ they report. They add that stronger electron-donating substituents would allow the bonds, and thus the cage, to be opened up to functionalisation.

Schreiner, now at the University of Georgia, US, points out that there is a distinction between his team’s work and that of others searching for long bonds. ‘Our long bond is intermolecular,’ he says. ‘That is, the two molecular halves can be separated infinitely upon dissociation. All other cases are intramolecular, ie separation of even full dissociation is not possible because the rest of the molecule holds everything in place. The second case is much simpler, of course.’ He adds: ‘We reported the longest carbon–carbon bond in an alkane, and this record still stands.’

Correction: This article was updated on 7 December to correct the length range of carbon-carbon bonds in the series