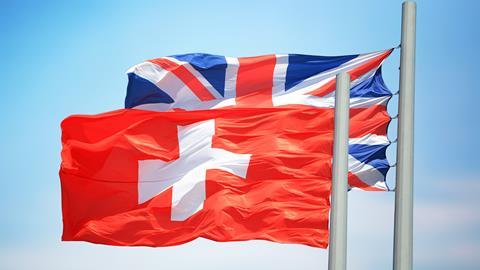 UK Research and Innovation (UKRI) and the Swiss National Science Foundation (SNSF) have signed an agreement that aims to foster scientific collaboration between the two countries. The move comes against a backdrop of uncertainty for researchers in both countries, who face the possibility of being frozen out of the EU’s €95 billion (£80 billion) Horizon Europe funding programme.

In a joint statement, UKRI and SNSF announced that terms of a new partnership were formalised on 8 February. The agreement aims to reduce barriers for researchers and enable cooperation between the two countries on four broad research priorities: synthetic biology, languages, materials and the life and physical sciences interface.

Grants of up to £25,000 are currently being advertised on UKRI’s website to help UK-based researchers develop new and existing partnerships with colleagues in Switzerland. The SNSF is offering similar funds to Swiss researchers.

‘The UK and Switzerland have thriving research communities with successful collaborations over many years,’ said UKRI chief executive Ottoline Leyser. ‘UK Research and Innovation is committed to maintaining and growing its partnerships with outstanding research and innovation funders across the globe. This agreement with the Swiss National Science Foundation represents the next step in our successful alliance.’

‘Among all international collaborations reported in SNSF grants, the UK is among the three most frequently cited countries. We are committed to help the research communities in Switzerland and the UK join their efforts,’ added Matthias Egger, president of SNSF’s national research council.

The announcement of the new research partnership comes around six months after Switzerland was ejected from the EU’s Horizon Europe research funding programme. That move came in response to political tensions between the EU and the Swiss government, with the Swiss Federal Council walking away from a trade agreement that would have brought closer integration with the bloc.

The Swiss situation mirrors the uncertainty that currently hangs over the UK’s participation in Horizon Europe. While the UK is currently slated to be an associate member of the research programme, a formal agreement remains unsigned due to ongoing political wrangling over the Northern Ireland protocol.

This week, hundreds of European researchers and organisations launched the Stick to Science initiative, calling for ‘political barriers that having nothing to do with science’ to be put aside. The signatories want the EU, UK and Switzerland to quickly settle association agreements over the Horizon programme, noting that ‘advancement in [research and innovation] is best achieved when all actors in science and innovation work together across geographic boundaries’.