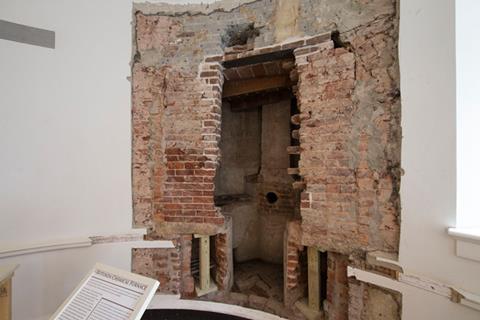 Part of a US university’s original chemistry lab has been discovered by builders after it had remained hidden behind a wall since the mid-19th century.

The chemical ‘hearth’ – a small semi-circular alcove containing the remains of a furnace and stone work surfaces – was discovered on the ground floor of the University of Virginia’s Rotunda building by workmen carrying out renovation work.

Architects based at the university believe the hearth was part of the original science laboratories set up by John Emmet, the university’s first professor of natural history, in the 1820s. Inside are two fireboxes, fed by underground air tunnels, where wood and coal would have been burned to provide heat for reactions, and five workstations cut into the countertop where pupils may have worked. The area is thought to have been sealed into the wall in the mid-1840s when the chemistry lab was moved to the southwest wing of the Rotunda, and has stayed hidden ever since, although other parts of the lab infrastructure were uncovered during similar renovations in the 1970s.

The university say they want to preserve the hearth, and will put it on display once the renovation work is completed in 2016.