Chemists in Germany have synthesised tetrachloridotetraformonitrileuranium(IV), [UCl4(HCN)4] – one of very few examples of a complex with hydrogen cyanide as a ligand, let alone one containing uranium. 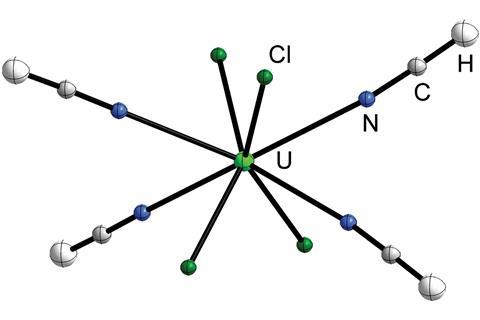 Cyanide features in many branches of chemistry because it can stabilise a wide range of oxidation states and stereochemistries to make compounds with interesting structures and properties. And although chemists have not studied cyanide chemistry of 4f and 5f-elements to the same extent as they have for transition metals, the field is gradually gaining momentum. A coordination compound containing hydrogen cyanide, however, is tremendously rare, regardless of its coordination centre.

To make [UCl4(HCN)4], Florian Kraus, from the University of Marburg, reacted uranium tetrachloride with anhydrous hydrogen cyanide. Central to the molecule is a uranium atom attached to four chlorine atoms and four hydrogen cyanide molecules, via nitrogen. The compound forms a moisture sensitive turquoise microcrystalline powder that is relatively stable at room temperature, if free from residual hydrogen cyanide.