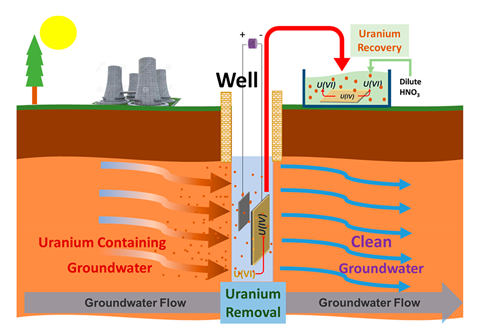 An electrochemical technique could prevent the spread of uranium in contaminated groundwater and provide a new way to source material for use in nuclear fuel.

Uranium is a naturally occurring element commonly found in groundwater at locations around the world. It can also enter the water at sites affected by contamination – for example, following uranium mining, or the use of nuclear fuels and weapons. Techniques used to stop the spread of this toxic radionuclide involve reducing mobile uranium species into insoluble sediments. However, these precipitates can be reoxidised, meaning the risk of uranium re-entering the groundwater remains.

Now, researchers in China have developed a titanium electrode that provides a way to remove the uranium from contaminated water supplies. In testing, the electrode reduced uranium in water to levels safe to drink. 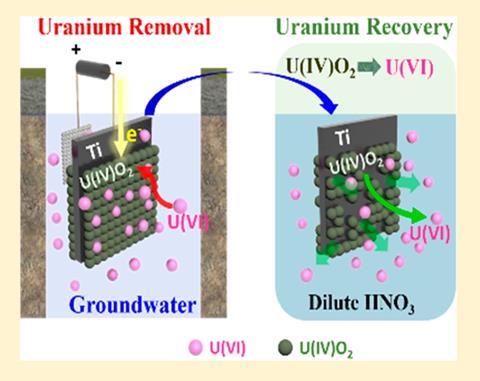 The electrochemical technique can not only be used to remove uranium from groundwater, this uranium can also be recovered and could be used to fuel nuclear power plants

‘Our direct electro-reductive method uses a titanium plate as the working electrode and U(VI) is reduced to U(IV)O2 and accumulated on the surface of the electrode,’ says lead researcher Fubo Luan from the Chinese Academy of Sciences, Beijing. ‘The amazing thing is that the accumulated U(IV)O2 on the surface of the electrode can further catalyse the electro-reduction of U(VI).’ Luan explains that the uranium can then be removed from the electrode’s surface by dipping it in dilute nitric acid – offering an easy way to recover the material.

Luan and his co-workers suggest that the electrodes could be used in wells drilled around contaminated sites. To demonstrate this, they tested the electrode on groundwater collected from a uranium-containing well in China’s Shandong province. Treatment with the electrode removed 97% of the uranium, bringing the sample below the US Environmental Protection Agency’s limit (0.13µM) for safe drinking water.

‘There are many communities around the world that rely on groundwater for their drinking water but it contains uranium above health guideline values,’ says Richard Collins, an expert in uranium geochemistry from the University of New South Wales, Australia. ‘Inexpensive water treatment technologies aimed at removing uranium from these water resources are needed for these communities.’ Collins notes that while electrochemical removal of uranium from contaminated environments has been researched for many years, it hasn’t yet translated into a viable water treatment technology yet.

Luan hopes his team’s technique might be able to do just that. ‘We believe this method could be widely used in the future for the purposes of uranium remediation and/or uranium recovery in groundwater and even in uranium-containing wastewater,’ he says. The team are now conducting field trials in northern China.