Chemists have demonstrated that uranium can take part in multi-electron transfer reactions, in the first clear example of a single metal four-electron reduction process involving an element from the f block.

Both the masked U(II) and the analogousU (II) complex effect the transfer of two electrons to diphenylacetylene, allowing the isolation of a rare example of a uranium metallacyclopropene

Combining a uranium centre with redox active ligands capable of storing electrons and rendering them available to oxidising agents has previously allowed redox reactivity involving the transfer of two electrons. Now, a team led by Marinella Mazzanti from the Swiss Federal Institute of Technology in Lausanne (EPFL), has shown that a monometallic uranium (ii) complex can promote the four-electron reduction of azobenzene, giving a uranium (vi) product. A masked uranium (ii) species and an actual uranium (ii) species can both cleave the strong double bond of azobenzene by two sequential transfers of two electrons, giving a bis(imido) uranium (vi) species. 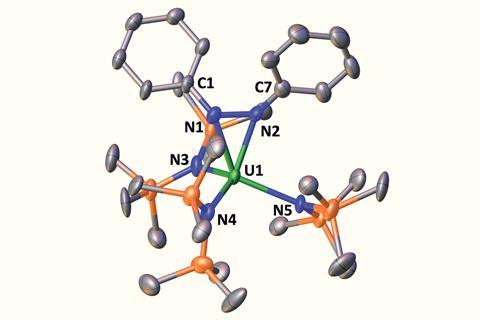 By isolating an intermediate, [K(2.2.2-cryptand)][U(N2Ph2){N(SiMe3)2}3], at low temperature, the team provide evidence that the four electron process takes place in two steps.

These results could be useful for other reactions as it means that uranium (II) on its own can provide four out of the eight electrons required, for example, in dinitrogen reduction. Mazzanti says that ‘ideally, building a polynuclear complex containing two actual or masked uranium (ii) species should lead to complexes very effective for N2 reduction.’

David Mills, an inorganic chemist at the University of Manchester, UK, comments that ‘the rapid expansion of available oxidation states in this area of the periodic table is providing new opportunities to exploit their redox chemistry and expanding such chemistry for relatively abundant elements could be transformative.’