The device could find use in remote locations

Microbial fuel cells (MFCs) use bacteria to generate electricity from waste fluids. However, they are hindered by expensive and toxic components, low power output and lengthy inoculation periods, with the mobile phone-charging MFCs requiring bulky and specialist materials. In contrast, the new paper-based MFCs from Jonathan Winfield, at the Bristol BioEnergy Centre, and co-workers are much smaller, lighter and cheaper. 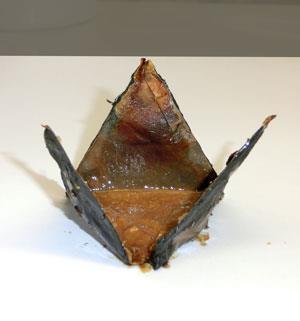 After investigating various origami structures and different paper types, the team settled on a pyramid-style design. This serves as the proton exchange membrane and reactor body, creating an internal anode chamber. An external waterproofing layer made from three layers of a conductive latex solution avoids any unpleasant leaks and also doubles as the cathode. Electricity producing bacteria in the form of dormant biofilms quickly revive when fed urine, even after long periods of desiccation and cold storage. These clever constructs ensure the membrane and electrodes are in close proximity, and generate enough power to power a transceiver just 35 minutes after activation. A feat that biochemist Gajanan Ghodake, of Dongguk University in South Korea, finds ‘quite astounding’. And two cells connected in series broadcast radio signals through a transceiver at roughly 6 minute intervals for 24 hours; a potentially lifesaving signal for an explorer in trouble.

They are also versatile. Any urine should work, even from cattle, although more concentrated urine produced first thing in the morning gives the best response.

Winfield says the potential of these paper MFCs is boundless, pointing out that ‘as long as humans walk the planet there will never be an absence of urine’. The cells could be arranged in interlocking stacks and flat-packed for easy transportation. Uses might then include backup or temporary power for remote locations, developing countries, or simply a garden shed.

‘This is an exciting study, by a very talented group of engineers who have been redefining the art of microbial fuel cells over the last decade,’ comments Plamen Atanassov, director of the Center for Micro-Engineered Materials in New Mexico, US. ‘I keep being fascinated by their inventiveness, fantasy and drive to bring these new energy harvesting devices to practice.’

The Bristol team’s ultimate goal is to power a biodegradable robot with inexpensive and environmentally safe MFCs. Initial experiments show that an unusual range of materials can be used, including natural rubber from laboratory gloves and condoms, bioplastics, gelatine and even egg; leading Winfield to remark that a trip to the rubbish tip could provide enough material to build the bulk of a fuel cell.