UK-based researchers have devised a way to turn waste trifluoromethane into a useful reagent for introducing fluorinated building blocks into drug compounds.1

Trifluoromethane (HCF3) is a waste product formed in the production of chlorofluorocarbon refrigerant gases. It is also a greenhouse gas with a global warming potential 11,700 times higher than CO2. As it poses such a high environmental risk and has few applications, it is either stored or destroyed.

Now, researchers led by Mark Crimmin at Imperial College London have developed a method for converting trifluoromethane into a reagent that can insert difluoromethyl (CF2H) groups into molecules during pharmaceutical synthesis. 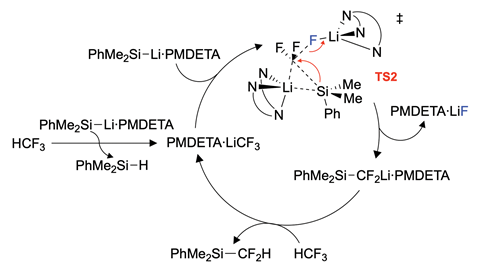 Crimmin’s team has shown a simple silyl lithium reagent can break the strong C–F bond in trifluoromethane at room temperature with the reaction completing within five minutes. Researchers from Japan have demonstrated a similar reaction previously where they react the equivalent boryl lithium reagent with HCF3. They proposed a mechanism but did not test it.2

The team at Imperial College conducted a mechanistic study. They say that this was the hardest part of the research, as the reaction was too fast for traditional kinetics techniques. To overcome this, the researchers turned to computational studies to gain better insight into the mechanism. Their calculations support a mechanism in which the silicon reagent seems to be acting as both a catalytic base and a nucleophile. CF3H first undergoes a deprotonation to form a trifluoromethanide intermediate, which is then susceptible to direct nucleophilic attack.

‘This type of reaction would generally require expensive or ozone depleting sources such as HCF2Cl to synthesise the R3SiCF2H reagent, for which more sustainable solutions are needed,’ explains Tatiana Besset, an organofluorine researcher at the University of Rouen in France. ‘But it’s very interesting to see how a greenhouse gas and a fluorinated byproduct coming from industry waste, was used to generate a highly valuable nucleophilic difluoromethylating source.’

‘We are looking to scale up the synthesis beyond the gram-scale,’ says Crimmin. ‘We have some concerns about potential safety issues here, as the reactions are exothermic, and so plan to use flow chemistry to do this.’ Crimmin says they also have plans to collaborate with another research group to investigate radiolabelling in the reaction.