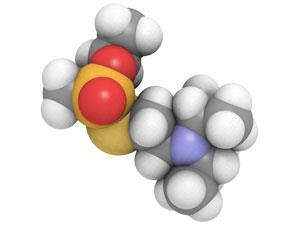 This week, hold your nerve, as Simon Cotton’s got a weapon. A chemical one though, of course.

As far as it is possible for an inanimate object to become a film star, VX has that sort of celebrity – or maybe infamy.

VX is what is generally known as a nerve agent. Some people call them nerve gases, but in fact they are all liquids at normal temperatures. They are indelibly associated with war and weapons, though they have never been used in a conventional war. 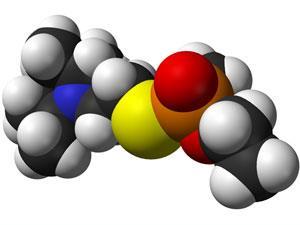 VX wasn’t the first nerve agent to be made, that was tabun. No one planned to make a nerve agent, the German chemist Gerhard Schrader was trying to make a synthetic insecticide that would be cheaper than nicotine.  On December 23rd 1936, he obtained a clear, colourless liquid, which in even very dilute solution killed 100% of leaf lice on contact. That wasn’t all - spilling even a tiny drop in the laboratory gave a vapour of which, as Schrader said: ‘the first symptom noticed was an inexplicable action causing the power of sight to be much weakened in artificial light. In the darkness of early January it was hardly possible to read by electric light, or after working hours to reach my home by car.’ Schrader and his assistant had to stop work for 3 weeks. Further tests on mammals showed it was far too toxic to be used as a commercial insecticide.

The German armed forces, the Wehrmacht, saw its potential as a successor to chlorine and mustard gas as a weapon. They began constructing a plant to manufacture it in 1939, though it did not start production for over two years, partly because of the dangerous nature of tabun. At least 10 workers were killed during the plant’s operation. By that time, Schrader had already discovered a different and more toxic nerve agent, sarin, and the Germans began a plant to make that too, though production did not begin before the end of the war. Fortunately, no nerve agent was used during world war two. For one thing, the Germans knew that the principles by which nerve agents worked were common knowledge, so they assumed that the allied powers would have similar weapons too.

After world war two, both the Western powers and the Soviet Union had nerve agents, but efforts to make better ones continued. Ironically, the next discovery again arose from pesticide research – after world war two, just as after world war one, agricultural scientists were working hard to improve crop yields. Just as Schrader was disappointed that the pesticide he had made was too toxic for its purpose, the same thing happened when British chemists at a subsidiary of ICI developed a new pesticide they called “amiton”, which had to be removed from sale. Research was taken on by the Porton Down Chemical Weapons Research Centre, near Salisbury, and they developed the agent known as VX. Very soon Britain renounced chemical warfare, and they did a deal with the Americans, swapping VX for information on thermonuclear weapons. 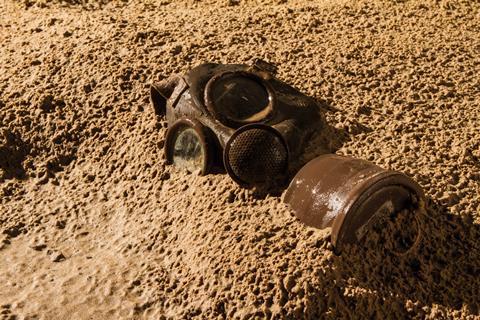 Production of VX began in 1961; although it is less volatile than tabun or sarin, it is more toxic. Aerosols of VX are deadly and it can also be absorbed through the skin. There were over 3000 fatalities on one occasion when VX was tested, but fortunately these casualties were sheep. On March 13th 1968, a jet aircraft came in over the chemical weapons proving ground at Dugway in Utah, releasing a spray of VX during trials. Unfortunately something went wrong, and the discharge of VX killed or injured 6000 sheep grazing nearly 30 miles away in the area appropriately known as Skull Valley.

None of the major world powers are known to have used nerve agents, but it is now believed that Saddam Hussein used sarin – amongst other chemicals - against Kurdish citizens in Halabja in March 1988, leaving an estimated 5000 dead. The only fatality associated with VX occurred in 1994 when two members of the Japanese Aum Shinrikyo cult used VX to assassinate a former member of their sect.

But VX obtained much greater exposure as a member of the cast of the Sean Connery–Nicholas Cage film, The rock. A group of renegade US Marines stole rockets carrying VX and seized control of the former Alcatraz prison, overlooking San Francisco, threatening to launch the rockets at the city unless a ransom is paid. Cage plays the part of a chemical warfare specialist who is part of the team charged with regaining control. At the end of the film, when the last surviving villain is trying to strangle him, Cage thrusts the last VX-containing capsule into the villain’s mouth and hits him. The capsule breaks, killing the villain, whilst Cage injects himself with atropine, the antidote. So VX ends up on the side of the good guys.

So all ends well.  That was Birmingham University’s Simon Cotton, with the unnerving chemistry of VX. Next week, a compound that comes in useful when you’re a bit clumsy.

Superglue is a handy addition to any DIY enthusiast’s toolkit. I remember once accidentally breaking one of my mum’s favourite china figurines.  I expected a severe telling off for this, but to my relief my dad was able to fix it in five minutes with superglue and replace it on a high shelf, good as new. It’s still in my parents’ house, and to this day I have no idea whether my mum ever realised it had been broken.

The secret to superglue’s stickiness…

Ah! You’ll have to wait to find that out by joining Emma Stoye in next week’s Chemistry in its Element. Until then, thank you for listening, I’m Meera Senthilingam.