The pollen and nectar of wildflowers can contain higher levels of neonicotinoid insecticides than nearby crops, according to a new study. 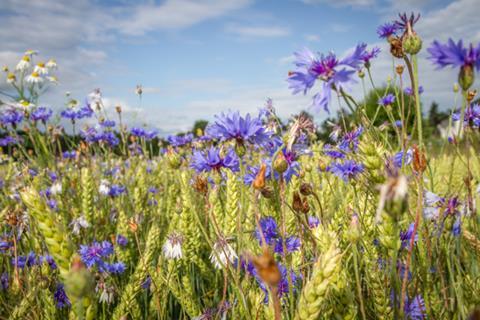 Honeybees prefer to collect pollen from wildflowers, which are often contaminated with neonicotinoids

A team from Sussex University in the UK found that the pollen of wildflowers, such as hogweed and poppies, within one to two metres of an oilseed rape crop, contained neonicotinoid concentrations up to 86 parts per billion (ppb) in pollen. The maximum pesticide residue recorded in crop pollen was 11.1ppb.

The use of neonicotinoids has become controversial in recent years and has been blamed for a decline in pollinators and contributing to honeybee colony losses. In 2013, the European Union restricted the use of these insecticides.

‘The hogweed [pollen] was 86ppb, which is over 10 times what is normally found in the crop, so it may be that different plant species differ in their propensity to suck up neonicotinoids from the soil,’ says senior study author Dave Goulson. ‘The concentrations in the wildflowers were very variable, much higher than in the crop.’

Neonicotinoids were consistently found in the soil at field margins and this was deemed the most likely source of wildflower contamination. They are persistent in soil, says Goulson, and soil samples commonly came up positive for imidacloprid, even when farmers had not used them for at least three years.

The team found that 97% of neonicotinoid residues on pollen from honeybees came from wildflowers, while only 3% came from oilseed rape. It is already know that honeybees are not keen on the pollen of oilseed rape. Honeybee foragers from five hives brought back a total of 71.8 nanograms of neonicotinoid residues each day, on average, in June, and 11.1 nanograms in August. These concentrations are lower than those likely to cause significant harm to colonies in the short term, the study authors note.

‘[Our findings] mean any insect living in hedgerows is likely to be chronically exposed,’ Goulson says. ‘Whether the concentrations are high enough to cause significant sub-lethal effects is not something we have addressed here, but it certainly shows lots of organisms will be exposed.’ However, he notes that sub-lethal levels have been linked to damage to honeybee immune systems.

Julian Little, spokesperson for Bayer Crop Science, says the paper is ‘very much aligned with the idea that if you can find something, it must be doing harm, which goes against what we know about chemistry: it is the dose that makes the poison’. He also questions the relevance of the figures. ‘If you go with the highest imaginable levels in oilseed rape, it won’t have an effect on honeybees. So why imagine that foraging on wildflowers would be any different?’

Bayer is currently awaiting the results of experiments being conducted by the UK’s Centre for Hydrology & Ecology on neonicotinoids in oilseed rape in England, Hungary and Germany. ‘We are very hopeful that when those results are published sometime next year neonicotinoids will be given a clean bill of health,’ says Little.

‘It appears these chemicals really are ubiquitous in the environment – bees simply cannot get a respite,’ comments Geoff Williams, a honeybee biologist at the University of Bern, Switzerland. ‘It also demonstrates that much more work is needed to understand how these substances are moving through the environment.’