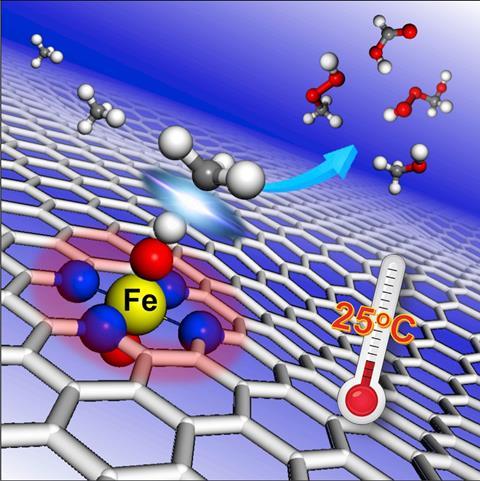 Single iron atoms embedded in graphene can catalyse the conversion of methane into methanol at room temperature.

There is an abundance of methane in natural gas reserves and shale gas, which is usually burnt for power production. However, methane has a lot of potential as a chemical feedstock. Unfortunately, the relative inertness of methane with its strong C–H bonds means that oxidative coupling and direct dehydrogenation processes have to be carried out at temperatures between 600 and 1100°C.

Enzymes can catalyse methane oxidation under mild conditions, but these all require complex co-enzymes, and their rates are not commercially viable. Noble metals can catalyse conversions in strong acid, but still at relatively high temperatures and costs. Molecular sieves, electrical approaches and photochemistry have brought the temperature down somewhat but the room temperature conversion of methane remained a pipedream.

Now, Xinhe Bao of the Chinese Academy of Sciences and colleagues have found a way to activate methane that does not involve high temperature conversion with expensive noble metal catalysts. The team screened transition metals – manganese, iron, cobalt and copper – embedded in graphene to search for an alternative to noble metal catalysts. None of the metals showed any catalytic activity in this setting with the exception of iron.

The researchers then used theoretical models, backed up by experimental work, to unravel the mechanism by which the graphene-supported FeN4 moieties convert methane to methanol. They suggest that the conversion proceeds via an O–FeN4–O active site radical pathway that ultimately generates methyl hydroperoxide and methanol. They add that these materials can then be further catalysed to make hydroperoxymethanol and formic acid, again at room temperature.