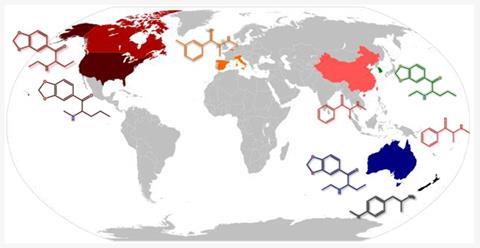 An Australian team has found evidence of new psychoactive substances in use around the world by analysing sewage. The development could help health authorities stay appraised of the types of drugs in use

Chemical analysis of sewage in 10 countries over Christmas and new year 2020–21 has shown how new psychoactive substances have spread across the world. One designer drug, the mephedrone analogue 3-methylmethcathinone, was found for the first time in New Zealand, having previously only been reported in Europe and North America.

Over the last two decades, there has been an explosion of designer drugs that are being sold mostly over the internet. Designer drugs are analogues of controlled substances meant to mimic their effects but evade drug laws – hence why they’re sometimes called legal highs. They are usually structural isomers of the original drug or have an added functional group.

The designer drug market is constantly evolving, with new compounds becoming available while others fall out of favour as they attract governments’ attention. ‘You can never quite predict what the new generation of compounds are,’ says Cobus Gerber from the University of South Australia.

His team has now followed the trail of designer drugs by analysing wastewater from 25 treatment plants in 10 countries over a nine-day period starting on 26 December 2020. Gerber’s team discovered that substances previously confined to Europe and North America had spread around the globe including to Australia, New Zealand, South Korea, China and Fiji. Despite Covid lockdown restrictions in place in many countries, drugs were consumed at similar levels to the same time a year earlier.

Out of the 27 new psychoactives the researchers tested for using liquid chromatography−mass spectrometry, they found 11. ‘The two compounds in particular that we found were very widespread now are eutylone and 3-methylmethcathinone,’ Gerber says. Both compounds are related to cathinone, the alkaloid in khat. 3-Methylmethcathinone had never before been reported in New Zealand.

While analysing sewage can’t distinguish between the substance having been consumed or simply dumped down the drain, the latter is unlikely when it comes to designer drugs. ‘These are not substances people buy in bulk amount and then distribute,’ Gerber explains. ‘The chance of anything being dumped tends to be relatively low compared to other drugs where sometimes we see these massive spikes on a day, and you realise it must have been because there was a police raid pending.’

‘It’s extremely hard to track these new chemicals,’ comments Arjun Venkatesan from Stony Brook University, US, who works in wastewater-based epidemiology for public health monitoring. He commends Gerber’s team for taking an international approach in a field that usually focuses on local communities. ‘I think that is extremely important because you want to standardise the approach so that it can be applied to different places and different scenarios, and the results can be compared to understand larger trends,’ Venkatesan adds.

Compared with surveys or healthcare monitoring, analysing drug usage through wastewater can identify potential new threats almost in real time. ‘The drugs that appeared in this study, within a week of us receiving the samples, we had already reported to our South Australian drug early warning system,’ Gerber says. ‘Wastewater epidemiology allows us to report a compound being present in a community before it leads to deaths.’