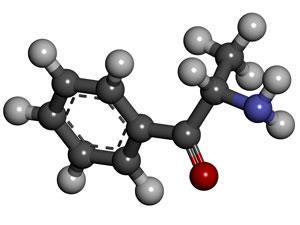 Simon Cotton introduces us to cathinone, the active ingredient in the stimulant Khat

This week, it’s story time with Simon Cotton, who is chewing on some rather special leaves…

He was actually referring to some green leaves. Khat, or cott, is the name given to the leaves of an evergreen shrub (Catha edulis) that grows in East Africa; some call it ‘the flower of paradise’. The leaves are chewed by many people in countries like Yemen, Somalia and Ethiopia, in much the same way that coca leaves are chewed in South America. Cathinone is the active ingredient, along with a similar molecule called cathine (not to be confused with caffeine). 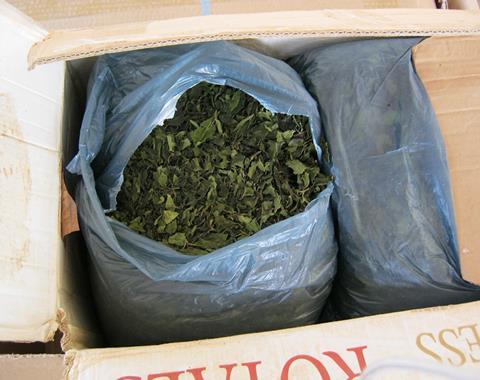 Shipment of Khat seized by US officials

Together with coffee, it is an important cash crop in the Yemen and much is exported, not just to neighbouring Ethiopia and Somalia, but further afield – it is air-freighted into destinations like London for sale to expatriate communities. The reason for this is that once the leaves are picked, the cathinone is oxidized quite fast, within a couple of days. Because of this, only fresh leaves are active and buyers select those.

Khat is a social drug, used by people to relax, and in Muslim countries it offers a high that is not banned by the Koran. It is especially important in the Yemen, where something like 60% of men are regular consumers. Chewing sessions normally begin after lunch, going on until dusk, and people are concerned that this is an economic problem - both for the individual and the state - this over the lost hours of work and also because khat cultivation uses huge quantities of water.

Around 60 tonnes of khat are imported into the UK each week leading to claims of its abuse by immigrant communities, especially Somalis. It’s also been claimed that much of the UK import is surreptitiously re-exported to Europe and the USA. Khat is not illegal in the UK, but it is banned in other countries, including France, Germany, the Netherlands and the United States.

Cathinone has a similar structure to amphetamine, in that they are both phenylethylamines – a short chain of carbon atoms with an amine group at one end and a phenyl ring at the other. But where amphetamine has a CH2 group on the beta position of the carbon chain, cathinone has a carbonyl group. It is a stimulant, and some people have compared the effect of its consumption with drinking strong coffee. It is thought to be a relatively safe drug, but can produce symptoms similar to amphetamine: people become very alert, cannot sleep, and may have heart palpitations. A case-control study has shown that heavy khat chewers have nearly a 40-fold increased risk of a heart attack. 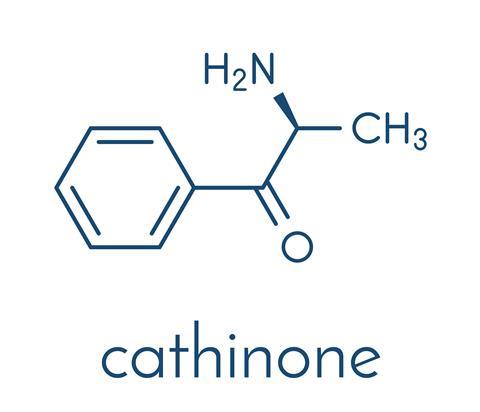 If you replace a hydrogen atom in the amine group in cathinone with a methyl group, you have a molecule called methcathinone. Methcathinone is totally synthetic and does not occur in nature. It can be made from ephedrine and has produced amphetamine-like symptoms when abused, notably in Russia.

You probably haven’t heard of methcathinone, but you will have heard of mephedrone. This has a structure similar to methcathinone, but with an extra methyl group attached to the benzene ring. It was first made around 1929 but languished in obscurity for most of that time until it was rediscovered ten years ago and marketed as a legal high.

Regarded as an alternative to ecstasy or cocaine, mephedrone took off worldwide around 2008 once it could be purchased over the Internet, not least because ecstasy supplies became unreliable. Within a short while, doctors were seeing patients who exhibited symptoms including chest pains, high blood pressure and a racing heart. It seemingly worked like amphetamines, boosting levels of neurotransmitter molecules like dopamine and noradrenaline. At the time it was legal, but its safety was dubious; unlike the prescription drugs you get from your doctor, it did not come in packets with printed instructions telling people how much to take.

Reports started coming in of fatalities associated with mephedrone, and tabloid journalists got interested. Someone coined the name meow-meow. The wildest story was that someone had ripped off their own scrotum after taking it. Where journalists are, politicians are never far behind, rightly or wrongly. The first fatalities associated with mephedrone were reported towards the end of 2008, and within two years it had been banned in the whole of the European Union, as well as the USA and many other countries.

We’ve moved from a plant-sourced stimulant that has been taken in some parts of the world for hundreds of years to a man-made stimulant that suddenly became flavour of the month and was taken by many thousands of people who had no clear idea of its safety. The case for better scientific literacy seems unanswerable.

Birmingham University’s Simon Cotton there, with the mind altering chemistry of cathinone.

Next week, a compound processed for more industrial purposes…

Alumina is produced from bauxite, the main aluminium ore, which is a mixture of different hydroxide minerals. The mineral is crushed and milled, treated with base, heated and filtered before the alumina is produced by heating to around a thousand degrees Celsius.

One of the waste products from this process – named after its inventor Carl Bayer – is the infamous ‘red mud’ that caused an environmental disaster in October 2010, when a million cubic metres of it were released in Hungary. The red mud itself contains iron oxides (hence the colour) as well as oxides of silicon, titanium and other metals. The main problem with the mud is its strongly alkaline nature, ranging from pH 10 to 13, and it was this that did the damage in the Hungarian spill.

Mud spills aside, discover the more beneficial consequences of alumina production by joining Neil Withers in next week’s Chemistry in its Element.

Until then, thank you for listening. I’m Meera Senthilingam.