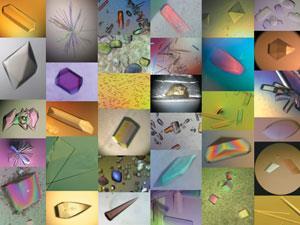 The International Union of Crystallographers (IUCr) has announced details of the activities planned to mark the International Year of Crystallography in 2014, ahead of the year’s official launch at UNESCO in Paris, France on 20–21 January. The packed schedule includes crystal-themed events all over the world aimed at scientists, students and members of the public.

2014 was chosen as the year to celebrate crystallography as it is close to the anniversaries of two major landmarks in the field’s history. Just over a hundred years ago, father-and-son team William Henry and William Lawrence Bragg first showed that diffracted x-rays can be used to map the positions of atoms within a crystal and determine its three-dimensional structure. It is also around 400 years since one of the earliest studies of crystal structures: astronomer Johannes Kepler’s observations of ice crystals in snowflakes.

‘Today there is literally no branch of physics, chemistry, biology, medicine, mineralogy, and structural and materials sciences that are untouched by crystallography,’ said IUCr president Gautam Desiraju in a statement. ‘The benefits to mankind have been enormous and range from the discovery of medicines and drugs, to materials that make the quality of life better for all.’ But he added that very few non-scientists are aware of the discipline or its importance. This is something the year-long celebration aims to put right. Activities to increase public awareness, such as travelling exhibitions, will take place throughout 2014, as will educational initiatives such as a worldwide crystal growing competition for schools.

Another core aim of the international year is to advance crystallography as an academic field, particularly in countries that do not have a large crystallographic community. The IUCr hopes to achieve this through a global series of scientific meetings and summits, which will focus on building international links. They will also encourage collaboration through the OpenLab project, a network of crystallographic laboratories that will deliver workshops and hands-on training to researchers and students from neighbouring regions and countries.

‘There are activities planned in every part of the world,’ said crystallography lecturer and IUCr project manager Michele Zema, speaking at a press conference. ‘All the projects we are going to implement in 2014 are just the seed for new activities. The year will be a starting point for new research centres, for new interest in youngsters and for crystallography to be shared and accessible for everybody.’