A fire rages out of control, lighting up the night sky above a shipping yard in the Chinese port city of Tianjin. Suddenly, an explosion shakes the ground and gouts of fire race upwards, chasing a mushroom cloud of dense smoke. It is already a disastrous conflagration, but there is more to come. Just 16 seconds later, another explosion creates a vast fireball that dwarfs the residential towerblocks nearby, raining thousands of flaming gobbets across the district. It takes several more seconds for the immense force of the blast to reach the eyewitness videoing the horrific scene. The denouement comes after another 30 seconds, as a third, even larger explosion pummels the eyewitness’s apartment and sends him fleeing for his life.

The Tianjin disaster on 12 August killed at least 160 people, injured more than 700 and destroyed buildings and cars for kilometres around. It is already clear that Rui Hai International Logistics, which owned the chemical storage warehouses responsible for the inferno, had grossly violated safety regulations; and that corruption involving Rui Hai employees and local officials had enabled those violations to go unpunished. 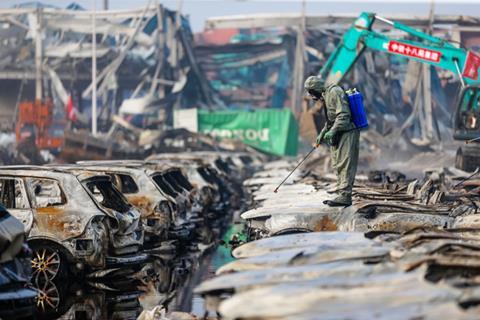 Tianjin starkly illustrates that such corruption, a widespread blight in China, can have deadly consequences. But chemical safety in China is not just a problem for the Chinese to deal with. It damages the reputation of the global chemical industry as a whole, and raises difficult questions for western companies that deal with Chinese chemical suppliers, and for anyone who buys products that rely on those chemicals.

Rui Hai’s 11-acre shipping yard contained about 700 tonnes of sodium cyanide, some 70 times more than it was authorised to store. It also housed 1300 tonnes of ammonium nitrate and potassium nitrate, along with 500 tonnes of magnesium and stocks of sodium metal, calcium carbide and more. This tinderbox was less than a kilometre away from a railway station and an apartment complex, far closer than regulations allow. And a lack of information about the chemicals stored there meant that firefighters were ill-prepared to tackle the blaze – they may have actually worsened the situation by dousing the site with water. Officials had apparently turned a blind eye to these transgressions. (It is probably no coincidence that one of Rui Hai’s founders is the son of the port’s security chief).

This is far from an isolated incident. At least three more major chemical explosions have occurred in China since Tianjin, according to media reports. And endemic corruption underlies countless examples of such regulatory failure: just think of the widespread contamination of milk products with melamine, for example, which sickened tens of thousands of babies. As Neal Langerman, a safety consultant at Advanced Chemical Safety in San Diego, California, told me: ‘Tianjin is a symptom of a systemic failure of China’s government to develop a culture that includes safety.’

The problem is not that China’s chemical safety laws are inadequate. Indeed, the state has been busily adopting regulations on manufacture and handling that are modeled on those used in the US and the EU. But these rules are often not enforced by China’s chemical industry, particularly at the plant development and planning stages.

Ultimately, it falls to China’s government to tackle corruption and clean up its chemical industry. But the global chemical industry, as well as chemists and educators in China, have a responsibility to help.

China’s chemical industry must undergo a major culture change, and that could take a generation. So whether they study in Beijing or Boston, the Chinese students who will become the leaders of tomorrow’s industry must be trained to see process safety as a core part of their jobs, and to understand the dreadful consequences of flouting safety protocols.

And although Rui Hai is a logistics company, it is undoubtedly part of the international chemical industry. The American Chemistry Council (ACC), the trade body of the US chemical industry, states in its Responsible Care Product Safety Code that its members have a responsibility to ensure safety throughout the value chain, from manufacture and shipping to disposal. These companies could help to improve adherence to regulations in China by exerting economic pressure, refusing to trade with Chinese firms that do not have a verifiable safety record.

Most multinational chemical manufacturers also have bases in China that adhere to the same standards that EU or US regulators demand. In principle, these companies already provide an object lesson in how to run a safe operation, and they directly influence safety culture by properly training and monitoring Chinese employees. But managers at these facilities could do more to reach out to their counterparts in Chinese firms, offering assistance to help ensure their compliance with regulations. That needs a top-down push from chief executives to empower managers to begin having those conversations.

The ACC, along with other professional and trade bodies, could help that process by actively encouraging their members to share best practice and restate their safety expectations of commercial partners in China. One way to achieve that is through forums such as the Institution of Chemical Engineers’ Safety Centre, which opened in 2014 in Melbourne, Australia, and brings together chemical companies to pool their expertise and collaborate on solving safety problems.

The benefits of globalisation and international trade must go hand in hand with these shared responsibilities. When it comes to chemical safety, we’re all in this together.