I often compare a working chemical plant to a particularly busy restaurant. The chemists plan the dishes and develop the recipes, and the operators are out in the plant, cooking up the product. The customers are hungrily waiting for their compounds to be shipped to them, asking the waiters (the salespeople) how their orders are coming, and whether or not their products have been tested in the quality control laboratory. 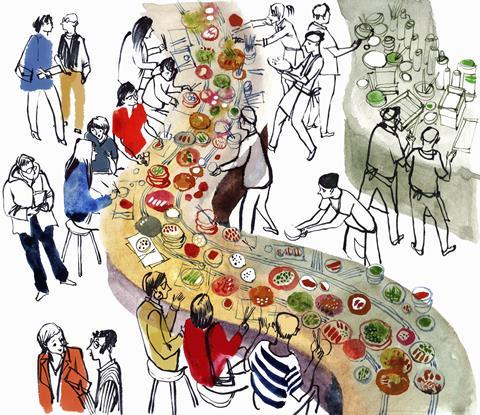 A chemical plant is a bit like a busy restaurant, and both will hit problems if something goes wrong with the clean-up

But there are still other details to consider. Where can we get the ingredients? What quality will those ingredients be? And the grimiest detail of all – at the end of a busy shift, someone has to clean out the pots and pans.

That’s one of those not very fun tasks that process chemists eventually find themselves thinking about – what’s the best way to clean a reactor easily, when there might be gummed-up residues on the sides, or some leftover product in the pipework? While there might occasionally be times where an operator needs to get suited up and carefully lowered into the reactor to gently scrape off compound that is stuck on the ceramic walls, it’s generally safer and easier to use solvents.

What is the best cleanout solvent? Ideally something that is inexpensive, non-flammable and capable of dissolving most or all of the reagents or reactants being used in the process. Perhaps acetonitrile is a perfect solvent for all your chemicals residues, but the plant manager is going to look askance at you requesting to use 1000 litres of an expensive and hard to obtain solvent just for cleaning. Water is a great cleanout solvent, providing you don’t have many water-insoluble chemicals in your reactor, of course.

There are also reactivity concerns to be aware of with cleanout solvents. In a now-famous case, a Roche plant producing the anti-HIV drug nelfinavir began having problems with tablets with a foul odour. They were contaminated with ethyl mesylate, formed when residual cleanout ethanol was left in a reactor that was used to store methanesulfonic acid. While the stinky tablets must have been an annoyance, the contaminated nelfinavir had a much larger problem – ethyl mesylate is genotoxic.

What makes a chemical genotoxic? In short, it is the ability to damage DNA. Ethyl mesylate can directly alkylate DNA bases. Unsurprisingly, the methylating agent dimethyl sulfate is also genotoxic. If a compound tests positive in the widely used Ames bacterial mutagenicity assay, it can be labeled genotoxic and drive much closer scrutiny. Exposure to such compounds via pharmaceuticals is limited by regulations. In the US, the Food and Drug Administration threshold is a level that would produce a maximum of one additional case of cancer per 100,000 patients if they were to be exposed over their lifetimes.

For most drugs, such prolonged exposure is unlikely. But when it comes to treating chronic conditions it becomes a much greater concern. The most recent example of genotoxic impurities in pharmaceuticals involves the sartan family of drugs for high blood pressure. Vast amounts of these drugs have been recalled because small quantities of the genotoxic compound N-nitrosodimethylamine (NDMA) have been detected. How did this compound get in there? The affected sartans all contain tetrazole rings, and 3 of the nitrogens are supplied by sodium azide. After the reaction, sodium nitrite is used to destroy any of the remaining toxic sodium azide. But if there’s dimethylamine about (for example as an impurity from the dimethylformamide solvent), it can react with nitrous acid (formed from sodium nitrite in acidic conditions) to form NDMA. Nitrosamines have since been detected in other drugs, including heartburn medicine ranitidine, and European regulators have instructed companies to investigate their full range of products for potential contamination.

Surely none of the chemists involved in producing these drugs woke up one day and thought ‘Today, I shall cause my company huge financial headaches and put thousands of people at greater risk of cancer.’ Instead, I suspect that there was the simple thought that so many of us had before: this change I am making to gain some desirable result (higher yields, simpler chemistry or lower costs) is harmless. The change may be innocuous, but it is important for us to prove this to ourselves. Rather than assuming that genotoxic impurities could not possibly have formed, it is important to investigate our processes and carefully determine the fate of troubling impurities. There are so many aspects of chemistry to consider, and when our products are being consumed by millions of people daily, those details become crucial.