Medicinal chemists need to overcome their fear of fuzzy proteins

Organic chemists bring their own perspective to drug discovery, and to biology in general. We’re used to relatively small molecules – they’re easy to make and study, and we know their structures very well indeed. We collect all sorts of spectral data on them, and we can tell you (for example) their expected peak in a mass spectrometer to four decimal places. Biomolecules, by contrast, can seem huge and fuzzy to us. The smallest proteins and oligonucleotides are still relatively gigantic, and the biggest ones are basically incomprehensible in the atom-by-atom way that we prefer. 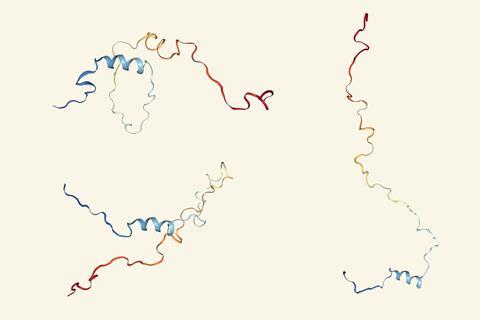 Proteins that have highly mobile structures, but still perform critical functions, can give medicinal chemists headaches

But the medicinal chemist (a hardy organic chemist subspecies) deals with this problem by concentrating on binding sites, which are both more structured and of a mentally more manageable size. Small molecules tend to fit into them as well, and if you have a good idea of that ligand–binding site structure as a whole, you can do some very useful work. All’s well with the world. But what about the proteins that don’t seem to have much of a structure at all? They exist; in fact, there are quite a lot of them. Even thinking about them gives a structurally-minded chemist a nervous, sinking feeling.

The problem is, these things can’t be ignored, as comforting an option as that might be. Intrinsically disordered proteins are too important – they show up disproportionately at the centers of large signaling networks in cells and in key roles in transcriptional complexes. They’re also found frequently in the transient phase-separated droplets inside cells, the ‘biomolecular condensates’ whose puzzling behaviour is looking more and more crucial to many processes (response to cellular stress, protein housekeeping, transcription etc.) So we’re going to have to learn to deal with these things.

Fortunately, some of them (while still weird) turn out to be friendlier than they appear. Those are the shape-shifting proteins that are disordered when by themselves, but take on perfectly reasonable structures in the company of their binding partners. It’s unnerving to see them appear in so many different guises and functions so easily, but at least each of these are real structures that can be studied (all the way up to the point of x-ray crystallography, in some cases). But the really unnerving ones seem to function while remaining disordered, and it’s here that the sinking feeling returns, along with accrued interest, late fees, and penalties.

There are, for example, proteins with long disordered tails that apparently function exactly the same after that whole region has had its amino acid sequence scrambled. Try to square that behavior with a defined structure! Even harder to deal with are the whole fuzzy complexes of proteins that appear to be in constant flux but still manage to stick together and do their jobs. With these, the idea of any orderly compound-binding pocket or surface just doesn’t seem to apply. Part of the chemist’s dread of these things is the fear that small molecules will turn out to be irrelevant to any attempts to deal with them.

But beyond that practical worry is a philosophical one. Structure has long seemed to be the only way to understand what’s really going on inside a living cell. Despite all the complexity and kinetic variety, we always expect the story to come down to structured molecules in defined spatial arrangements. The real story, though, may have been different all along. It’s difficult to even come up with a good mental picture of how those fuzzy complexes work, and for most organic chemists, mental pictures are how we do our thinking. I will confess that I’m still working on this problem myself, in the hope that a good working analogy will come to me, but so far all I’m getting are odd visions of somehow-functional clumps of mobile cotton wool or the like. And those images, as you can well imagine, are not doing me much good.

There is, of course, no requirement that the reality of cell biology be comprehensible in such terms – or any terms, to be really frank. But nihilism is a last resort, and certainly no way forward. Surely we can come up with something that will make the picture a bit clearer?