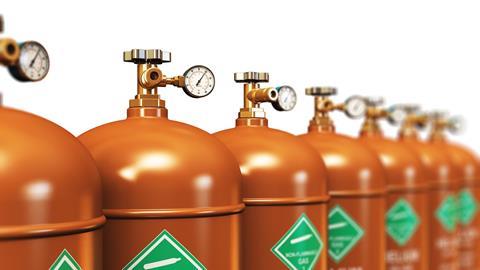 With US reserves running out, alternative sources of He are required

A small, mostly unnoticed event took place in 2006–7, and again in 2013: helium users in Europe and the US received letters from suppliers that they would be unable to meet any increase in demand for that year.

Both disruptions were serious events. There are many different industrial uses of helium gas, from specialist atmospheres in the semiconductor industry; to purge and pressurisation of liquid oxygen or hydrogen rocket propulsion systems; to specialist welding and the lift-gas in blimps. Of special note, there is not yet any replacement for the unique physical properties that allow liquid helium to maintain the ultra-cold temperatures enabling the superconducting magnets at the core of medical MRI scanners or particle accelerators.

It is therefore no surprise that the small ripples of concern first generated in 2006 grew when repeated in 2013, and resulted in a major report last year from the combined American Physical Society, Materials Research Society and American Chemical Society.1 So how concerned should we be?

Commercial helium supplies today are only produced from a handful of natural gas fields worldwide (until recently, mostly in the US). As with any limited source there is opportunity for single points of failure in the supply chain, and the problems with helium supply have been further complicated by the US government. As early as 1925, the US Helium Act identified the gas as a war material and ordered the creation of a strategic reserve. Later, helium use in the space race and missile programme gave rise to the 1960 Helium Amendment Act, paying for helium separation and storage in a federal facility at Bush Dome near Amarillo. In 1996, the Clinton administration ordered the Bureau of Land Management to sell off this reserve. Although disruption to the market price was intended to be minimal, with so few sources and suppliers this destablised the price of helium – providing little incentive for future discovery or investment while the Federal Helium Reserve supplies up to 40% of the world market.

Yet by the early 2020s the federal supply will be depleted. In the US, the Hugoton–Panhandle gas field is largely depleted and the lifetime of the LaBarge field is uncertain. Elsewhere, major helium supplies from Algeria and Qatar are only viable while liquefied natural gas has a global market; helium is at marginal concentrations in these fields and only viable because the methane liquefaction process enriches helium in the residual waste gas to levels worth separating. Smaller resources in Australia, Poland and Canada cannot replace these major supply sources, but there are reports that helium from Russian gas fields will provide a significant resource in the near future. This provides a very interesting political question – to what extent do we want to rely on Russian helium and the stability of the hydrocarbon market?

There are several initiatives to mitigate this bleak picture. The first is helium conservation. The helium user community have already made significant advances in recycling helium and preventing loss during use, driven both by the rising cost of helium and recognition that good stewardship of non-renewable resources is essential for a sustainable future. The second is the development of smaller and more efficient helium extraction processes; lower capital expenditure makes helium extraction from smaller helium-bearing gas fields viable and is already having an impact in the US markets.

The third is to find new helium gas fields.To do so, you need a helium source rock; a process to release the helium; understanding of the fluid processes that control its migration underground; and identification of geological trapping structures to capture it and concentrate the helium to levels that are worth producing.

One such major exploration programme is underway in Tanzania. Here, 2.7 billion-year-old cratonic rocks have accumulated helium produced by U and Th decay. The East African Rift Valley has split this continental craton, resulting in volcanic activity and associated heating, which mobilises the accumulated helium and other gases like nitrogen. Rock faults and hydrogeology influence how the gas migrates, resulting in ‘helium seeps’ bubbling out of the ground containing up to 10% by volume helium (around 0.3% makes separation commercially viable). It is estimated than one ‘helium province’ in Tanzania may have the potential to supply global need for up to a decade.

By understanding the basic processes controlling helium accumulations, we can look at other places that had similar geological characteristics in the past and widen our search for helium in the future: it is there waiting to be found.

However, we must not forget finding helium and building the infrastructure to separate and transport it to market requires significant time and investment. How much risk are we prepared to accept before we build this into our supply?