Hundreds of helium compounds could be hiding in Earth’s mantle

Although it doesn’t form any bonds, the noble gas can form compounds with salts at high pressure 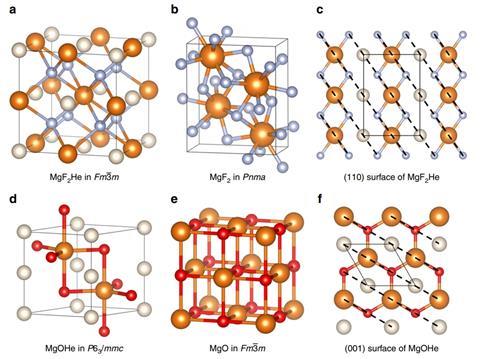 Far more helium compounds may be possible then ever imagined and rather than being made in a lab they could be deep within the Earth (Mg, O and F atoms are shown as white orange, red, and blue spheres)

Overturning conventional wisdom about the periodic table’s most unreactive element, US chemists have found that helium can form compounds with many salts – at the right pressures. This means there could be many more helium compounds than previously thought stored in Earth’s lower mantle, 700km below the surface.

In a surprise 2017 discovery, Artem Oganov from the Skolkovo Institute of Science and Technology in Russia and his colleagues found that helium forms a stable compound with sodium. ‘But even we thought at the time that [our compound was] an exception,’ admits Oganov, who wasn’t involved in the new study.

Now, Eva Zurek from University at Buffalo, Mao-sheng Miao from California State University Northridge and colleagues have discovered helium can react with salts that have an uneven number of anions and cations, like magnesium fluoride, MgF2. While magnesium fluoride is expected to only be stable at pressures equivalent to those at the Earth’s centre – 300GPa – calcium fluoride might react with the noble gas at pressures as low as 30GPa. This is despite the fact that helium doesn’t actually form any chemical bonds.

Puzzled by the fact that helium didn’t seem to form bonds in Oganov’s sodium compound, Miao and Zurek started to investigate what holds the structure together. Using quantum chemical calculations carried out by Zhen Liu, a postdoc in Miao’s group, the team realised that helium takes on a peacekeeper role: it reduces interactions between ions of the same charge. ‘If you have AB2 types of compounds, you can imagine that the anions are not so happy because they have more anion neighbours that repel each other,’ Miao explains ‘This becomes more severe when you put pressure on it. If you put helium in there you relieve this situation.’ This is also true for Na2He, in which electron pairs play the part of the anions.

‘I think this finding has a lot of importance,’ says Oganov. Scientists might even have to reconsider their models of our planet’s makeup, he adds. ‘A lot of the models relating to the formation of the Earth are based on the assumption that noble gases are inert and, therefore, completely degassed from the planet’s interior.’

Although the second most abundant element in the universe, helium is rare on Earth. Being light and unreactive, the gas simply escapes into space – the reason for the planet’s helium shortage. But ‘it’s definitely possible that helium is stored in compounds in the mantle that we don’t know about,’ says Zurek.

Zurek and Miao now plan to seek experimental verification of their calculations, as well as finding out if helium reacts with polarised covalent compounds like silicon dioxide. The team is also excited about the possibility of making porous materials or silicon allotropes by first inserting and then removing helium. ‘This is really a wild thought but I think our work is opening a wide door for possible applications,’ Miao says.