Hopes and fears for remdesivir

The positive preliminary results from a trial of Gilead’s antiviral remdesivir, run by the US National Institute of Allergy and Infectious Diseases (NIAID), offer a glimmer of hope during the Covid-19 pandemic. Remdesivir appears to reduce the time patients with Covid-19 require hospitalisation, and possibly reduces the death rate, although there is still reasonable uncertainty around both of these effects. If they are real, the drug will likely go some way to reducing the burden on healthcare systems as patients are discharged more quickly. In the context of a global crisis, the subsequent Emergency Use Authorisation for remdesivir issued by the US Food and Drug Administration (FDA) makes sense. But we must be extremely cautious with our optimism about these results. 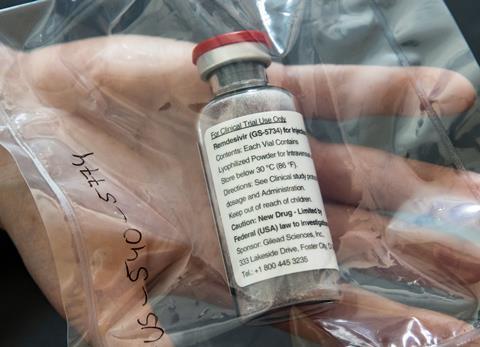 The balance between providing sufficient backing to get promising treatments to patients, and jumping on desperate bandwagons is tricky

As NIAID director Anthony Fauci noted, it’s not a cure. Nowhere near. It’s also worth bearing in mind that, while the NIAID trial was randomised, double-blind and placebo-controlled, its primary measure of success (reducing recovery time) was changed after the trial began – the original endpoint was a more complex measure of disease severity. That alone is not a reason to discount the results, but it needs to be considered. Furthermore, there are several contradictory trials that failed to show any effect, although most of these also have problems with their statistical power – for example a Chinese study that failed to recruit sufficient patients once the country began to get its outbreak under control.

All of this is reasonably consistent with remdesivir having a relatively small effect on the virus, if anything. If it does have a definite effect, then its greatest value is likely as a toehold in the ascent to better treatments. A starting point to build from. More data as the drug’s use expands under the emergency measures provided in the US, and potentially elsewhere if regulators in other territories follow the FDA’s lead, should clarify exactly how big an effect the drug has. The European Medicines Agency has begun a rolling review of remdesivir, and allows its ‘compassionate use’ in extreme cases.

As we try to navigate the dead ends and detours of overcoming this virus, it is important to keep in mind how new data are presented to those with influence. Political backing will be key to releasing the resources necessary to clarify how effective new treatments are, but there is always the risk that this can backfire, as we saw with chloroquine and hydroxychloroquine. The science pointed to their chances of being effective being very slim, with relatively high risk of side-effects (as has since been reinforced in trials). But high-profile backing from US president Donald Trump, and others, led to significant effort being diverted towards them. Centres running multiple trials for different Covid-19 treatments found patients flocking to their chloroquine studies, with fewer signing up to studies of other, perhaps more promising, candidates.

We all desperately want to see something, anything, that reduces the severity of the disease. But as Derek Lowe outlines in his latest column, the best answer we can currently give to questions of whether a drug works or not is … ‘maybe?’ So we need to resist the urge to get caught up in hype, and push back against the politicians and media commentators who do. Otherwise we risk exhausting our resources by jumping from bandwagon to bandwagon in the coming months.