Late stage functionalisation can seem supernaturally powerful, says Derek Lowe – if you’ve got the nerve to try it

The synthesis of a new organic molecule can be approached in several ways. You can start with some chunk of the structure (whatever’s available) and just keep adding things on, or perhaps taking a few off, until you get to the structure you want. Or you can break the problem down into two (or more) smaller intermediates and combine them near the end. The ‘building’ or ‘joining’ methods can both be effective, depending on the molecules involved.

One problem, though, is that in either case some intermediate of interest may well have to be cajoled into a state where it will react in the proper way. Protecting groups on reactive oxygen and nitrogen groups are a classic example – you tie them up until it’s time to unmask them for their turn on stage. It’s not an elegant way to solve the problem, since these groups have to be specifically added to the structure and taken off again, but it often works. 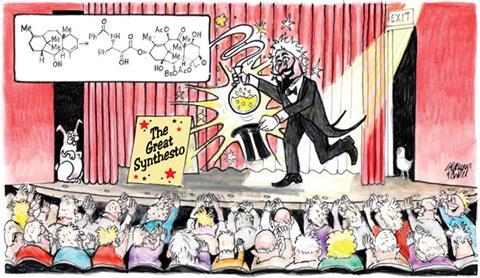 In recent years, there’s been more attention paid to protecting-group-free synthesis. That can require a good deal more work at the beginning, because you may well have to tune up your reaction conditions quite a bit to make sure only the desired transformations happen. But when it works, it’s like a magic trick, and other organic chemists (well aware of all the things that could have gone wrong) are usually impressed. They’re imagining the ugly mixture they would have produced had they tried something similar!

This is the sort of chemistry that we aspire to: reaching in and changing individual bonds and atoms at will

A subset of this sort of chemistry is getting a lot of attention, particularly from drug discovery labs. It’s the hunt for reactions that can be applied to larger, more complicated molecules. They’re the sorts of transformations (halogenation, hydroxylation) that you’d usually expect to see earlier in a synthetic scheme, when the molecules are simpler, and watching them at work on a large substrate with several functional groups looks like a magic trick as well. Many of these reactions mimic enzymatic processes, such as the cytochrome p450 oxidation that happens during drug metabolism (enzymes, after all, are famous for their selectivity).

Such reactions have an obvious appeal in drug discovery, materials science or any area where many different variations of a common framework are needed. That push for structural diversity makes the selectivity problem less crucial – if you have a reagent system that can reliably monohydroxylate all sorts of substrates, you may not care as much about picking the place where it does its work. Odds are that the product will be a new compound, or one that would have been harder to make by conventional means, and is thus worth looking at.

If you have a library of 10,000 compounds to test, you could (theoretically) use a late-stage fluorination or hydroxylation to convert it into another 10,000 compounds with rather different properties. And if the reaction really does mimic enzymatic selectivity (in the case of oxidation), then so much the better: you may have ‘pre-metabolised’ your compound and made an analogue that you would surely have wanted to make and test anyway. Alternatively, you may have fluorinated it in the just the spots that you would have wanted to batten down.

Some of these reactions borrow explicitly from known enzyme catalytic mechanisms, while others are coming over from metal-catalysed couplings or photochemistry. The first requirement for success is realising that it’s even possible to do these complex-substrate reactions without protecting groups. There may be more of these reactions than we realise, because no one has quite had the nerve to try them yet.

These ideas not only get us into new chemical space, but they also point the way to doing the sort of chemistry that organic chemists have always aspired to: reaching in and changing individual bonds and atoms at will. Enzymes manage it, in all sorts of impressive ways, so we know it’s possible (at least in some cases). Putting away the masking tape and dustsheets so we can work directly on the molecules of interest will be good practice.