Making a meme of it

Shared cultural knowledge can be both boon and bondage

A popular pie chart has been shared around the internet for the past couple of years, with the title ‘what I learned in organic chemistry’. Several small chunks of the pie are marked Iupac nomenclature, named reactions, poisons, functional groups and the like, depending on the version you see. At least three quarters of the chart is, of course, labelled ‘how to draw hexagons’. 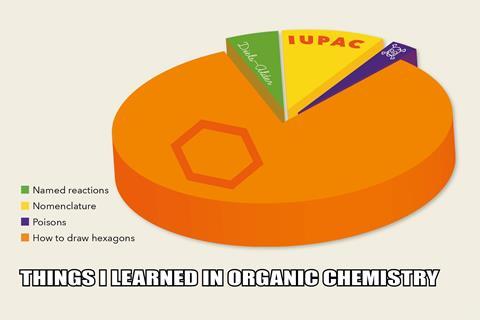 Those of us who consider ourselves citizens of the internet will be familiar with amusing themed images known as memes pervading our lives. However, the term predates the web, introduced in 1976 by controversial biologist Richard Dawkins. That said, Dawkins’s neologism was itself predated by the synonymous German word ‘Mneme’, coined by evolutionary biologist Richard Semon in 1904. In his book The Selfish Gene, Dawkins used the term meme to describe a ‘unit of cultural transmission, or a unit of imitation’. At its essence, a cultural leitmotif that recurs and evolves through society over time, sometimes randomly evolving. As well as annotated images popularly shared over social media, a meme could refer to a religious idea, a style of architecture, or even the idea that you should change your underwear on a daily basis.

Likewise, memes proliferate in the laboratory. Every experimental chemist has a slew of skills and techniques that aren’t found in textbooks. They had to be learned from the people around them, and they advance through the generations. Although guides on how to pack a column or pull a thin-layer chromatography spotter from a glass Pasteur pipette can probably be found in some textbook somewhere, I suspect most of us learned those skills from our labmates. Another example is recrystallisation – most chemists pick their favourites of the various techniques, usually introduced to them by a mentor. As Dawkinsian memes, these techniques evolve slowly over time, improving the speed and quality of everyday research tasks. It’s thanks to this that a trained synthetic chemist can get up to speed on a completely different project in a new laboratory with only a couple of weeks’ slowdown while they find out where everything is.

Every chemist has skills that aren’t found in textbooks. They had to be learned from the people around them

Chemistry memes, in a looser sense, also tend to occur in the form of sayings. Some proverbs – ‘a tidy laboratory means a lazy chemist’ – persist for hundreds of years after their attributed speaker, in this case Jöns Jacob Berzelius. I can’t bring myself to agree with Berzelius on this one, so perhaps Paracelsus’s wise words ‘the dose makes the poison’ may be a more apt example. Likewise, we have all heard a chemist state a perhaps ruder version of ‘garbage in, garbage out’, or cheekily advise a colleague ‘don’t start a column after 5pm on a Friday’. Or 4pm, 3pm or noon, depending on the chemist.

Whether we agree with it or not, the way we publish organic chemistry is inescapably full of memes too. Individual sections of papers tend to be written in a similar way, evolving very slowly over the decades. We use words in papers that would never appear in our everyday conversation – ‘gratifyingly’, anyone? But the actual research content is just as much a victim of our indoctrination into the global chemistry culture. Even after we’ve finished sighing over the latest series of ‘methyl, ethyl, propyl, futile’ substrate variations, those tables are full of compounds only included because other people do it too. There’s usually a steroid in there, to show that the method is compatible with complex substrates – why? Was that method ever likely to have an effect on strong C–C and C–H bonds? Unless it’s a bona fide C–H activation paper, the answer is usually no.

As with any area of culture, memes can be positive (mentors passing on valuable lab skills), but also negative. The cultural status quo can encourage whole fields to become stuck in groupthink. I’d be interested to see artificial enhancement of lab culture working alongside natural selection. This could be from encouraging participation of scientists with diverse research and demographic backgrounds in the lab, as well as consciously committing to escape the groupthink and dream up out-of-the-box ideas. As well as being proud of the healthy parts of our chemistry lab culture, we should strive to continually do better!