Only boring elements get bored

Prizes for best, most boring and most overlooked element up for grabs 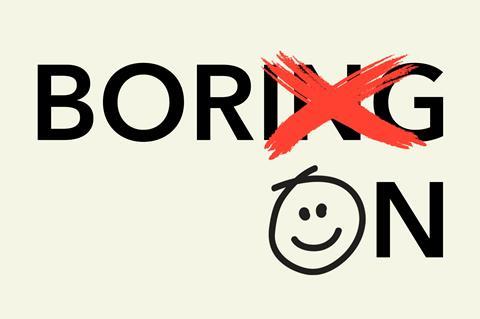 I imagine most Chemistry World readers have a favourite element (mine is boron), but what about the other end of the preference scale? Which element leaves you cold? Which elicits no more than an apathetic shrug? To put it bluntly: which is the most boring element?

In an opinion piece for the journal Nature Chemistry, Rebecca Jelley from the University of Auckland and Allan Blackman from Auckland University of Technology set themselves the task of answering that very question. They metaphorically held each element (with an atomic number less than 92) in turn and asked whether it sparks joy or is ‘no more than a placeholder on the periodic table’. The victor, they predict, will lack applications, associations with Nobel prizes or Oscars, and extremes of reactivity and abundance. (Spoiler: none of the elements ends up in a bin-bag bound for the charity shop.) In the end, they decide that protactinium is a bit less interesting than the other main candidates – thulium, scandium, praseodymium, hafnium and strontium – but they stop short of bestowing the title of most boring. They say that every element has the capacity to be someone’s favourite.

Here at Chemistry World we’ve just finished a competition on Twitter, asking our followers to vote for their favourite elements from a shortlist compiled by our team. Our final four consisted of hydrogen, oxygen, fluorine and platinum. And it turns out that chemists can’t resist an element that reacts with nearly all the other elements, is the third most abundant in the universe, and has an isotope with a magic number of protons and neutrons. Or maybe they just like to breathe?

It’s time for the grand final of our #IYPT2019 #BattleOfElements vote!

Four elements enter, only one can win.

Our friends over at Physics World ran their own version of the contest and so oxygen will now go on to face the physicists’ eventual favourite: carbon. (I was surprised that hydrogen didn’t even feature in the Physics World competition. After all, the theoretical physicist Victor Weisskopf said ‘to understand hydrogen is to understand all of physics’. But what do I know?)

So the battle for champion of champions is set to be a p-block derby. But whichever element wins, it will be a victory for chemistry. I anticipate the physicists will wheel out carbon’s quirky quantum mechanics – that I can accept. But if they say that graphene is the most fascinating 2D material they’ve got a fight on because it’s obviously boron nitride.

You might be wondering what became of boron, which I backed in round one of our Twitter competition. Well, it came dead last behind fluorine, phosphorus and platinum. To say I was disappointed is an understatement. What it did do was confirm boron’s title as the most overlooked element on the periodic table. And that’s enough to make it my favourite.