UK-based researchers have found a family of organoborane catalysts that can perform nucleophilic fluorination reactions. While chemists are well-accustomed to the high fluorophilicity of organoboranes, looking more closely into the different degrees by which they exhibit that characteristic affinity reveals that some of them could serve as fluoride phase-transfer catalysts.

Fluorine-containing compounds are prevalent in pharmaceutical and agrochemical industries, which have an exigent need for cheaper and safer fluoride sources. In a perfect world, simple fluoride salts, such as KF and CsF, could perform nucleophilic fluorination reactions. ‘Using a fluoride as a nucleophile is very difficult because of its high basicity and low solubility,’ says Miriam O’Duill, an expert in catalysis from the University of Nottingham in the UK, who was not involved in the research. As a result, the field of fluoride phase-transfer catalysis emerged where catalysts take fluoride from the salt into the solution in a way that sees the fluoride solvated but not pacified.

‘We were just trying to explore a different set of molecules that might be able to do this phase transfer,’ explains Michael Ingleson from the University of Edinburgh, UK, who led the work, when the team found that organoboranes were largely overlooked in the field of fluoride phase-transfer catalysis. ‘So the fundamental question was can we use them and what controls their efficacy?’ says Ingleson. Chemists’ perception of organoboranes is that they react with fluorides to form very stable B–F bonds, so the team considered how they could trigger organoboranes to pick up a fluoride and then easily release it between two phases. 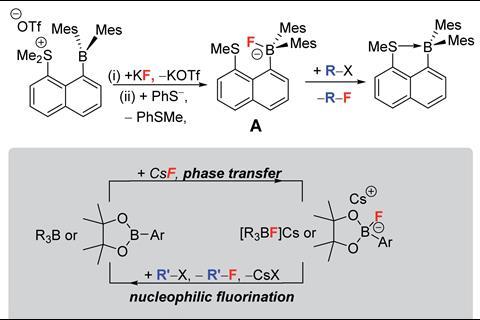 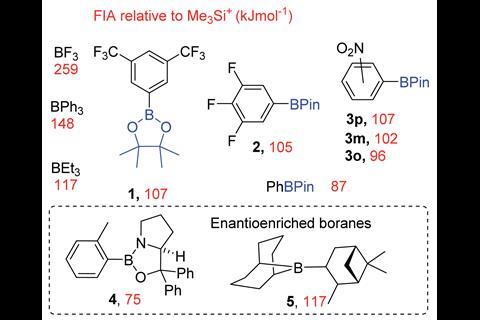 Based on calculated fluoride ion affinity, Ingleson and his team built a library of organoboranes that exhibit good potential for phase-transfer catalysis. ‘The background studies were so incredibly thorough that having this measure of fluoride affinity gives the end user a really nice idea of what would work or not, so it is a really nice Goldilocks balance,’ comments O’Duill. The efficiency of these organoboranes as catalysts is impacted by the strength of the B–F bond, which is dependent on the Lewis acidity of the borane toward the fluoride. ‘You need a borane that is reactive enough to take the metal fluoride from solid into the solution… but then [the] boron reagent can’t be too reactive otherwise it will stick to that fluoride and never release it,’ explains Ingleson.

In this work, the team was able to demonstrate, for the first time, that a class of organoboranes could act as fluoride phase-transfer catalysts for the fluorination of organohalides, using CsF as the fluoride source, in excellent yields. ‘The fact that this study uses commercially available reagents to do that makes it a very user-friendly methodology,’ comments O’Duill. The team took the work a step further by uncovering that chiral induction of up to 30% enantiomeric excess could be achieved with commercially available chiral oxazaborolidines to make enantioenriched β-fluoroamines. Even though the reaction was achieved with modest enantioselectivities, the study lays the groundwork for further development. ‘This is a proof of principle study demonstrating that this class [of compounds] that haven’t been explored at all for this application should be explored,’ says Ingleson. ‘There is massive tunability in [the fluorophilicity of organoboranes],’ he adds.

‘This study elegantly and carefully outlines the balancing effects, which are relevant to the use of boranes as phase transfer catalysts for fluorination reactions,’ comments Alastair Lennox, an expert in synthetic electrochemistry at the University of Bristol, UK. ‘The investigation lays the necessary foundations for their further development into practical and enabling catalyst systems.’