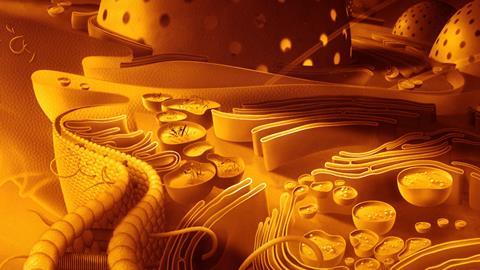 Opening up a cellular black box

Anyone who really knows anything about cell biology will freely admit that we don’t know very much about cell biology. The latest realisation in this line has been developing over the last few years: it seems that there is a complete system of organising cellular contents and processes that we hadn’t really caught on to.

These are the ‘membraneless organelles’ or ‘biomolecular condensates’ (to pick two of the more popular terms), and they are literally droplets of phase-separated material that appear and disappear inside living cells. They had been seen by microscopy for decades, and the more obvious types had picked up various names – mostly variations on vague terms such as ‘speckles’, ‘granules’, ‘bodies’ and the like. But what’s been dawning on everyone is that these are actually separate liquid phases that appear and disappear under specific conditions and seem to have well-defined compositions and functions. They seem to be balanced close to various sorts of thermodynamic tipping points, to judge from how quickly they can form or disappear.

Their interiors include proteins that tend to have large unfolded regions, or proteins that match up an excess of positively-charged residues with partners that have excess negatively-charged ones. And there are generally plenty of RNA species around, with their phosphate groups contributing to the liquid phase properties as well. My own mental image of these things is that they’re probably rather like the ionic liquids that were all over the chemical literature a few years ago. That matches up with reports that some of them produce surprisingly polar liquid phases in model systems. I had never thought of proteins and nucleic acids as making up such mixtures, but then I’ve known for a long time that, by cellular standards, I lack imagination.

Why do such things even exist? Condensates provide a weirdly high concentration of some enzymes and reaction partners, while excluding many other potential diluting species. It’s a way to drastically change rate constants and specificities in some particular region for some particular period. Transcription of DNA into messenger RNA, for example, now seems to be a condensate-driven process. Tiny drops of enzyme complexes cling to the DNA strands like dewdrops on a spiderweb, and dissipate on some sort of cue (perhaps by changes in phosphorylation state?) It looks like we’re all going to have to adjust our ideas about how things work in cellular interiors, and honestly, those were confused enough before this new information came along.

My first thought when I saw these things was to wonder how different small molecules might partition into them (or alternatively, be excluded from them). As an organic chemist, when I see two liquid phases that separate so neatly, I am willing to wager any sum available on the idea that there must be compounds with differential solubility between them. In fact, a report last year1 suggests that various cancer drug molecules do seem to concentrate in some types of condensate droplets. We will surely find more such examples. Some cases of compounds that work much better or worse than expected in cellular assays may well be due to their ability (or lack thereof) to end up in the right intracellular droplets.

But then, we drug discovery types have always had a blind spot at that level. It might come as a surprise, but we’ve never had really useful general methods to track what happens to our compounds once they enter cells. Once in a while we can pin them down and prove that they’re piling up in the nucleus or the lysosomal compartment or what have you, but for the most part, it’s a black box. Actually, it’s a whole amorphous pile of black boxes and black bags connected by black tubing. So perhaps the need to study condensate behavior will push that field forward as well. Imaging technology, mass spectra, new labeling and staining techniques - we’ll take anything we can get, and we’re going to need all of it. Things are smaller, more varied, and change more quickly down there than we’d realised!