Synthetic biology is bursting with life

Synthetic biology can be hard to pin down. The field encompasses a vast array of research themes, from creating artificial life to engineering microbes to produce medicines or fuels.

Through it all, though, runs a rich seam of chemistry. Strolling around the international synthetic biology meeting SynBio 6.0 in July, I saw molecules wherever I looked. Organic structures littered the boards at poster sessions. Reaction pathways mapped out biosynthetic routes to natural products, and even ferrocene made a surprise appearance, replacing the deoxyribose in DNA to produce a strange organometallic hybrid. 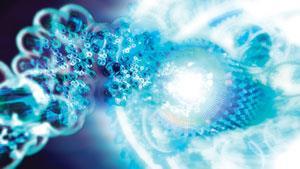 The event, held at Imperial College London, also offered ample evidence that the UK is positioning itself firmly at the field’s forefront. UK science minister David Willetts made an appearance to announce that Imperial will soon host SynbiCITE, an innovation and knowledge centre backed by £24 million from government and industry, which will develop commercial applications for synthetic biology. This follows the UK chancellor, George Osborne, saying last year that synthetic biology is one of eight key technologies that can expect greater investment, as part of a broader research strategy aimed at boosting the stuttering economy. The UK’s Department for Business, Innovation and Skills reckons that the global market for synthetic biology products will top £7 billion by 2016.1

The trend is clear: last year, a survey ranked the UK second (behind the US) in terms of research publications in synthetic biology.2 ‘The Americans were off the starting blocks faster than us, by about five years, but we’re catching up really quickly now,’ says Richard Kitney, co-director of the Centre for Synthetic Biology and Innovation at Imperial, who will head up SynbiCITE with his colleague Paul Freemont.

With substantial funding commitments, research strength and political backing, the time is ripe for chemists to contribute to this burgeoning research area.

Chemists are already using synthetic biology approaches to probe the origins of life. By developing alternative polymers to carry the genetic code, known as xeno nucleic acids, or building artificial cells, they are exploring the chemistries that could have created the first metabolic networks. And there are plenty of other avenues for chemists to pursue.

For example, chemists can develop the tools required – they already invented the fast, accurate DNA synthesis and sequencing techniques that really kick-started the field. Tom Ellis, a synthetic biologist at Imperial, tells me that a simple method to register whether a gene is turned on or off would be high on his wish-list. One current approach involves inserting an additional gene that makes green fluorescent protein (GFP) whenever a neighbouring gene activates. But the host organism may not tolerate the GFP gene, or it may be adversely affected by the additional metabolic strain of synthesising GFP. Chemistry could provide an alternative signal that is less invasive, Ellis suggests.

Then there’s turning microbes into miniature chemical plants, which has already scored some high-profile successes. Sanofi is using engineered yeast to make artemisinin, essential to the most effective malaria treatments. Other microbes turn simple sugars into biofuels such as fatty esters and butanol – some even use cheaper, more sustainable feedstocks such as cellulose or carbon dioxide. And biotech companies are using synthetic biology to tailor microbes that manufacture high-value chemicals. Amyris, for example, is supplying Michelin with isoprene for its car tyres, while Solazyme is making cosmetics ingredients using engineered algae. ‘A lot of biology is being reengineered to do chemistry,’ says Ellis.

But a metabolic pathway that works in a plant cannot be neatly transplanted into a bacterium, and completely novel routes are even more troublesome. Here, chemists can offer fundamental insights into the effects of kinetics, redox potentials, cell pH and a host of other factors on a reaction’s success in its new host. Also, persuading a bacterium to make a few drops of a chemical in the lab is a far cry from producing it in commercial quantities. ‘The big challenge is taking them to scale,’ says Ellis. That often demands the skills of a chemical engineer, who understands how scale-up changes the behaviour of a reaction, and knows how to measure that reliably.

Ellis is particularly keen to see chemists involved in the foundational aspects of the field. One of the key goals of synthetic biology is to create libraries of biological ‘parts’ – standardised genetic units that can be connected to make biological devices – that should be as reliable and easy to assemble as components on a computer chip. Chemists could develop the methods to link these genes together consistently and predictably, says Ellis.

SynBio 6.0 showed that synthetic biology is at an exciting stage in its development – and that the chemical sciences will be crucial to its success.