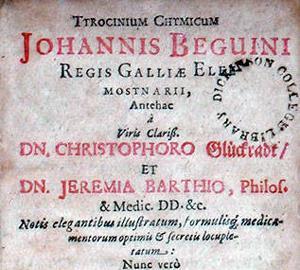 It’s at the heart of the first chemical equation, and makes Hayley Birch think of quiche. This week’s compound is antimony sulfide

This week, Hayley Birch fires up our imagination to appreciate the chemistry and chemical equations of antimony sulfide. 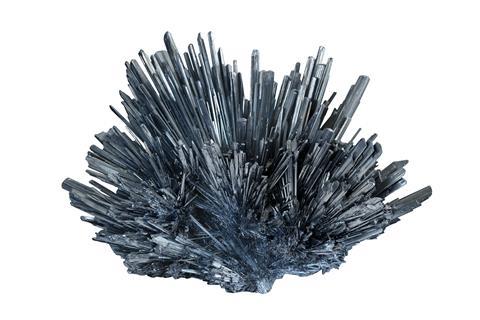 We begin with what some might consider to be the very first chemical equation in the very first chemistry textbook. The equation can be found on page 168 of an edition of Tyrocinium Chymicum, or ’Beginner’s Chemistry’, published 400 years ago in 1615. A copy of this rare book was somehow obtained by Glasgow University chemist, John Ferguson, an avid collector who by the time of his death in 1916 had amassed hundreds of old manuscripts, including many relating to alchemy and chemistry, as well as witchcraft.

The author of Tyrocinium Chymicum, Jean Beguin, displayed the reaction slightly differently, however, placing antimony sulfide at the centre of a kind of spider diagram with the various constituents of the reaction at the ends of the four legs. He refers to some of the constituents in strange terms, but scholars seem to agree that he had understood the general principles of the reaction correctly. 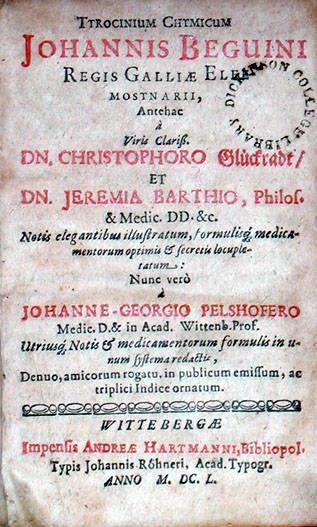 In early editions of the book, he referred to mercury chloride and antimony sulfide mysteriously as ’the two dragons.’ Beguin often disguised the chemicals he used in his experiments to avoid ’casting very precious pearls before unworthy swine’ – in other words, giving away his secrets. It appears Beguin was cagey about his work because he felt that certain students of the pharmacy school he had set up were not grateful enough for the wisdom they received from him. As far as Beguin was concerned, he was making cutting-edge treatments for all the world’s ills. The antimony sulfide reaction was part of a scheme for making a powder ’of a singular use in all pestilential affects, and malignant fevers.’

The only reason Beguin wrote the textbook in the first place was to bypass the tedium of dictating to his students. He never intended it to be for general reading. However, a copy of the manuscript quickly found its way into the hands of pirates and he soon found himself correcting and revising the pirated copies, before finally conceding to publish an expanded edition under his own name.

His chemical reaction is regarded as extraordinary because, at that time, substances were not really thought of as compounds that were made by combining chemical elements. There was little reason to believe that the components in the reaction that Beguin outlined would remain constant or could be incorporated into new compounds. It wasn’t until decades later that Robert Boyle published his Sceptical Chymist, proposing the idea of atoms and elements, and dispensing with Aristotle’s earth, wind, fire and water.

In any case, when we picture Beguin heating his antimony sulfide with mercury chloride or revising his precious manuscripts, we can use some artistic licence and imagine the scent of freshly baked quiche floating in through the open window of his laboratory. Beguin, it transpires, was born in Lothringen or Lorraine, a northeastern region of France that is home to the delicious egg and cream tarts, thought to date back to the 16th century. Whilst Beguin eventually left for Paris to set up his pharmacy school, he would undoubtedly have come across ’quiche Lorraine’ during his youth, back when it was simple fare made with bread dough instead of pastry. And who’s to say he didn’t take the recipe with him?

So when you next cross paths with a quiche Lorraine, think of Beguin grudgingly sketching out his equation for all those ’unworthy swines’ and placing antimony sulfide at its centre.

Science writer Hayley Birch, with the chemistry of antimony sulfide. Now here are some clues about next week’s compound.

Any idea? Find out for sure in next week’s Chemistry in its Element. Until then, thank you for listening, I‘m Meera Senthilingam.