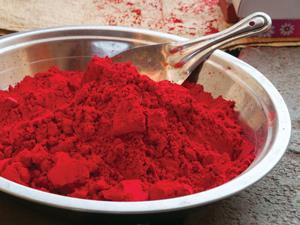 Raychelle Burks introduces a red dye with a prickly history

Anger, love, lust, power, sacrifice – the colour red has symbolized them all. The story of one particular red dye has all of these elements and more. This dye’s history is a prickly tale – and not just because it involves prickly pear cacti. 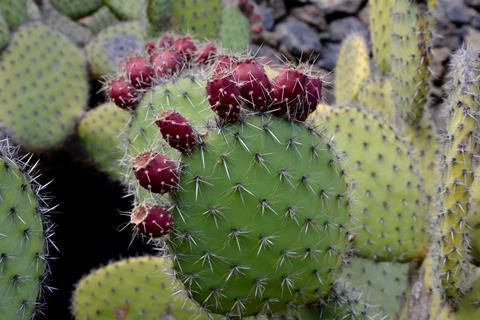 A red dye we now know as cochineal, carminic acid, or carmine.

This dye was first utilized and mass produced by the Aztec empire, where the dye was known as ‘nochezli’, translated as ‘blood of the prickly pear.’

Within the Aztec empire, nocheztli wasn’t just a textile dye. It was used to paint the body, colour foods, and was added to medicinal preparations. Nocheztli production was a big business – one that depended on hundreds of species of prickly pear cacti. But these cacti aren’t the source of the dye, they’re the host to the dye’s source – Dactylopius coccus, also known as the cochineal insect.  It’s the females that spend their lives on cacti leaves and it’s the female cochineals that are packed full of red dye.

Crushed, dried insects can be used as powdered dye. A lot of dried insects. It’s been estimated that 70,000 female cochineals are needed to produce 1lb of carminic acid dye.

With the blood of the prickly pear, red is not our only option. Carminic acid is pH dependent and we can tune the colour of a dye bath by adjusted the pH. For a more orange red, we’ll need to lower the pH. If we want wine red to violet, we’ll need increase the pH.

What if we want to lock-in carminc acid’s red colour, making a dye much less sensitive to pH? Chelation is the answer. Carminic acid forms complexes with aluminium and calcium to produce carmine.

The chelate carmine is red over a much wider pH range and gives a more intense red than carminic acid. Carmine is not soluble in acidic solutions, but is soluble in alkaline solutions.

Both carminic acid and carmine are permitted to be used to colour foodstuffs in North America and Europe, with concentration limits in the parts-per-million range.

Back in 2012, in the US, some Starbucks customers were not happy to learn bugs were being used to dye their Strawberries & Cream Frappuccino, the Strawberry Banana Smoothie and the Red Velvet Whoopie Pie. Many of these customers were vegetarians or vegans, so the insects were not welcome in their diets.

Starbucks wasn’t hiding their use of “cochineal extract”. The US Food and Drug Administration (FDA) had required listing cochineal extract and carmine in food and cosmetics labels for a few years by the time Starbucks “bug dye” hit the news. 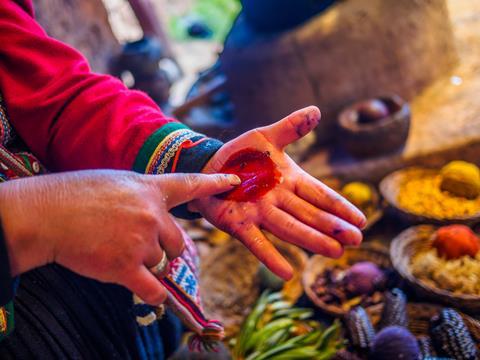 Prior to this FDA rule, cochineal extract and carmine were lumped in with other ‘natural’ colouring agents and didn’t have to be specifically listed. The FDA labeling rule change didn’t happen because of vegetarianism or veganism – it was reports of severe allergic reactions to ‘…cochineal extract-containing food and carmine containing food and cosmetics…’. By specifying these dyes, the FDA sought to aid allergy suffers.

It seems Starbucks listing ‘cochineal extract’ for some frapps and snacks caught the attention of thisdishisvegetarian.com, which made it known to its readers that ‘cochineal extract’ wasn’t vegan. The ‘bug dye’ angle got a lot of media attention, a petition was started, and soon Starbucks dropped what some would call an ‘all natural’ dye for something different, but just as red. For frapps, Starbucks went with tomato’s lycopene.

Though cochineal extract is out at Starbucks, carminic acid and carmine are still very popular. Next time you have an ingredient list handy, check to see if the red you’re seeing is the ‘blood of the prickly pear.’ Unless knowing will bug you, of course.

Science writer Raychelle Burks, painting the town – or your food – red, with the chemistry of carminic acid. Next week, a classic children’s toy is brought back to life.

…in the case of the silly putty a viscoelastic substance that would, with time, flow like a very sticky liquid, but that became an elastic solid under pressure, so that you could bounce it like a ball.

Brian Clegg reveals the compound behind the variable chemistry of silly putty in next week’s Chemistry in its Element. Until then, thank you for listening, I’m Meera Senthilingam.