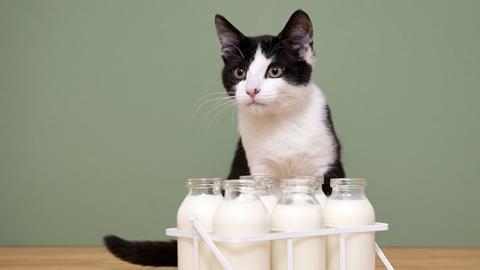 One of the most popular plastics of the early 20th century was accidentally invented by a cat, as Kat Arney finds out.

Sometimes it’s hard to determine exactly who should take the credit for a scientific discovery – but it’s rare that the credit actually goes to a researcher’s pet. Here’s Kat Arney…

There are a lot of things you can do with milk: pour it in tea or on cereal, whip it into a milkshake, ferment it into yoghurt or cheese, and much more. But did you know you can also turn milk into plastic? That’s thanks to casein – the main protein found in milk (or, more accurately, a family of related proteins) – responsible for giving the white stuff its colour and named after the Latin word for cheese, caseus.

The non-edible uses of casein date back to the ancient Egyptians, who used it as a fixative in paints used for creating murals, and also in glue. But its application in solid plastics didn’t really start until the end of the 19th century, when an enterprising German printer, Wilhelm Krische, started searching for wipe-clean alternatives to the slate tablets used by schoolchildren – paper being too expensive to waste on kids at the time. At the same time, Bavarian chemist Adolf Spitteler was experimenting with using formaldehyde to turn milk into a solid material, which could be cut or carved into all sorts of shapes.

The real credit for the discovery, however, should go to Spitteler’s cat. The story goes that the cat knocked over a bottle of formaldehyde in the lab one night, which dripped into the hapless animal’s dish of milk. In the morning, Spitteler discovered that the formaldehyde had curdled the milk into a solid, horn-like material, which set him off on a train of research and development. Once their method was perfected, Krische and Spitteler set up the first company to make casein plastic on an industrial scale – Vereinigte Gummiware Fabriken – and filed a patent for their new milk-based material in 1899. It was quickly taken up by manufacturing firms across Europe eager for new plastics to play with.

Sometimes described as ‘the most beautiful of plastics’, buttons, buckles, knitting needles, jewellery, pens, pots and much, much more were quickly crafted from solid casein. For the fashion-conscious, it could be easily dyed into a rainbow of different colours, including exotic tortoiseshell or horn-effect patterns. Although there were many different brand names for casein-based plastics – my personal favourites being Lactoid, Aladdinite, and Galalith (Greek for ‘milk stone’) – the chemistry underlying their production is broadly the same. And it’s the same as for the production of any polymer-based plastic: joining together smaller monomer subunits (in this case individual casein protein molecules) into longer polymer chains.

First, the milk is skimmed to remove fat, then either treated with acid or with an enzyme called rennet. This causes the casein proteins to polymerise and precipitate into a solid mass, which is then separated out, washed and dried. Further treatment with alkali turns these casein clumps into water-soluble caseinates, making a dough-like paste that can be turned into rods or sheets with the application of heat and pressure. To prevent the plastic dissolving again in contact with water, these then need ‘curing’ in formaldehyde solution for up to a year. This means that casein plastics can’t be moulded in the same way as many other oil-based polymers, but the rods and sheets can be cut and carved into all kinds of shapes. 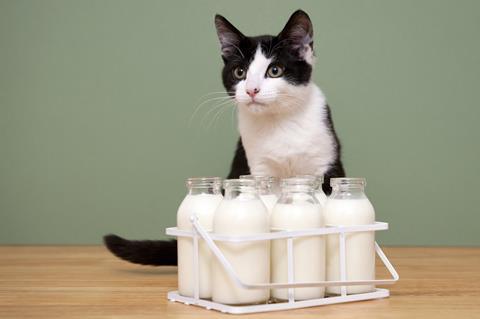 Casein plastics enjoyed their heyday in the 1920s and 30s, particularly for buttons, as they could withstand the heat of an iron much better than other materials around at the time. But the rise of new, easier-to-manufacture materials after the second world war, such as polyester resins, meant that the button fell out of the market, so to speak. Today, casein is still used in glues and coatings, particularly for paper and card, and also has more arty applications in paints and photography emulsions. Anke Domaske, a fashion designer from Hanover in Germany – casein’s spiritual home – has even developed a technique for making a silky casein-based fabric from powdered milk, known as QMilch. But because it’s non-toxic, casein is most widely used in the food industry, in coffee creamers or as fillers in pharmaceutical tablets. Casein is also used to thicken liquids or provide extra texture, and to boost the protein content of foods. And if you think that processed cheese slices feel a bit plastic-y, that’s down to casein too - although I think personally I’d rather eat my casein in the form of a nice lump of mature cheddar.

Kat Arney there with the unlikely discovery of one of the most popular plastics of the early 20th century. Brian Clegg will be with us next week to continue the dairy theme…

Human young don’t produce chymosin, using different enzymes to attack milk proteins, but that doesn’t mean that we don’t find it useful. The action within ruminants’ stomachs is exactly the same process that is required to produce the curds that eventually become cheese.

Join Brian next week. Until then, let us know if there are any compounds you would like us to cover – tweet @chemistryworld or email chemistryworld@rsc.org. I’m Ben Valsler, thanks for listening.