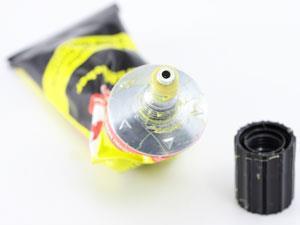 This week, prepare to get sticky with Emma Stoye…

Superglue is a handy addition to any DIY enthusiast’s toolkit – it certainly proved useful when I was a kid. I remember once accidentally breaking one of my mum’s favourite china figurines.  I expected a severe telling off for this, but to my relief my dad was able to fix it in five minutes with superglue and replace it on a high shelf, good as new. It’s still in my parents’ house, and to this day I have no idea whether my mum ever realised it had been broken.

The secret to superglue’s stickiness is cyanoacrylate, a type of plastic known as an acrylic resin. It exists in the tube as single molecules in liquid form. But when they come into contact with water, the molecules react with hydroxide ions to form long polymer chains that set into a hard solid. As there is a thin layer of moisture covering most surfaces, cyanoacrylate can bond them together very effectively.

But broken ornaments were the last thing on American chemist Harry Coover’s mind when he first synthesised cyanoacrylate during the second world war. He was working at the Eastman Kodak laboratories in New York trying to develop new plastics to make moulds for use in gun manufacture. He stumbled across a substance that – rather annoyingly – stuck to just about everything it touched. This was not what he was after, and it ruined several bits of expensive equipment, so he shelved the formulation and thought no more of it. About six years later he and his colleagues revived their experiments on cyanoacrylate while looking at heat-resistant polymers for use in aircraft manufacturing – and noticed that it could form incredibly strong bonds without heat or pressure. 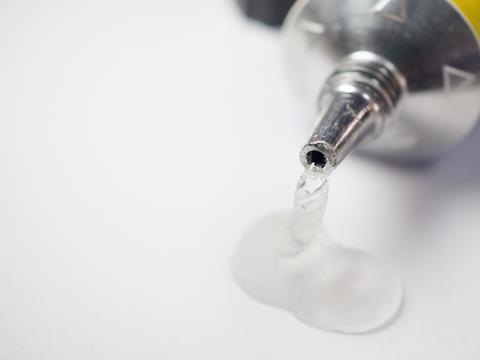 They soon realised the huge commercial value of such adhesive properties, and coined the term ‘superglue’ when they patented the discovery. In 1958 the first versions hit shelves – Coover was keen to promote its applications, and even showed off its sticking power on the TV show I’ve Got a Secret, where he lifted the presenter, Garry Moore, off the ground using two metal blocks connected by a tiny blob of superglue.

As it is activated by water, cyanoacrylate is great at sticking to slightly moist surfaces, including skin. Not long after its invention, medics began to think it might be useful for surgery and wound healing. And during the Vietnam War a cyanoacrylate glue, applied using a spray can, was used to rapidly close up soldiers’ wounds, which prevented many cases fatal blood loss on the battlefield.

But don’t ever be tempted to reach for the superglue if you’ve cut yourself and can’t find a plaster – while drying, industrial grade cyanoacrylates release irritants including formaldehyde and acetic acid, which can cause fairly nasty skin burns. There is a safe alternative – octyl cyanoacrylate – which retains the strength and flexibility of superglue without its toxicity. It is sold under the brand name Dermabond, and has various medical applications, mainly as an alternative to stitches – to minimise visible scarring in facial surgery, for example, or when an athlete’s wounds need rapidly closing during a sporting event. It is sometimes used by rock climbers and guitar strummers to form a protective coating on their fingertips.

Cyanoacrylates have also found a role in the world of forensic science as one of the cheapest and easiest ways of lifting fingerprints off hard surfaces like glass or plastic. During ‘superglue fuming’ the fingerprint-containing object is exposed to ethyl cyanoacrylate vapour, either in a special chamber in the lab or via a portable fuming ‘wand’ at the crime scene. The vapour reacts with amino acids, fatty acids and protein residues from skin, leaving a sticky white deposit that clearly shows the fingerprint ridges, which can then be photographed or lifted off with tape. 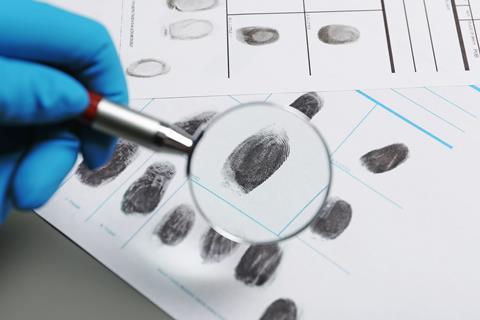 As cyanoacrylate glues can easily bind to skin, there have inevitably been many documented mishaps where people end up glued to themselves, each other, or objects. The manufacturers of superglue warn that it is easy to glue your index finger to your thumb when holding things together while the glue is drying. It is also easy to see how this could be exploited by pranksters. One fictional example that immediately springs to mind is chapter three of Roald Dahl’s Matilda, in which the resourceful six-year-old decides to punish her cruel father by supergluing his hat to his head. Chaos ensues, and after several unsuccessful, and painful, attempts to remove the hat, Mr Wormwood eventually resorts to scissors, losing a hefty chunk of hair in the process.

But cyanoacrylate glues aren’t impossible to unstick. What Matilda’s dad should have done is use a powerful organic solvent like acetone to soften the glue – a few splashes of nail varnish remover would’ve done the trick.

So it’s not invincible, but cyanoacrylate does have many talents – it can mend broken

And no doubt it’s come to your rescue on many occasions. That was Chemistry World’s Emma Stoye with the bonding chemistry of cyanoacrylate. Next week, we go back in time to the war…

On the 28th of July 1942 the UK War Cabinet met in, or probably under, Whitehall; and the brief minutes you can now download from The National Archives includes an alarming statement by the minister of agriculture Robert Hudson: ‘We haven’t enough in (the) country to last beyond Christmas.’

What did they not have enough of? Phosphates. These are a wide range of chemicals you make by subtracting one or more protons from this week’s compound, phosphoric acid, H3PO4, and they are especially important for producing fertilisers.

And discover just how phosphates are extracted from this compound, and just why they’re so crucial in fertilizing our land by joining Lars Öhrström in next week’s Chemistry in its Element. Until then, thank you for listening, I’m Meera Senthilingam.