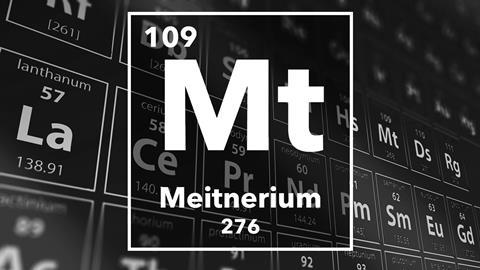 This week an element not found in nature, but that's created atom by atom. And named after a well respected scientist. Here's Nik Kaltsoyannis.

A flick through older chemistry textbooks, and even a quick look in some university chemistry lecture theatres, reveals a periodic table with only three rows of transition elements. These periodic tables typically stop at element 103 – lawrencium – which is the final element in the actinide, or 5f series. Toward the end of the 20th century, however, the extension of the periodic table beyond lawrencium, which had been well under way since the 1970s, was increasingly well recognised in the chemical community, and modern periodic tables feature a new row of elements situated in their rightful place at the foot of the transition metals. These transactinide, or 6d elements, begin with element 104, rutherfordium, which lives in group 4 under hafnium, and extend to element 112, very recently named copernicum, situated below mercury. meitnerium, the topic of this podcast, with the symbol Mt and atomic number 109, sits in the middle of this band in group 9 underneath cobalt, rhodium and iridium.

Meitnerium and the other transactinide elements do not exist in nature. They are all man-made and have been synthesised in only fantastically small quantities, by combining the atoms of two lighter elements. They are all highly radioactive, with very short half-lives, severely limiting the practical chemistry that can be performed on them. Indeed, entirely new experimental techniques, collectively known as "atom-at-a-time" methods, have been developed to study these elements. In these experiments we are not working with moles of atoms, or even recognisable fractions of moles, but literally with single atoms. 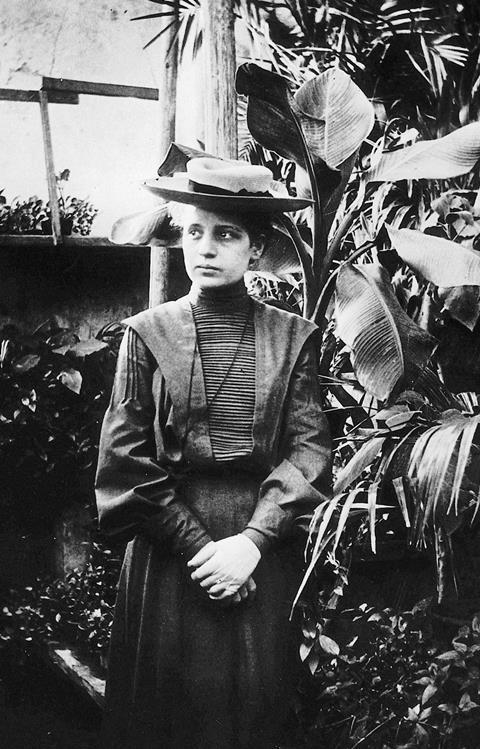 Meitnerium was named after the Austrian physicist Lise Meitner, born in Vienna in 1878. She managed, in very difficult circumstances, to graduate in physics with the equivalent of a PhD and in 1907 moved to the Kaiser Willhelm Institute in Berlin, to begin researching in the new field of radiochemistry. It was there that she met chemist Otto Hahn, with whom she had a long and productive scientific collaboration. In the 1930s, they worked together on irradiating uranium with neutrons, but before they were able to complete their studies the rise of Nazism forced Meitner, a Jew, to flee Germany in 1938. She moved to Stockholm and continued to communicate with Hahn frequently by letter. They were puzzled by the observation that barium was produced upon irradiation of uranium with neutrons, and it was not until Christmas of 1938 that Meitner, whilst walking with her nephew Otto Frisch, realised what was happening. The neutrons were causing the uranium nuclei to split, generating barium, an element with atoms a little over half the size of those of uranium. Meitner and Frisch predicted that krypton must be the other product of this fission reaction, and soon afterwards Frisch, upon returning to Copenhagen, verified this prediction.

Meitner spent the second world war in Sweden. It was an unhappy time for her, as there was little local interest in nuclear physics, and she clashed with her host, the Nobel prize winner Manne Siegbahn. She was horrified to learn of the atomic bomb attacks on Hiroshima and Nagasaki, the terrifying culmination of her discovery of nuclear fission. Shortly afterwards she received a different type of shock, when she heard that the 1944 Nobel prize for chemistry had been awarded solely to her long term collaborator Hahn. There is little doubt that her disagreements with host Siegbahn, together with her sex and religion, counted against her in the eyes of the committee. Although Hahn privately acknowledged her contribution by giving her half of the Nobel prize money, he refused to do so publicly, a further source of pain to her.

Recognition did eventually come to Meitner, including the 1946 US "Woman of the Year" award, and the prestigious Enrico Fermi award from the US atomic energy commission in 1966. She died in 1968, and is buried in Hampshire, for she spent her final years in England, to be near her nephew Frisch in Cambridge. In 1997 her scientific contributions were immortalised with the official adoption of the name meitnerium for element 109. 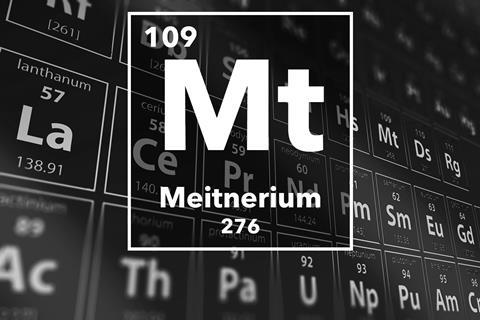 Periodic table of the elements – 109 – Meitnerium

Meitnerium was first discovered in 1982 in Darmstadt, in what was then West Germany. A single atom was made by bombarding a target of bismuth with accelerated nuclei of iron, to make the isotope meitnerium-266, which has 157 neutrons in its nucleus, together with the 109 protons which define the element. No chemical experiments have ever been performed on meitnerium, because a sufficiently stable isotope has yet to be made. Meitnerium-266 has a half-life of just 1.7 milliseconds, and even the most stable known isotope, meitnerium-276, has a half-life of less than 1 second. Theoretical predictions tell us that meitnerium-271, which could be produced by reaction of uranium with chlorine, or berkelium with magnesium, may well have a sufficiently long half-life so as to allow atom-at-a-time chemistry to be performed, but meitnerium-271 has yet to be made. There is little doubt, however, that given the skill and ingenuity of the atom-at-a-time scientists, meitnerium will gain a chemistry, and that these achievements will be a fitting tribute to the remarkable woman who's name the element bears.

And a much deserved tribute indeed. That was University College London's Nik Kaltsoyannis with the unstable chemistry of meitnerium. Now in contrast, next week we have an element with some very long lived isotopes.

samarium has several isotopes, four of which are stable and several of which are unstable. The half-lives of many of these are very short, on the order of a few seconds, but three – samarium-147, samarium-148 and samarium-149 – have extremely long half-lives. Samarium-147 has a staggeringly long half-life – 1.76 x 1011  years, or in real money, 106 billion years. Even by geological standards this gigantic figure is incomprehensible, especially if we remember that the earth itself is only a little under 14 billion years old.

And join science writer Richard Corfield to find out the uses of the long-lived isotopes of samarium as well as its shorter term ones in next week's Chemistry in its Element. Until then I'm Meera Senthilingam from thenakedscientist dot com, thanks for listening and goodbye.