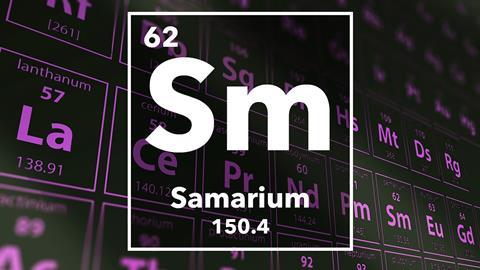 A rare, lustrous element whose isotopes have unfathomably long half-lives

This week, a rare, lustrous element with isotopes that have some unfathomably long half-lives. To tell us more, here's Richard Corfield:

samarium is a rare earth element that – indirectly – has the distinction of being the first naturally occurring chemical element to be named after a living person. Samarium was isolated from the mineral Samarskite which was discovered near the small town of Miass in the southern Ural mountains in 1847. The mineral was named by the German Mineralogist Heinrich Rose after Vasili Evgrafovich Samarsky-Bykhovets, Chief of Staff of the Russian Corps of Mining Engineers between 1845 and 1861 who had given Rose the ore sample to study. 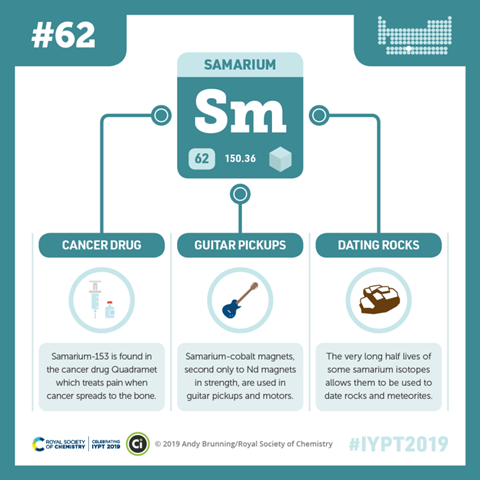 Although Samarium was discovered in 1853 by the Swiss chemist Jean Charles Galissard de Marignac – who first observed its sharp absorption lines in didymium – it was not until 1879 that it was isolated in Paris by the French chemist Paul Emile Lecoq de Boisbaudran using a sample from a newly located ore body in North Carolina.
Samarium is a rare earth metal with a pronounced silver lustre. It oxidizes in air and ignites spontaneously at 150 degrees centigrade. Rare earth metals are a collection of seventeen chemical elements which include scandium, yttrium and fifteen lanthanoids. The term 'rare earth' is simple a reflection of the fact that these elements were originally isolated from uncommonly occurring oxide-type minerals. Today rare earth metals are increasingly important in the manufacture of high-tech electronic devices. 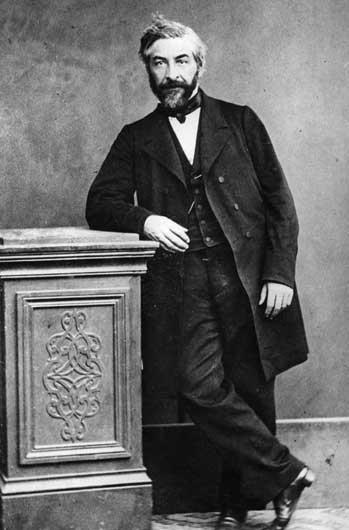 Samarium's geological origins in Samarskite is entirely in keeping with its importance to the science of geology. Samarium has several isotopes, four of which are stable and several of which are unstable. The half-lives of many of these are very short, on the order of a few seconds but three, 147Sm, 148Sm and 149Sm have extremely long half lives. It is 147Sm that is the key player in the sub-discipline of geology known as geochronology - the science of assigning absolute dates to minerals. 147Sm has a staggeringly long half life: 1.06x1011 years or, in real money, 106 billion years. Even by geological standards this gigantic figure is incomprehensible, especially if we remember that the Universe itself is only a little under fourteen billion years old. Thus one kg of 147Sm will decay to half a kilo of 147Sm in a period of time that is roughly eight times the duration of the Universe!

Given that the age of the Earth and the other planets of the solar system is only 4.5 billion years, why is this particular element and isotope so useful? Partly it is because the samarium to neodymium decay chain is highly resistant to metamorphosis, the geological process which transforms sedimentary and igneous rocks into other rock types by subjecting them to great heat or pressure or both. This has the effect of redistributing, or fractionating, the original elements. In the case of other geological chronometers, such as the uranium to lead or rubidium to strontium decay series this resets the decay chain clock, rendering them useless. Samarium to neodymium does not suffer from this disadvantage. 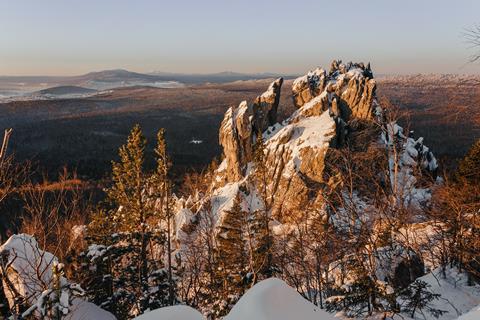 Samarium also has a long history in the nuclear industry. Soon after the Second World War the Indianapolis-based chemical giant Eli Lilley developed a fractional crystallisation technique for separating neodymium from ore. The synthesis of samarium and gadolinium was a by-product of the process and since 149Sm is a strong neutron absorber the product - called 'Lindsay Mix' – was sold as an early form of neutron damper for nuclear control rods. Even today samarium is still used as a neutron absorber in reactor control rods; particularly when mixed with  europium and gadolinium forming the so-called samarium-europium-gadolinium (SEG) concentrate.

Samarium has more modest uses as well. These include its use as a component in carbon arc lights in the movie industry, as well as for making magnets that have a high resistance to demagnetisation. Such samarium-based magnets are perfect for both headphones as well as electric guitar pickups. Recently developed samarium/cobalt (SmCo5) magnets have the highest resistance to demagnetisation of any material yet synthesised. Samarium oxide is also used in optical glass to absorb infrared radiation as well as to dope calcium fluoride crystals in optical lasers. 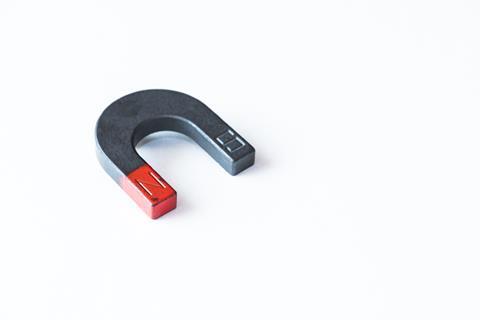 Samarium, like other rare earths is becoming progressively more valuable in a world whose dependence on high-technology is snow-balling. Recent reports have highlighted concerns that the Chinese are hoarding their native reserves of the rare earths to feed their electronic industries. This will certainly have the effect of hiking the price of samarium and the other rare earth elements so it may be time to consider buying share options. Not bad for an element first discovered in the mountains of tsarist Russia and which has - until now – been mostly noted for its arcane role in dating exotic rocks.

So get those samarium shares in ASAP. That was science writer Richard Corfield with the geological and technological uses of the element samarium. Now next week, we stick with the lanthanides and hear about an element that likes to play hard to get.

At that time, scientists were using improved techniques such as fractional crystallisation to obtain the individual lanthanides from mixtures. In 1886, Lecoq was the first person to identify dysprosium by separating its oxide from holmium oxide. It took him over 30 goes to do this, so he named the element accordingly, from the Greek word, dysprositos, meaning "hard to get at".

And Simon Cotton will be sharing some of the chemistry, properties and applications of dysprosium in next week's Chemistry in its element.  Until then, I'm Meera Senthilingham and thank you for listening.