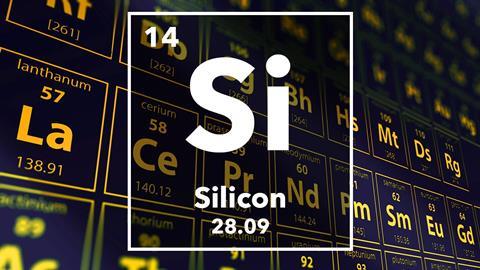 For this week's element we enter the world of science fiction to explore life in outer space. Here's Andrea Sella.

When I was about 12, my friends and I went through a phase of reading science fiction. There the were the fantastic worlds of Isaac Asimov, Larry Niven and Robert Heinlein, involving impossible adventures on mysterious planets – the successes of the Apollo space programme at the time only helped us suspend our disbelief. One of the themes I remember from these stories was the idea that alien life forms, often based around the element silicon, abounded elsewhere in the universe. Why silicon? Well, it is often said that elements close to each other in the periodic table share similar properties and so, seduced by the age-old red herring that 'carbon is the element of life', the writers selected the element below it, silicon.

I was reminded of these readings a couple of weeks ago when I went to see an exhibition of work by a couple of friends of mine. Called Stone Hole it consisted of stunning panoramic photographs taken at extremely high resolution inside sea caves in Cornwall. As we wandered through the gallery a thought occurred to me. 'Could one imagine a world without silicon?' Every single photograph was, not surprisingly, dominated by rocks based on silicon and it was a powerful reminder of the fact that silicon is the second most abundant element in the Earth's crust, beaten to first place by oxygen, the element with which it invariable entangled. 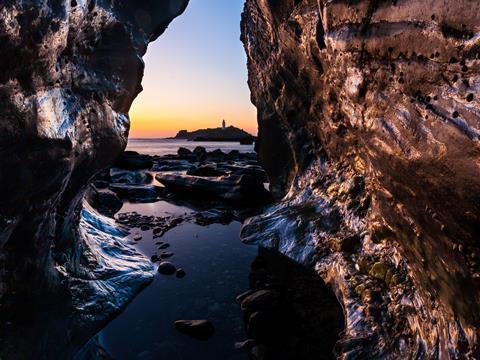 Silicate rocks – those in which silicon is surrounded tetrahedrally by four oxygen atoms – exist in an astonishing variety, the differences being determined by how the tetrahedra building blocks link together, and what other elements are present to complete the picture. When the tetrahedra link one to the next, one gets a mad tangle of chains looking like an enormous pot of spaghetti – the sorts of structures one gets in ordinary glass.

The purest of these chain-like materials is silicon dioxide – silica – found quite commonly in nature as the colourless mineral quartz or rock crystal. In good, crystalline quartz, the chains are arranged in beautiful helices and these can all spiral to the left. Or to the right. When this happens the crystals that result are exact mirror images of each other. But not superimposable – like left and right shoes. To a chemist, these crystals are chiral, a property once thought to be the exclusive property of the element carbon, and chirality, in turn, was imagined to be a fundamental feature of life itself. Yet here it is, in the cold, inorganic world of silicon. 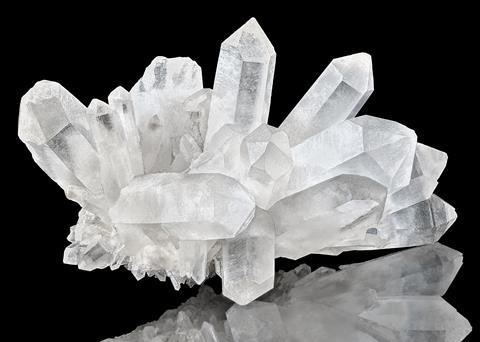 Most grandiose of all, one can make porous 3D structures – a bit like molecular honeycombs – particularly in the presence of other tetrahedral linkers based on aluminium. These spectacular materials are called the zeolites, or molecular sieves. By carefully tailoring the synthetic conditions, one can build material in which the pores and cavities have well defined sizes - now you have a material that can be used like a lobster traps, to catch molecules or ions of appropriate size. 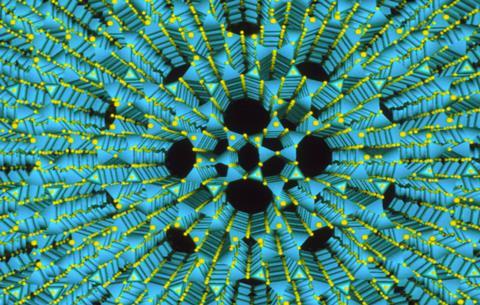 But what of the element itself? Freeing it from oxygen is tough, it hangs on like grim death and requires brutal conditions. It was Humphrey Davy, the Cornish chemist and showman, who first began to suspect that silica must be a compound, not an element. He applied electric currents to molten alkalis and salts and to his astonishment and delight, isolated some spectacularly reactive metals, including potassium. He now moved on to see what potassium could do. Passing potassium vapour over some silica he obtained a dark material that he could then burn and convert back to pure silica. Where he pushed, others followed. In France, Thénard and Gay-Lussac carried out similar experiments using silicon fluoride. Within a couple of years, the great Swedish analyst Jöns Jakob Berzelius had isolated a more substantial amount of the material and declared it an element. 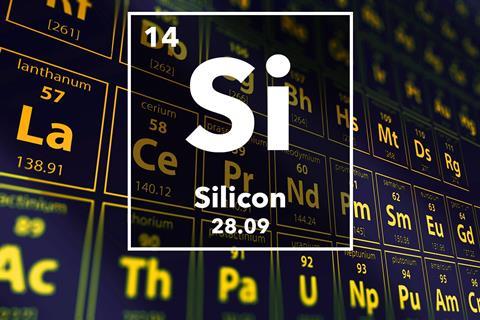 Silicon's properties are neither fish nor fowl. Dark gray in colour and with a very glossy glass-like sheen, it looks like a metal but is in fact quite a poor conductor of electricity, and there in many ways, lies the secret of its ultimate success. The problem is that electrons are trapped, a bit like pieces on a draughts board in which no spaces are free. What makes silicon, and other semiconductors, special is that it is possible to promote one of the electrons to an empty board – the conduction band – where they can move freely. It's a bit like the 3-dimensional chess played by the point-eared Dr Spock in Star Trek. Temperature is crucial. Warming a semiconductor, allows some electrons to leap, like salmon, up to the empty conduction band. And at the same time, the space left behind – known as a hole – can move too.

But there is another way to make silicon conduct electricity: it seems perverse, but by deliberately introducing impurities like boron or phosphorus one can subtly change the electrical behaviour of silicon. Such tricks lie at the heart of the functioning of the silicon chips that allow you to listen to this podcast. In less than 50 years silicon has gone from being an intriguing curiosity to being one of the fundamental elements in our lives.

But the question remains, is silicon's importance simply restricted to the mineral world? The prospects do not seem good – silicate fibres, like those in blue asbestos are just the right size to penetrate deep inside the lungs where they pierce and slash the inner lining of the lungs. And yet, because of its extraordinary structural variability, silicon chemistry has been harnessed by biological systems. Silicate shards lurk in the spines of nettles waiting to score the soft skin of the unwary hiker and inject minuscule amounts of irritant. And in almost unimaginable numbers delicate silicate structures are grown by the many tiny life-forms that lie at the base of marine food chains, the diatoms. 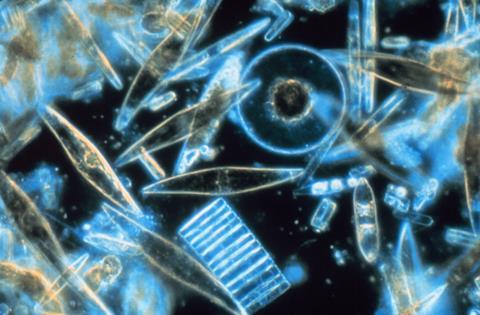 Assorted diatoms as seen through a microscope. These tiny phytoplankton, found living between crystals of annual sea ice in McMurdo Sound, Antarctica, are encased within a silicate cell wall

Could one therefore find silicon-based aliens somewhere in space? My hunch would probably be not. Certainly not as the element. It is far too reactive and one will always find it associated with oxygen. But even linked with oxygen, it seems unlikely, or at least not under the kinds of mild conditions that we find on earth. But then again, there is nothing like a surprise to make one think. As the geneticist J B S Haldane put it, 'The universe is not queerer than we suppose. It is queerer than we can suppose'. I live in hope.

So although unlikely there could be some silicon based surprises lurking out in space. That was the ever hopeful Andrea Sella from University College London with the life forming chemistry of silicon. Now next week we hear about roentgenium the element that we need to get just right.

The idea was to make the nickel ions penetrate the bismuth nucleus, so that the two nuclei would fuse together, making a bigger atom. The energy of the collision had to be carefully controlled, because if the nickel ions were not going fast enough, they could not overcome the repulsion between the two positive nuclei and would just fly off the bismuth on contact. However, if the nickel ions had too much energy, the resulting 'compound nucleus' would have so much excess energy that it could just undergo fission and fall apart. The trick was, like Goldilocks' porridge, to be 'just right', so that the fusion of the nuclei would occur, just.

And join Simon Cotton to find out how successful collisions were created by the founders of the element roentgenium in next week's Chemistry in its element. Until then I'm Meera Senthilingam and thank you for listening.