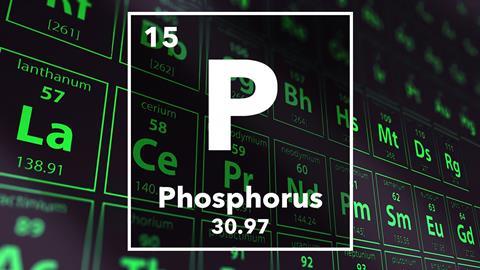 Nina Notman enlightens us on an element with many uses

Phosphorus is a non-metal that sits just below nitrogen in group 15 of the periodic table. This element exists in several forms, of which white and red are the best known.

White phosphorus is definitely the more exciting of the two. As it glows in the dark, is dangerously flammable in the air above 30 degrees, and is a deadly poison. Red phosphorus however has none of these fascinating properties. 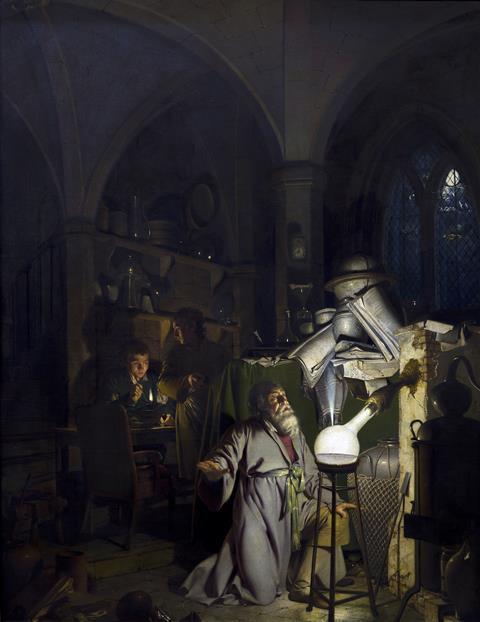 The Alchemist (full title: The alchymist, in search of the philosopher’s stone, discovers phosphorus, and prays for the successful conclusion of his operation, as was the custom of the ancient chymical astrologers), a 1771 painting by Joseph Wright of Derby, depicting Brandt discovering phosphorus.

So where did it all begin? Phosphorus was first made by Hennig Brandt in Hamburg in Germany in 1669. When he evaporated urine and heated the residue until it was red hot. Glowing phosphorus vapour came off and he condensed it under water. And for more than 100 years most phosphorus was made this way. This was until people realised that bone was a great source of phosphorus. Bone can be dissolved in sulfuric acid to form phosphoric acid, which is then heated with charcoal to form white phosphorus.

White phosphorus has found a range of rather nasty applications in warfare. It was used in the 20th century in tracer bullets, fire bombs, and smoke grenades. The scattering of phosphorus fire bombs over cities in World War II caused widespread death and destruction. In July 1943, Hamburg was subject to several air raids in which 25,000 phosphorus bombs were dropped over vast areas of the city. This is rather ironically considering where phosphorus was first made. 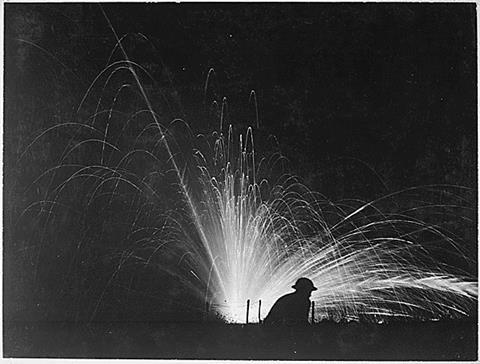 Another group of warfare agents based on phosphorus are nerve gases such as sarin. Sarin is a fluorinated phosphonate that was used by Iraq against Iran in the early to mid-1980s. And was also released in a Tokyo subway in 1995, killing 12 people and harming nearly a thousand others.

White phosphorus has also found a wide range of other uses. One of these was in phosphorus matches that were first sold in Stockton-on-Tees in the UK in 1827. This created a whole new industry of cheap lights – but at a terrible cost. Breathing in phosphorus vapour led to the industrial disease phossy jaw, which slowly ate away the jaw bone. This condition particularly afflicted the girls who made phosphorus matches. So these were eventually banned in the early 1900s and were replaced by modern matches which use either phosphorus sulfide or red phosphorus. 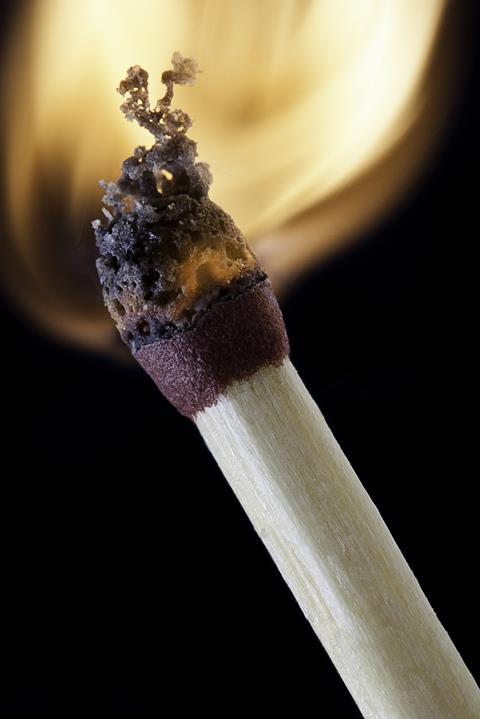 As well as in matches, today phosphorus has found other uses in lighting. Magnesium phosphide is the basis of self-igniting warning flares used at sea. When it reacts with water it forms the spontaneously flammable gas, diphosphine which triggers the lighting of the flare.

Super pure phosphorus is also used to make light emitting diodes. These LEDs contain metal phosphides such as those of gallium and indium.

In the natural world the elemental form of phosphorus is never encountered. It is only seen as phosphate, and phosphate is essential to life for numerous reasons. It is part of DNA, and also constitutes a huge proportion of teeth enamel and bones in the form of calcium phosphate. Organophosphates are also important, such as the energy molecule ATP and the phospholipids of cell membranes.

A normal diet provides our bodies with the phosphate it needs. With tuna, chicken, eggs and cheese having lots. And even cola provide us with some, in the form of phosphoric acid.

Today most of our phosphorus comes from phosphate rock that is mined around the world, and then converted to phosphoric acid. Fifty million tonnes are made every year and it has multiple uses. It is used to make fertilisers, animal feeds, rust removers, corrosion preventers, and even dishwasher tablets. 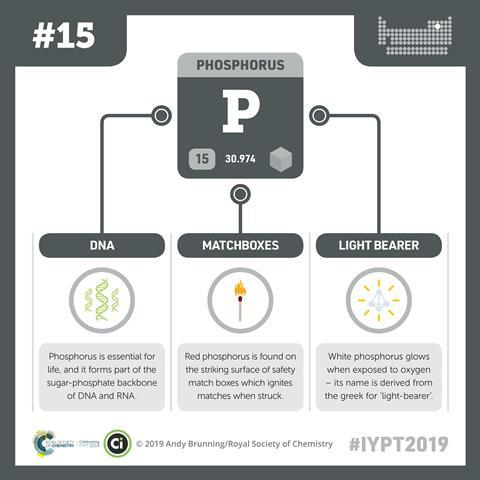 Some phosphate rock is also heated with coke and sand in an electric furnace to form white phosphorus which is then converted to phosphorus trichloride and phosphorous acid. And it is from these that flame retardants, insecticides, and weed-killers are made. A little is also turned into phosphorus sulfides which are used as oil additives to reduce engine wear.

Phosphate is also environmentally important. It naturally moves from soil, to rivers, to oceans, to bottom sediment. Here it accumulates until it is moved by geological uplift to dry land so the circle can start again. During its journey, phosphate passes through many plants, microbes, and animals of various eco-systems. 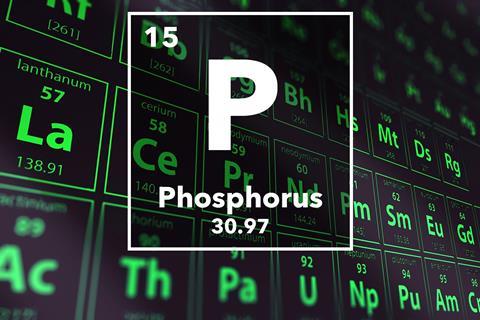 Too much phosphate however can be damaging to natural waters because it encourages unwanted species like algae to flourish. These then crowd out other forms of desired life. There is now a legal requirement to remove phosphate from wastewaters in many parts of the world, and in the future this could be recycled as a sustainable resource so that one day the phosphate we flush down sinks and toilets might reappear in our homes in other guises such as in dishwasher tablets and maybe even in our food and colas.

Nina Notman with the tale of phosphorus, the element extracted from the golden stream, otherwise known as urine. Next time Andrea Sella will be joining us with the explosive story of element number 53.

In 1811 a young French chemist, Bernard Courtois, working in Paris stumbled across a new element. His family's firm produced the saltpetre needed to make gunpowder for Napoleon's wars. They used wood ash in their process and wartime shortages of wood forced them instead to burn seaweed. Adding concentrated sulphuric acid to the ash, Courtois, obtained an astonishing purple vapour that crystallized onto the sides of the container. Astonished by this discovery he bottled up the greyish crystals and sent them to one of the foremost chemists of his day Joseph Guy-Lussac who confirmed that this was a new element and named it iode – iodine – after the Greek word for purple.

And you can hear more about how iodine exploded onto the world's stage on next week's Chemistry in its element, I hope you can join us. I'm Chris Smith, thank you for listening and goodbye.