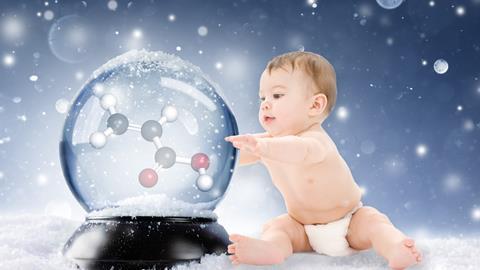 Need some fake snow for your Christmas party? Simply look inside a baby’s nappy.

This week, Kat Arney has a quick way to guarantee a white Christmas – all you need is lots of nappies…

There’s an unlikely connection between disposable nappies and fake snow: the chemical sodium polyacrylate, a polymer made up of long chains of repeated acrylic acid subunits joined together. In its dry powder form, positively charged sodium ions are tightly bound within a cage of polyacrylate chains, kept close by negatively charged carboxyl groups dangling from the polymer backbone. But add water, and the interactions change. Replaced by positively charged hydrogen ions in the water, the sodium ions are free to go on the move and the tightly organised polymer chains begin to unravel. They don’t completely separate and dissolve, however, instead forming a stiff, swollen gel. This clever chemistry means that sodium polyacrylate can absorb and lock away huge amounts of water – up to 300 times its mass in the case of tap water (which contains other metal ions that compete with the hydrogen ions) or up to 800 times the mass of ion-free distilled water. 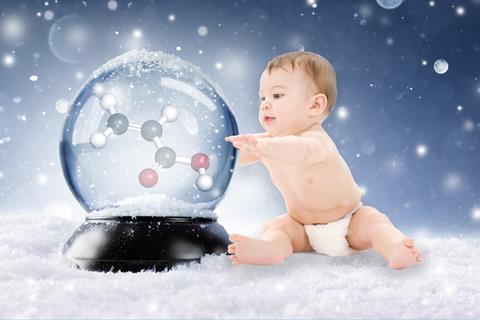 Sodium polyacrylate, a polymer made of long chains of repeated acrylic acid subunits, is an unlikely link between disposable nappies and fake snow.

Super-absorbent polymers, such as sodium polyacrylate, were first developed in the late 1960s by the US Department of Agriculture in search of ways to hold moisture in the soil more effectively. Early attempts were based on starch – a naturally-occurring polymer made from glucose sugar molecules strung into long chains, which swells up when water is added. They added other chemicals to the mix, such as acrylonitrile, acrylic acid, acrylamide and polyvinyl alcohol (PVA), and finally moved away from the starchy backbone altogether.

Eventually, researchers created polymers that could absorb hundreds of times their own weight in water, and keep it there. This was a big improvement on the options available at the time, including tissue paper, sponge, cotton wool or fluffy wood pulp, which can only manage to absorb around 20 times their weight in water. And the water can easily escape back out again.

By the 1970s manufacturers were quick to spot uses for these super-sucking polymers. First they were put to use in sanitary towels and adult incontinence pads. Disposable nappies (or diapers, for US listeners) came in the early 80s, followed by absorbent pads and baffles for industrial spills, and even absorbent suits for busy NASA astronauts unable to pop to the loo. 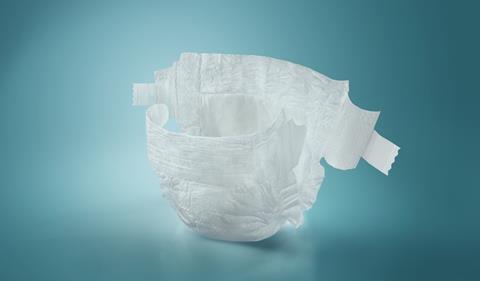 Disposable nappies are made using super-absorbent polymers like sodium polyacrylate.

Today, sodium polyacrylate is used as a thickener in hair gels and other beauty products, as well as in those jelly-filled cold packs that you pop in the freezer. It’s non-toxic, so very safe, although it can cause irritation and burns if it gets into the eyes. It’s also mixed into some types of coatings for electrical wires, to wick away water and keep them dry. And, of course, based on the original goal of those 1960s scientists, sodium polyacrylate and similar super-absorbant polymers have found a host of uses in agriculture, such as keeping soil or cut flowers hydrated.

But what about fake snow? When mixed with water, the properties of the resulting gel depend on the amount of crosslinking between the polymer chains. Sodium polyacrylate and similar compounds have relatively few cross-links, so the gel can swell a lot and suck up lots of water. But a different version, known as PolySnow™ has a lot more cross-links, and swells up to make tighter, dryer flakes that look a lot like snow, rather than the splodgy, wet gel found inside a nappy. When seen on screen in the movies, this kind of fake snow actually looks a lot more like snow than the real thing, and doesn’t melt – a property that is ‘snow joke’ for film directors trying to shoot winter scenes in warmer temperatures!

That was Kat Arney, with the unlikely link between fake show and astronaut toilet habits. Next week, Kit Chapman brings us an unusual material, inspired by war…

Pyke took the material to Lord Mountbatten, who was so excited he rushed to find Winston Churchill. Surprising the Prime Minister in the bath, Mountbatten dropped the icy block of wood pulp in with him.

Find out how the UK government attempted to build aircraft carriers from wood pulp and frozen water next week. Until then, get in touch with any suggestions – tweet @chemistryworld or email chemistryworld@rsc.org. I’m Ben Valsler, thanks for joining me.