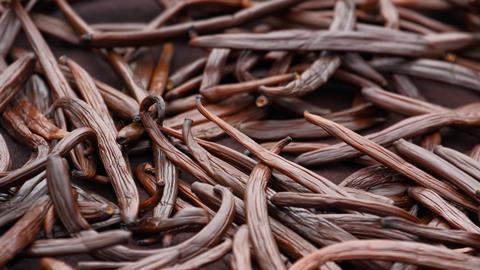 This week, one of my favourite compounds. Well, the multitude of products resulting from it anyway. Here's Simon Cotton:

People think of vanilla as a modern flavouring, but it was pre-Columbian peoples in Mexico - the Mayan and Aztec civilisations - who first realised the potential of vanilla. They mixed it with chilli peppers and honey to improve the flavour of their chocolate drinks.

The vanilla plant, Vanilla planifola, originates in subtropical forests in Mexico and parts of Central America. The Spaniards brought vanilla to Western Europe in the early 16th century. Once it was discovered that vanilla orchids could be fertilised manually, production of vanilla spread well beyond Central America. It has been grown in places as diverse as the Caribbean islands, Tahiti, Réunion, the Indonesian archipelago and Madagascar (the world leader). 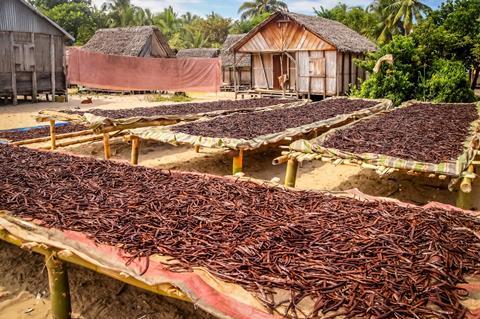 Freshly picked vanilla pods do not smell of vanilla, because the vanillin molecule is immobilised by being bound to glucose as a beta-D-glycoside. Enzymes get to work when the pods are cured; the pods gradually turn brown and shrivel up, and free vanillin molecules are liberated.

The smell of vanilla is due to 200 different odorant molecules, but vanillin is the main one.

Since the 19th century, demand has vastly outstripped production of natural vanilla, so people found ways of making synthetic vanillin. Nowadays over 95 per cent of vanilla flavouring comes from synthetic sources; people are so used to synthetic 'vanilla' flavour that they prefer it to the real thing, and may wonder about the tiny specks of vanilla seeds they find in an up-market ice cream. Along with the chocolate industry, ice cream uses about 75 per cent of vanilla flavouring, together with other foodstuffs like Coca-Cola and baked foods. 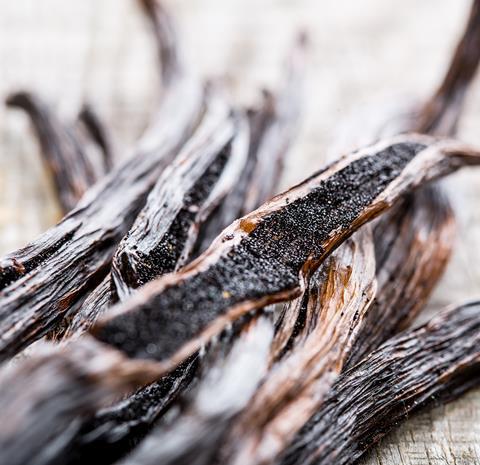 Chemists use vanillin in many syntheses, such as to make L-dopa, the Parkinson's disease drug, the antibacterial compound trimethoprin, and the heart drug papaverin. Vanillin solutions are used to develop thin layer chromatography plates, showing different types of compounds in different colours, and filling the lab with a heady scent.

The plant makes vanillin from the aminoacid phenylalanine. In the 19th century, chemists discovered ways of making it from eugenol, found naturally in cloves, nutmeg and cinnamon, and from guaiacol, which they got from pine tar. Another source is breakdown of lignin, a strengthening material in wood and plants. Storing wine or whisky in oak casks leads to vanillin molecules appearing in the drink, and cooking over wooden fires can likewise give a vanilla edge to the flavour of food.

In the past, a lot of vanillin came from the waste from paper mills. Recently, a Japanese scientist, Mayu Yamamoto, found a novel way of making vanillin. She extracted lignin from cow dung and converted that to vanillin. This discovery won her the 2007 Ig Nobel prize for chemistry, the send-up of the real Nobel prize. 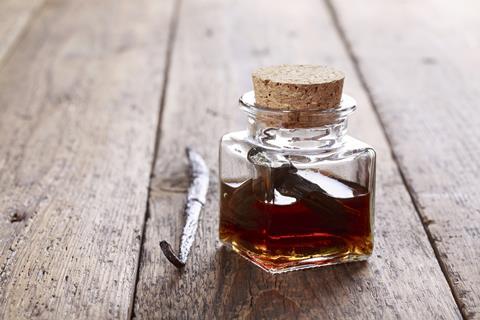 The easiest way to tell real and synthetic vanilla essence apart is to use Gas-Liquid Chromatography, which can spot the impurities like 4-hydroxybenzaldehyde present in natural vanilla essence, but the fakers can simply add these molecules. Another way is to look at the radiocarbon content, the amount of radioactive carbon-14. Natural plant-sourced vanillin contains a certain level of carbon-14, but since the half life of carbon-14 is 5730 years, vanillin derived from crude oil has no radiocarbon, since it has decayed away over the millions of years the oil was trapped underground. But determined forgers started putting some carbon-14 adulterated molecules into their fake vanilla extract.

To counter that, the analysts started looking at the ratio of the natural isotopes, carbon-12 and carbon-13. Because the vanilla orchid uses a different biosynthetic pathway to other plants, orchid-derived vanillin has a greater ratio of carbon-13 to carbon-12 than synthetic vanillin. The fraudsters hit back by doping their synthetic vanillin with molecules containing extra carbon-13. However, the fraudsters cannot get a uniform level of carbon-13 at all the carbons. Instead they tend to concentrate it at the aldehyde and methyl groups, and this can be spotted by chemists who use the aptly named site-specific natural isotope fractionation NMR (SNIF-NMR)

One important use of vanillin is in perfumery. Until the 1880s, perfumes tended to rely entirely on plant-derived molecules. Then, in 1889, Aim? Guerlain introduced the concept of a perfume with a top note, a middle note and a bottom note, the result being Jicky, a key ingredient being synthetic vanillin in the base note. In 1925, Guerlain's nephew Jacques used the stronger-smelling ethyl vanillin, which does not occur in nature, to create another great perfume, the sensual Shalimar.

It was the Aztec leader Moctezuma who dropped the hint to Hern?n Cort?s, leader of the Spanish invaders, that vanilla flavoured drinks were a very useful aphrodisiac.

Don't let anyone tell you that vanillin is boring and unsexy.

Certainly not! In fact, with all those attributes, consider it a compliment to be called 'vanilla'. That was Birmingham university's Simon Cotton with the sweet and tasty chemistry of vanillin. Now, next week, a compound fought over when ending the war.

Chemical compounds crop up in all sorts of places, but no one would look for one in the treaty that ended a war.

On the 28th of June 1919, the treaty of Versailles was signed, laying out the formal reparations that would be laid on Germany at the end of the first world war. As might be expected, much of the treaty was concerned with boundaries and military restrictions. But it also had a significant financial component, and there among the huge payments and heavy industry provisions for steel and coal was the freedom to use the name 'aspirin'.

Meera Senthilingam
And to find out the chemistry causing these countries to fight over the compound aspirin, join Brian Clegg in next week's Chemistry in its element. Until then, thank you for listening. I'm Meera Senthilingam.