Ask any chemists what element they think of when they hear ‘cross-coupling’ and the answer will most likely be palladium. But it turns out that phosphorus – as Andrew McNally calls it, an ‘unfashionable reagent’ – outclasses palladium when it comes to connecting pyridines.

Since their development in the 1970s, cross coupling reactions have become the medicinal chemists’ favourite. They form carbon–carbon bonds by reacting an organohalide with an organometal or alkene. Today, there are countless different cross-coupling variants, most catalysed by palladium.

‘But these are not very good when it comes to coupling electron-deficient heterocycles, in particular pyridines and diazines,’ McNally says.

Although nitrogen heterocycles are part of many drugs, such as the cancer medication imatinib, they often prove challenging for palladium. They can bind to the catalyst, killing its reactivity. Even just making the corresponding cross coupling precursors – like halogenated pyridines or pyridine boronic acids – is notoriously difficult.

McNally and Robert Paton from Colorado State University, US, and their team have discovered that phosphorus – an element better known for its role in palladium ligands – excels at making these connections. 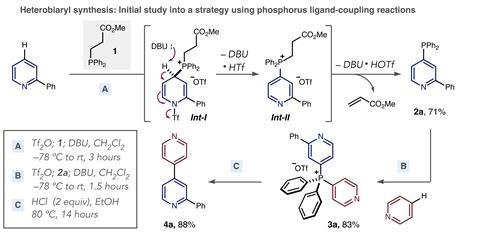 The phosphorus reagent is relatively easy to form, with readily accessible reagents and conditions

Their reagent – a phosphine carrying two phenyl and one methyl propanoate substituent – makes carbon–carbon bonds between pyridines. McNally describes the two-step reaction sequence as operationally simple, using reagents everyone can get their hands on.

The phosphine handles compounds with various functional groups, such as amines and chlorides, that palladium catalysts can’t. Even attaching pyridine to the tricyclic ring system in the hayfever drug loratadine is no problem.

In the reaction, phosphorus behaves not unlike a transition metal, McNally explains. Phosphorus’ ligand coupling mechanism – initiating carbon–carbon bond formation by expelling two of its ligands – is similar to reductive elimination from palladium. ‘These reactions were not completely unknown, but they were regarded as esoteric and no-one really took advantage of them,’ says McNally. 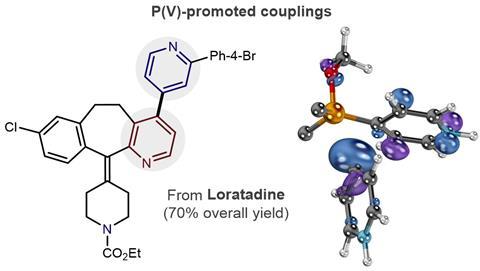 Josep Cornella, a catalysis chemist at the Max Planck Institute for Coal Research, Germany, calls it a beautiful and elegant approach. ‘I’m pretty sure people in medicinal chemistry would love this methodology,’ he says.

‘The challenge remains in achieving every cross coupling you want, because the phosphine is going into the 4-position of the pyridine,’ Cornella continues. ‘It would be great if they could find a way to functionalise position 3 of plain pyridines.’

While the reaction requires a stoichiometric amount of phosphorus, the reagent is cheap when compared with transition metals. The team is now looking into adapting the reaction to sp2–sp3 couplings.