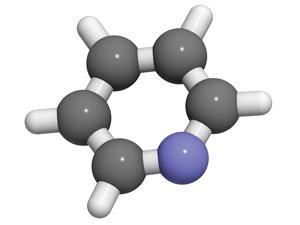 Brian Clegg holds his nose to examine one of the real workhorses of the organic chemistry lab: Pyridine

The organic compounds that catch the attention tend to be the big, flashy numbers like DNA, but some of the real workhorses of the organic chemistry lab are simple compounds, like pyridine – a benzene ring with one of its carbons (and the associated hydrogen) replaced by a nitrogen atom. Because it is has more than just carbon in the ring, it is known as a heterocyclic aromatic compound. 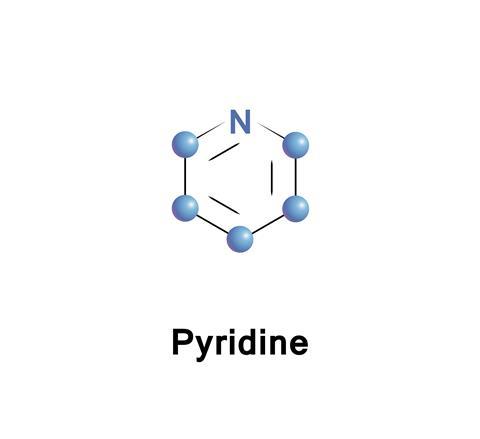 When the Scottish chemist Thomas Anderson discovered pyridine in 1849, first isolating this clear, colourless liquid two years later, it was doubtless the smell that first attracted his attention, a deeply unpleasant odour that is usually described as fishy. It has been described as the stink of ‘an unventilated room, full of the infirm and dying’ or simply ‘sour and putrid.’ Anderson separated the pyridine from oil that was obtained from heating animal bones to a high temperature. The new substance was highly flammable, and so he called it pyridine, a combination of the Greek pyr for fire with the ‘idine’ ending for an organic compound containing nitrogen – probably inspired by the name ‘pyrrole’ given to the similar five membered ring in the 1830s.

The compound’s structure would remain uncertain until the late 1860s when there were independent proposals from both the German chemist Wilhelm Körner and the Scottish chemist and inventor of the vacuum flask, James Dewar. Körner is usually attributed with getting there first, with his publication of the structure in 1869 in the obscure Italian journal Giornale di scienze naturali ed economiche, while Dewar first mentioned it in a paper read at the Royal Society of Edinburgh in 1870. But there was a drama behind the simple jostle for priority – Dewar claimed that Körner had stolen his idea.

The two scientists worked together in Kekulé’s Belgian laboratory in 1867, where they were described as a ‘wild pair’, fond of practical joking, and Dewar claimed that he had already conceived the idea by then and shared it with Kekulé and Körner, only to discover that his friend published Dewar’s concept as his own. Dewar never publically questioned Körner’s priority, and it quite likely that Körner, who was arguably a better organic chemist that Dewar, did not steal the ideal consciously. But Dewar clearly felt slighted when he wrote to Kekulé that the idea ‘que je m’avais faite’ had been presented by Körner to the Palermo Academy. ‘Coming from a friend,’ Dewar wrote, ‘I don’t like it.’

Production methods for pyridine, primarily based on extracting it from coal tar in a slightly more sophisticated version of Anderson’s original, remained poor until the 1920s when the Russian chemist Aleksey Chichibabin found a mechanism to produce it from formaldehyde, acetaldehyde and ammonia. Today tens of thousands of tonnes of pyridine are produced each year, mostly by enhanced techniques, as the basic Chichibabin method is only around 20 per cent efficient.

Like a lot of simple organic compounds, pyridine mostly makes itself useful as a precursor for producing more sophisticated molecules. Its biggest role is in the production of herbicides, notably the ubiquitous diquat and paraquat, while also providing a building block for some insecticides, antiseptics and antifungal agents. The toxic qualities of these derivatives can in principle also be applied to humans in the powerful pyridine-derived nerve agent with the uncatchy name 4-692-530-01. Less controversially, pure pyridine is also a good solvent, particularly in acylation, dehydrochlorination reactions and the extraction of antibiotics. It turns up in a solvent role commercially in both rubber and dye manufacturing. 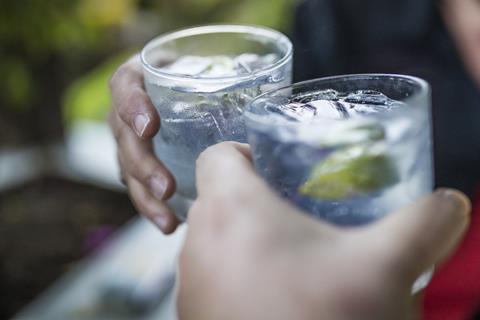 Picking up on its unpleasant smell, and the associated taste, pyridine is sometimes added to alchohol to ‘denature’ it – making it unsuitable for drinking – and in small quantities to make foodstuffs bitter, but it doesn’t have as strong an impact on the tongue as denatonium benzoate, and is more potentially harmful to humans. Pyridine produces unpleasant symptoms both when ingested and absorbed through the skin, ranging from nausea and dizziness to abdominal pain, unconsciousness and death. However, this nasty side of pyridine doesn’t prevent it also being used in the manufacture of food flavouring, vitamins – notably niacin – and medicines.

There is no doubt that pyridine with its rotting fish odour and distinctly poisonous nature is not the kind of compound you want in the kitchen cupboard. But this simple organic structure makes a great building block for essential agrichemicals – and deserves our respect, even if we have to hold our noses while acknowledging it.

Science writer Brian Clegg there, with the poisonous yet useful chemistry of pyridine. Next week, from odour to colour.

From Chinese lacquerware to medieval European masterpieces, to meso-American civilisations, this simple compound has been used everywhere.

Neil Withers will enable the chemistry enabling this diversity, of the compound vermilion, in next week’s Chemistry in its Element. Until then, thank you for listening, I’m Meera Senthilingam.