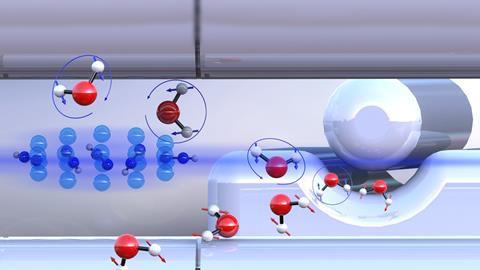 It may be the most familiar molecule in chemistry, but H2O is far from simple. Now researchers in Switzerland and Germany have added to our understanding of water’s complexity by proving that its spin isomers react at different rates.1

All water molecules exist as one of two spin isomers, depending on whether the individual nuclear spins of a water molecule’s two protons are parallel (ortho) or antiparallel (para) to each other. In the liquid, ortho and para water are being interconverted all the time by exchange of protons. But lone molecules remain in one form or the other, and can in principle be separated.

The different spin states of para and ortho water interact differently with an electric field, which can be used to separate the isomers

These different forms would seem to be chemically identical – in contrast to water molecules differing in their hydrogen-isotope constitution, say – but they actually have a subtle difference. The allowed rotational states have to satisfy certain symmetry requirements according to the Pauli principle that constrains their quantum wavefunctions. The protons are indistinguishable in the ortho form but not in the para form, and this means the two forms must have different ground states: the absolute rotational ground state for para, the first excited state for ortho. These differences in rotational state might manifest as differences in the collision cross-sections, which would mean the forms have different reactivities.

But do they? ‘The challenge in studying their reactivities is to combine a separation method with a highly sensitive reaction experiment,’ says Stefan Willitsch of the University of Basel. That’s what he and his coworkers have now done: reacting ortho and para water with diazenylium ions (N2H+) to give N2 and H3O+ – a process that happens in interstellar clouds.

The researchers create a molecular beam of water molecules by sending them in a jet of cold, inert carrier gas (argon) through a nozzle at supersonic speeds. They passed this beam between two electrically charged plates, which deflects ortho and para molecules to different degrees. The separated beams were then fired at N2H+ ions dispersed within a cloud of cold calcium ions held in an electrostatic ion trap. 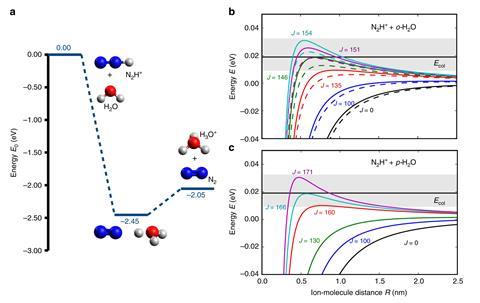 The reaction is faster for para water because it has a lower rotational ground state, resulting in less averaging of water’s electric dipole and strengthening the interaction between water and N2H+

After some time, the ions are released and the products are sent to a mass spectrometer for analysis. By measuring the formation of H3O+ for molecular beams with different ratios of ortho/para water, the researchers found that the reaction rate was slower for the ortho form by about 23%.

Quantum-chemical calculations of the reaction showed that the difference in reactivity comes from the electrostatic interaction between the N2H+ ions and the electrical dipole of the water molecules. Rotational motion of H2O causes averaging of the latter – but because the rotation is different for ortho and para water, so too is the average.

‘Ortho water rotates faster, and therefore the long-range ion–dipole interactions are averaged out to a larger extent, so the attractive forces between the reaction partners are weaker,’ Willitsch explains. This leads to a smaller impact parameter – a measure of the effective ‘size’ of the molecule in reactive encounters – for ortho water.

‘A 23% effect is quite significant,’ Willitsch adds. It would not matter much at room temperature, where the molecules are highly rotationally excited anyway, but could be important for gas-phase reactions at low temperatures, as in interstellar clouds.

‘This is a very interesting paper, and it seems to me the results and conclusions are very sound,’ says physical chemist David Clary of Oxford University, who predicted 30 years ago that different rotational states of H2O should have different reaction rates.2