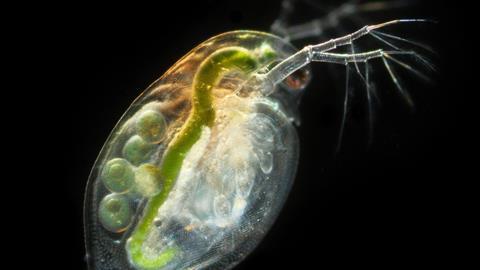 By looking at the effects of graphene on water fleas, scientists in China have discovered that it may disrupt aquatic ecosystems, suggesting an unfortunate dark side to the wonder material.

Graphene, the poster child of carbon nanomaterials, has been extensively studied in recent years, and has shown great promise in fields ranging from materials chemistry to electronics and medicine. However, until now its toxicity to aquatic organisms has not been a serious concern.

Wenhong Fan and his team at Beihang University suspended a range of carbon nanomaterials in water and observed their effects on daphnids, also called water fleas, a model organism for water pollution tests. At concentrations above 0.5mg/l graphene significantly impaired their growth and reproduction over a period of 21 days. Fan speculates this is caused by adsorption of graphene onto the daphnids’ surface. Other carbon nanomaterials, including buckminsterfullerene, single walled carbon nanotubes and multi-walled carbon nanotubes, proved more benign.

This study is one of the first to demonstrate graphene’s long-term ecological effects on aquatic organisms. ’The results of this study will be an important reference for the environmental risk assessment of graphene-related materials,’ says Xinghui Xia, an expert in environmental science at China’s Beijing Normal University.

‘I think the results of [these studies] will provide extremely useful information for understanding the actual ecological toxicity effect of graphene. And, this study may set off alarm bells,’ reflects Fan. ‘The uncertainties surrounding graphene toxicity must be better resolved before its technological innovations can be fully realised.’

Many graphene-based materials are now entering the market, with modifications to their surface chemistry being used to optimise them for specific uses. Fan intendeds to expand his research to investigate the effects of such modifications on their toxicity.