Polymers pervade nearly every part of our lives, and almost everyone knows how useful these long-chain molecules are. Meanwhile, any high-school chemistry student can tell you that metal complexes have many interesting properties like redox behaviour, catalysis and magnetism. But is it possible to get the best of both worlds?

Slowly but surely, chemists have developed ways to make a range of polymers with the same exciting physical and chemical properties as metals, without sacrificing the mechanical strength and ease of processing found in conventional plastics. This has opened up plenty of potential applications for these materials, from nanotechnology to fuel cells, chemical sensors to catalysis. 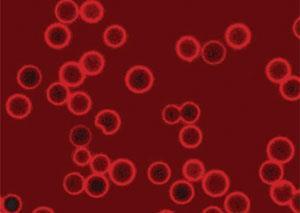 Organometallic polyferrocenylsilane capsules can be used to release drugs

Although the field has a long history – the first soluble metal-containing polymer, poly(vinylferrocene), was prepared in 1955 – truly useful materials have only begun to emerge in recent years.

‘The problem has been a synthetic one,’ explains Ian Manners of the University of Bristol, UK. ‘The literature is littered with low molecular weight, insoluble materials’ that are claimed as metal-containing polymers, he adds. But reliable production of soluble polymers that can be coated onto devices as thin films has long been elusive.

Unfortunately, the classical polymerisation techniques don't lend themselves to metal-containing monomers. These methods generally rely on reactive chemical groups to knit the molecular chains together, but these groups also tend to break down metal complexes. And the high purity and precise stoichiometry of reagents are notoriously difficult to achieve with the metallic monomers. While ferrocene has long been a popular candidate for inclusion into polymers, for example, stringing these complexes into chains has been dogged by such problems.

But in 1992, while based at the University of Toronto, Canada, Manners’ group discovered a technique for making high molecular weight polymers from strained cyclic ferrocenophanes, in which the two cyclopentadiene rings are bridged by a silicon atom which tilts them so that they are no longer parallel to each other. Manners found that heating broke the strained molecules apart, initiating a reaction that forms a chain of ferrocene units linked by silane groups, dubbed polyferrocenylsilane.

This ring-opening polymerisation (ROP) method has been adapted to incorporate a variety of different substituents on the silicon atom. Adding long alkyl chains gives control over solubility, allowing easier processing and characterisation by conventional solution-phase methods such as 29 Si NMR and gel permeation chromatography.

Perhaps the most useful characteristic of this chemistry is that the polymerisation can be ‘living’, meaning the chains keep growing until there is no more monomer available. Manners found the reaction can even be switched on and off by exposure to light, giving unprecedented control over the overall length of the polymer chains. Using mild bases to open up the strained ferrocenophanes means that a wider range of less tolerant functional groups can be used as silicon substituents, and Manners is hoping to expand the methodology to use ‘loads of different metals and bridging ligands’.

The physical properties of the polymer can be controlled by the oxidation state of its iron atoms. ‘If you have a lightly crosslinked sample, with all the iron in the Fe(ii) state, it will swell with a non-polar solvent such as toluene to form a gel,’ he explains. ‘But if you oxidise the metal, the gel contracts to limit the less favourable interactions between the cationic Fe(iii) metal centre and the solvent.’

This behaviour has led Manners and collaborators to encapsulate sheets of tiny light-scattering silica microbeads in the gel. Swelling and contracting the gel changes the spacing between these sheets, which varies the wavelength of the light they scatter. They envisage that this sort of stimulus-responsive ‘photonic crystal’ could be used to make the coloured pixels in visual displays.

The same approach has produced tiny capsules that could be used to release a smaller molecule, such as a drug, in response to the presence of an oxidising agent. Julius Vancso and his colleagues at the University of Twente, the Netherlands, made the walls of the capsules from alternating layers of positively and negatively charged polyferrocenylsilane derivatives around a removable colloid template.

Oxidation of the iron in the ferrocene units causes the polymer chains to move apart by electrostatic repulsion, allowing fluorescently-labelled dextran molecules to diffuse into the capsule. The swollen package could then be sealed up by returning the iron atoms to their original state with a reducing agent. Vancso and his team reason that if molecules can be allowed into the capsules, they can be controllably released too, leading to possible applications in medicine.

Metallopolymers tend to be classified by where, and how, the metal is attached to the chain. For example, the metal can be a part of the polymer backbone, or may be part of a group dangling from the chain, where it exerts less of an influence on the polymer's properties. 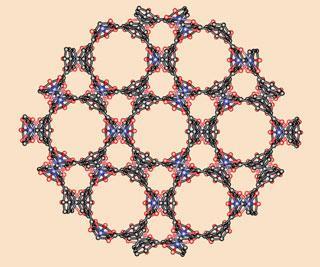 Most chemists in this area also distinguish between materials where the metals are strongly (often covalently) bound to the polymer, and supramolecular polymers, where self-assembly through metal-ligand interactions is the driving force to produce large structures. The bonding in these systems is often weaker, allowing for polymer chains of this type to be broken up if desired.

The so-called coordination polymers, another subset of this group, are 3-dimensional crystalline networks formed by multiple metal-ligand bonding. ‘There's a level of confusion,’ admits Neil Champness of the University of Nottingham, UK, whose group produces these materials but prefers the term ‘coordination framework’. These materials are desirable for the tiny cavities inside them, produced when rigid ligands bridge metal centres, and have been used to design materials that can store relatively large amounts of hydrogen gas.

Research into electrically-conducting polymers has moved at breakneck speed since oxidised polyacetylene was found to be a good conductor in the 1970s. Tim Swager of the Massachusetts Institute of Technology, Cambridge, US, has been involved in the field right from its early days, and since the mid-90s has been working to include metal ions in his materials.

Polymers can conduct electricity when their pi electrons are free to move along the polymer chain. Coupling these delocalised electrons with a metal's d-orbitals can alter the properties of both components in interesting ways. For Swager, the link between the two types of compound is logical: ‘Conducting polymers are redox. Metals are capable of extraordinary redox chemistry. This is a natural fit.’

The main limit to a polymer's conductivity lies in how well it transfers charge between ‘segments’ of delocalised electrons on individual chains. Swager designs his redox-matched materials so that the metal centres connect these segments, allowing the electrons to jump from one to the next ‘like hopping on stones across a creek’.

By closely matching the redox potentials of the metal centre with that of the conjugated polymer, Swager believes you can improve the way charge moves through the material. In materials that are ‘redox-matched’ in this way, Swager's team has seen significant improvements in conductivity, making them suitable for use in chemical sensors.

Swager describes the metals in these polymers as ‘hot spots’ that control their sensitivity to other molecules. Any change to the metal's environment – when it binds an analyte molecule, for example – produces a clear change in the conductivity of the whole polymer.

In these cases the properties of the polymer are modified by metals, but in catalysis it can work the other way around. In numerous processes, metal catalysts speed up reactions by cycling between oxidation states, giving out or taking up electrons that take part in the reaction. If the metal is hooked up directly to an electrode as part of a polymer film, that electron transfer can be speeded up considerably. This increases the number of catalytic cycles that can be performed, and also means there is no need to worry about recovering the catalyst from the reaction mixture. Since oxygen reduction is the key to fuel cell technology, Swager's team hopes that its family of cobalt-containing polymers based on polythiophene could be used as fuel cell catalysts.

Most conducting polymers change colour when a voltage is applied to them, since oxidation disrupts the electronic transitions responsible for the absorption of light. This is one of the most commercially promising applications of plastic electronics. Transparent electrodes, such as glass coated with indium tin oxide, can be covered with a polymer film by electropolymerisation and used, for example, as anti-glare rear view mirrors in cars, or as windows that cut out light at the flick of a switch.

Transition metal complexes can take on a spectacular array of colours, and this property hasn't escaped the polymer treatment either. Coating the materials onto an electrode allows access to a wide palette of colours controlled by an electrical current. ‘In principle, a huge number of metal-containing materials will show electrochromism,’ says Roger Mortimer of Loughborough University, UK. He uses complexes of ruthenium with bipyridyl ligands which are substituted with vinyl groups to form electrochromic films. The metal complexes sit within a non-conducting polyethylene framework, where conduction is achieved by transfer of charge from one metal complex to another.

The ruthenium complex normally lends the film an orange colour, but when an electrical current oxidises Ru(ii) into Ru(iii), the film becomes transparent. Reversing the potential reduces the metal again, and the film gets its colour back.

Metals with more than two oxidation states, or even mixed-metal films, could give rise to transitions between several different colours, Mortimer explains.

‘Ultimately, of course, developing applications will be the true test of the success of the metallopolymer field in the next five to 10 years,’ says Manners.

While sensors and visual display applications are likely to see the first of these successes, Swager also sees great potential for solving some of the problems of our spiralling energy demands. ‘Imagine,’ he says, ‘that you've got solar panels on your roof. They can dump their power into the grid or a battery.’ But both are inefficient processes, so why not put the energy into chemical bonds, he suggests.

Carbon dioxide can be reduced to useful compounds such as methanol, and Swager believes that metallopolymers could be well-suited to use the current from a solar panel to catalyse this reaction.

If – and Swager admits that this is a big ‘if’ – a suitably efficient material could be developed, it would mean using a greenhouse gas as a source of a recyclable fuel. 'If you could do this,’ he says, ‘you'd get a Nobel prize.’

Tom Westgate is a freelance science writer based in Manchester, UK