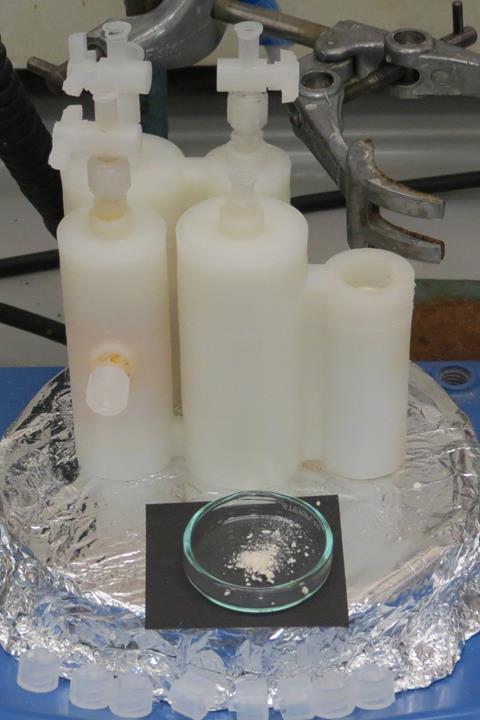 Producing hard-to-get organic chemicals is now as simple as assembling Ikea furniture, according to a group of chemists at the University of Glasgow. The team’s latest adventure into 3D-printed reactionware spawned small modules that slot together to do 12 process steps. Team leader Lee Cronin foresees organic chemists developing modules that enable non-specialists to easily make substances experts might now have to slave away at to synthesise. ‘The chemist now becomes a digital designer,’ Cronin tells Chemistry World.

‘By connecting these vessels and following a simple protocol, basically a child can prepare pharmaceuticals’

Thus provoked, the Glasgow team conceived digital blueprints that capture synthesis steps in a standard format, ‘like an MP3 for music’, Cronin says. Loading the blueprint onto 3D printers might then fabricate dedicated reactors, tailored specifically for the reactions, extractions and crystallisations required for one substance. Extending the music analogy, Cronin suggests that chemists upload blueprints to something like Spotify, earning royalties from downloads. In this vision, people wanting to make substances wouldn’t need 3D printers. ‘The reactor would be fabricated elsewhere. You get the reactor, and a reagent kit in prefilled syringes.’

To prove the concept but avoid illicit use, Cronin and his colleagues developed a blueprint for the cheap and readily available muscle relaxant baclofen. They designed five opaque cylindrical modules, each holding up to 32ml, with openings in their tops to let material in. Through second openings in their tops users can apply pressure to force reaction material through openings at the modules’ bottoms. The chemists also gave the chambers ports through which users can introduce nitrogen, providing reactions with inert atmospheres.

The Glasgow researchers printed modules on Ultimaker 3D printers, which cost as little as £1350. They paused the printing to insert magnetic stirrer bars for modules in which reactions happen, hydrophobic filters in those where extractions happen and fritted glass filters in filtration modules. They could then heat or cool and stir modules using conventional stirrer hotplates. Otherwise, the setup is more like a mini-chemical plant than the Pyrex-based glassware often seen in fumehoods. ‘The chemist doesn’t have to get their hands dirty,’ Cronin says.

Starting from 200mg of commercially available methyl 4-chloro-cinnamate, the first module added a carbon and a nitrogen atom through a Michael addition reaction. The same module then evaporated solvent and did a simple solvent extraction purification. The second module reduced the molecule, formed it into a new ring, and exchanged solvents before another solvent extraction in the third module. The fourth module exchanged solvents again to reopen the ring and make baclofen. The final module, which is open so that users can retrieve their product, crystallises the molecule as a solid and filters it out, avoiding more expensive purification options. 40 hours after the process started the chemists scraped out 98mg of baclofen, which exceeded 95% purity. 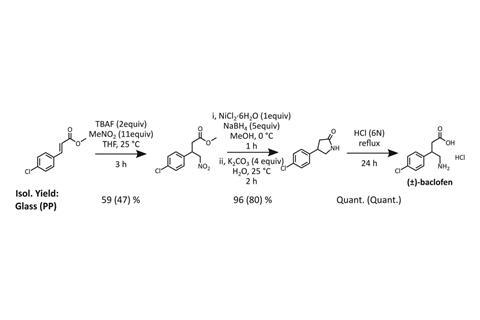 Cronin stresses that there are molecules that need this approach much more than baclofen. These include photolabels for proteins and tracers used in radiology, which both degrade rapidly. His team is also looking at expensive substances. ‘Lots of compounds that are extremely important for chemistry, biology and medical science cost more than $1 million (£720,000) per mole,’ he adds. ‘We’ve been starting to make kits for these and it cuts the cost dramatically.’

Only around 10% of drugs discovered in the last century are currently available, Cronin estimates, opening up other opportunities. Were regulators to approve a modular system for a drug ‘it becomes available in essence forever’, he claims. The Glasgow researcher recognises that this would ‘require a completely new system for regulation’, but is encouraged by a meeting with the US Food and Drug Administration (FDA). ‘I thought the FDA would take me apart, but they said “We love this because you’re making standard modules for doing chemistry”.’

Yet the UK’s Medicines and Healthcare Regulatory Authority (MHRA) must currently inspect every single manufacturing location for drugs sold in the country, underlines an MHRA spokesperson. However, they add that innovations can create new business and regulatory models, for example by collaborating with the MHRA’s Innovation Office. While its focus is on new medicinal products, or improved existing products, the MHRA is ‘open to such novel manufacturing technology’ if it consistently meets required standards, the spokesperson notes.

Timothy Noël from Eindhoven University of Technology agrees that regulation will be important, otherwise the approach could be used to make narcotics or counterfeit medicines. ‘By connecting these vessels and following a simple protocol, basically a child can prepare pharmaceuticals,’ he comments. Nevertheless, the Glasgow team’s concept should improve organic chemistry’s reliability because, by digitising process details, ‘in principle all syntheses should be completely reproducible’, Noël says. ‘The importance of this cannot be overestimated.’

Victor Sans Sangorrin from the University of Nottingham, UK, calls the paper ‘fantastic’ with ‘a number of breakthrough aspects’. Even a key limitation – polypropylene’s incompatibility with some conditions – could be seen as a strength. The chemistry still works and the milder conditions polypropylene imposes are more desirable anyway. ‘This work represents an impressive leap forward’ and could deeply influence the ways synthetic routes are devised and implemented, Sans says.