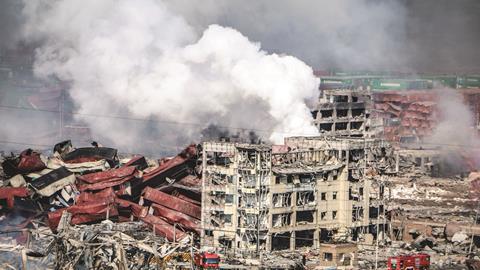 In the wake of the Tianjin Port explosions, China’s chemical industry should impose a more systematic regulation system and intensify its ongoing industrial reshuffle to reduce the risk of accidents, according to experts.

On 12 August 2015, a chemical warehouse in Tianjin erupted in an explosive blaze that killed 165 people, including 99 firemen, 11 police and 55 civilians. It is China’s largest and deadliest chemical accident and has prompted the Chinese government to enhance safety monitoring, close down thousands of smaller chemical plants and relocate more than 1000 to chemical parks in less populous regions.

In late June, the State Administration of Work Safety (SAWS), the major watchdog for chemical safety regulation, reported that there had been no major chemical accidents (having a death toll of 10 or more) in the first half of 2016, although 32 people died in large accidents (with a death toll of 3–9). However, a Greenpeace report released in September indicates that 199 people died in 232 chemical incidents in the first eight months. Unlike the SAWS, Greenpeace did not distinguish the severity of accidents .

‘We calculated the official number released by the SAWS, as well as deaths and injuries reported by professional industrial sites, mass media and social media,’ says Cheng Qian, a pollution prevention project manager at Greenpeace China.

The day before Greenpeace released its report, an equipment explosion at Yantai-based fine chemical maker Wanhua, a major manufacturer of methylenediphenyl diisocyanate (MDI), killed four workers and injuring another four.

While explosions like the one at Wanhua attract more media attention, Greenpeace says chemical leaks are much more common, accounting for 43% of all accidents and 47% of injuries. While less common, explosions, fires and poisonings account for three quarters of all deaths.

‘The transparency and safety governance in the chemical industry are far from adequate for China, the world’s largest chemical manufacturer,’ Cheng tells Chemistry World.

Using GPS tagging, Greenpeace has shown that industrial accidents are concentrated in the highly populated eastern provinces of Shandong and Jiangsu, as well as Guangdong in the south. The report also indicates that around 18% of the nation’s chemical plants are located in environmentally sensitive areas, particularly along major rivers and water sources.

The Chinese government is moving to address the problem. Since last year, even before the Tianjin blast, it has pushed smaller chemical plants to close, and relocated larger ones into chemical parks that are equipped with better safety measures.

In Shandong, the provincial government has closed more than 1000 plants since 2015 and forced a further 125 to move to chemical parks. It also said it will decline any new chemical project with an investment of less than 100 million yuan (£12 million).

Despite the push, Ye Yingmin, general manager of Beijing-based chemical consulting firm Chem1, says it is unrealistic to expect the majority of plants to relocate to less populous areas of central and western China.

The concentration of chemical industry in Shandong, Jiangsu and Guangdong is caused both by their proximity to their market and supply chains, including sea ports, Ye adds. In addition, the cost of relocating chemical plants is even higher than building new ones. ‘Rather than pushing the chemical industry into the Chinese hinterland, provincial governments are more interested in encouraging them to move within the same province, often from major cities’ suburbs to newly constructed or updated chemical parks in less wealthy mountainous areas,’ Ye says. Increased land prices in plants’ original locations can help cover relocation costs.

With freight transport capacity on traditional railways liberated thanks to China’s burgeoning high-speed railway development, some chemical plants are moving westward to reduce costs. ‘Free competition should enable the relocated plants, with their lower costs, to triumph over those remaining in coastal areas, rather than forcibly pushing away all chemical plants,’ Ye says.