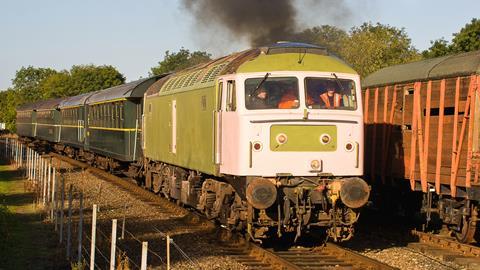 Travelling on a diesel train can expose you to far higher levels of harmful particulates than standing beside a busy road, a Danish study has found. Diesel exhaust is associated with an increased risk of lung cancer, as well as other lung and cardiovascular diseases.

Those sitting on carriages being pulled by a diesel engine, especially close to the engine, breathe in a much larger dose of diesel fumes. Measurements revealed that ultrafine particles were 35-fold higher and black carbon or soot six-fold higher inside carriages pulled by diesel trains versus electric.1 Ultrafine particles are often carbon nanoparticles, coated with hydrocarbons and metals.

‘Ultrafine particles are of most concern because they are believed to go deeper into the lungs,’ says lead author Maria Helena Andersen at the University of Copenhagen. Ultrafine particle levels exceeded 200,000 particles/cm3 inside carriages pulled by diesel engines, whereas a busy street in Copenhagen averaged 40,000 particles/cm3. These particles have been linked to sluggish cognitive development in children and neurocognitive diseases in older adults.

The team found that someone sitting in the front carriage pulled by a diesel engine is exposed to average concentrations of 400,000 particles/cm3. Levels of black carbon and ultrafine particle were also elevated for those catching the first morning train, possibly because the engine was ‘cold’ and running at suboptimal efficiency. Co-author Ulla Vogel at the Technical University of Denmark says rail companies should prioritise replacing diesel engines with newer, more environmentally friendly trains.

The authors also calculated the increased risk of lung cancer railway workers faced from elevated black carbon levels. The researchers estimate that there would be around 160 more lung cancer deaths per 10,000 rail workers over a lifetime.

Greg Evans at the University of Toronto, Canada, notes that a Dutch study recommended 1μg/m3 of black carbon as an upper limit for occupational exposure based on cancer risk, whereas passenger carriages pulled by Danish diesel trains had 20μg/m3 of soot inside. ‘These levels do suggest excessive exposure to diesel exhaust,’ he adds.

Evans previously reported that diesel trains pulling carriages in Toronto, Canada, had 18 times higher concentrations of ultrafine particles than those being pushed.2 ‘I would recommend to passengers, particularly those susceptible to exposure, such as asthmatics, to sit as far as possible from the engine when the train is being pulled,’ Evans advises. ‘When the train is being pushed the air quality is a lot better [everywhere].’

The diesel trains in the Copenhagen study date from the 1980s and newer diesels may not be as polluting, however. The Copenhagen team now plan to investigate health biomarkers in the 29 volunteers who carried the monitoring equipment on these trains.